Won’t You Please Run Over Me?

While I’ve been looking at Frank solo and his work with the Catholics, and I’m not totally out of such material, I’m finding them harder to write much about. Besides, I’ve already written my basic opinions about most of them, even if I didn’t go song-by-song. I might get back to them at some point, but for now I’m going to examine the Pixies’ first EP and album, Come On Pilgrim and Surfer Rosa. In the early days of the band, Frank (or Black Francis as he was then known) wrote a lot of loud songs about sex, and tended to use quite a bit of bad Spanish and uncomfortable lyrics. The science fiction and history would mostly come later, but there are some hints of that stuff. For instance, quite a few of these early works make reference to bizarre parts of the Bible. 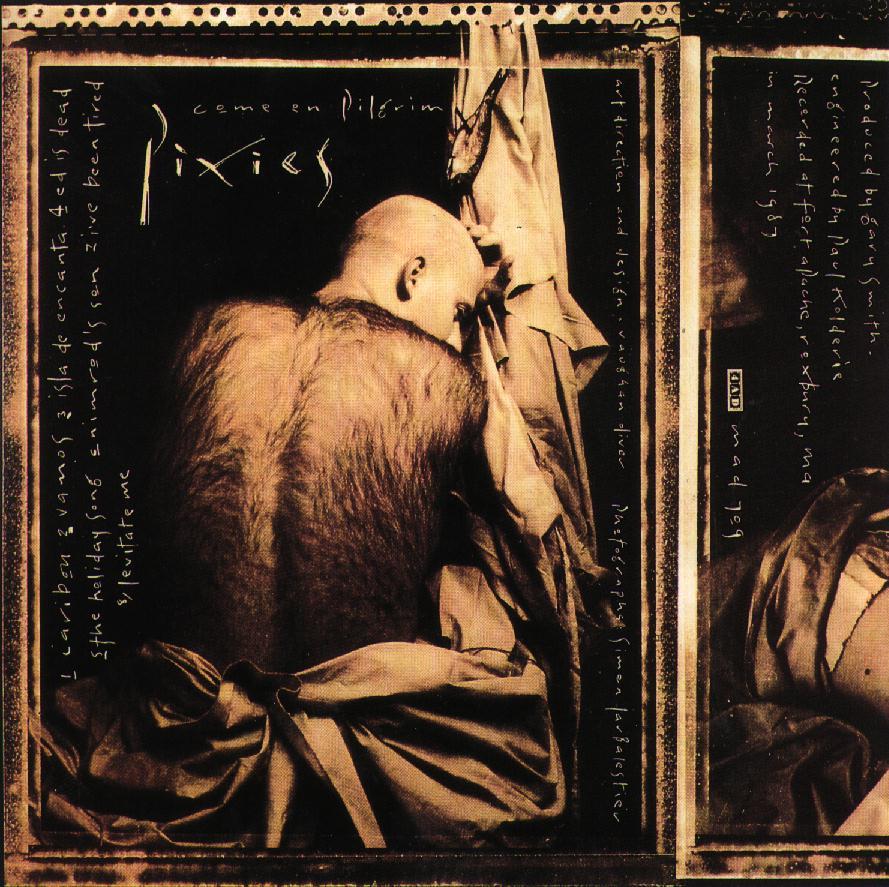 Caribou – The EP starts out with this song with rather abstract lyrics about a caribou hunt, with a hint of reincarnation as well.

Vamos – The refrain from this song likely derives from the 1983 song “Vamos a la Playa” by Righeira, which is actually about a nuclear bomb exploding. The Pixies’ expanded version of that phrase, which means “let’s go to the beach,” is “vamos a jugar por la playa,” or “let’s go play on the beach.” And the lines, “Your daddy’s rich, your mama’s a pretty thing” refer to the Gershwin song “Summertime.” The main distinguishing feature of this one, however, is its weird guitar solo.

Isla de Encanta – Before starting the Pixies, Black Francis studied in Puerto Rico for a while, which influenced a lot of his early songs. The island is nicknamed “la Isla del Encanto,” or “the island of enchantment,” which is printed on their license plates. The title is basically just bad Spanish for the nickname. I don’t know Spanish, but from what I’ve heard, it’s usually pretty awful in Pixies songs. Musically, this one is very high-energy.

Ed Is Dead – Black Francis has said this slower but still loud song is about a mentally impaired girl who would ride a bike with a transistor radio attached to the handlebars. I’m not sure if the girl’s name is Ed, or that’s somebody else.

Nimrod’s Son – I mentioned this song in my post about the Biblical Nimrod, after whom the song is titled. The story seems to take more from Oedipus than from Nimrod, although there were tales about Nimrod’s mother being his wife as well, or that was reincarnated as his own son.

I’ve Been Tired – There’s something about the rhythm of this one that sounds kind of ska-like, not that I really know from ska. It’s about a weird conversation between the narrator and his sexual partner, and an early example of the chorus being noticeably louder and noisier than the verses. Some of the lyrics make reference to the Song of Solomon, known for its somewhat strange romantic imagery. If someone’s breasts are really like a cluster of grapes, it’s probably time to get a mammogram.

Levitate Me – There’s an urgency to this one that I enjoy, as well as some falsetto and breathy vocals from Black Francis. The line “Come on, pilgrim, you know he loves you” comes from a song by Christian rocker Larry Norman, who wrote the song “Six Sixty-Six” that the Catholics would later cover.

Now, on to Surfer Rosa. There are CDs that include both, but this was not the case with the ones I bought.

Bone Machine – There’s a good build-up at the beginning, with the drums, bass, and guitar each coming in one at a time. The title refers to the female pelvis, and the lyrics touch on molestation by priests before that became a major scandal.

Break My Body – Quite a few titles on this album are pretty similar, aren’t they? I like this one, but there isn’t all that much to distinguish it.

Something Against You – A surf-style guitar intro leads into a vocal filtered through a guitar, making it rather distorted. From what I’ve seen, the lyrics are mostly just “I’ve got something against you” repeated, followed by “Oh yeah, I am one happy prick” at the end. So it’s another sex song.

Broken Face – I like the goofy way Frank sings at the beginning. The song itself covers incest again, as well as some other rather grotesque images.

Gigantic – Kim Deal takes the lead vocal on this one, although I think Frank came up with the title and chord progression. He said he thought the progression sounded big, hence the name. The song itself seems to be about a white woman having an affair with a black man.

River Euphrates – The refrain here is a little hard to understand, but I believe it’s “Ride a tire down River Euphrates.” It kind of sounds like “Tigris,” a river often mentioned in conjunction with the Euphrates, but it’s unlikely. Frank has referred to the bit at the end as a fake Jesus and Mary Chain song.

Where Is My Mind? – Probably one of the better-known Pixies songs, thanks partially but not entirely to its appearing near the end of the movie Fight Club. It has a kind of airy, dreamlike sound, particularly with the “ooooh” backing vocals. The lyrics refer to the time Frank was snorkeling in the Caribbean, and one fish wouldn’t get out of his way.

Cactus – The narrative is told from the point of view of a guy in prison who wants his girlfriend to send her a dress stained with her food, sweat, and blood.

Tony’s Theme – A fun song with an amusing spoken-word introduction by Kim. I believe Frank has said this is about one of his roommates in Puerto Rico.

Oh My Golly! – Another bad Spanish lyric, this time about sex with a surfer. It provides the title for the album, although it’s not entirely clear whether the surfer is named Rosa, or is just being referred to as “pink surfer.”

Vamos – I’ve written about this song already, and while this is a distinctly different recording, I don’t really have anything else to say about it. I will comment on how the numbering for this part of the album is sometimes messed up due to its being preceded by a clip of Black Francis saying, “You fuckin’ die!” and then explaining why. This is actually its own track, at least on the CD I have.

I’m Amazed – Following a bit of Kim telling a story about a sex scandal that presumably happened at her school, we get a chaotic and distorted song that I’m not sure is about anything in particular. Steve Albini, the album’s producer, decided to edit out a bridge with the lyrics, “All broke hearts, we’ll all mend.”

Brick Is Red – Another one with lyrics that were cut from its earliest versions, in this case including the title of the song. It originally started with, “Brick is red, and Hitler’s dead.” Hey, that’s a positive thought, isn’t it? Instead, there’s a long instrumental introduction to a quite short song. Frank and Kim do some nice, somewhat atypical harmonizing.