All the Wrong Questions, by Lemony Snicket – Daniel Handler brings back his famous character and alter-ego for a series in which he’s not just the narrator, but the protagonist as well. The series is a prequel to A Series of Unfortunate Events, featuring a young Snicket in his early days at V.F.D. I read all four books back-to-back, and they are really all one story, unlike how each new Unfortunate Events book had its own plot and setting. 13 Suspicious Incidents is a spin-off made up of thirteen self-contained memories utilizing the same setting and characters. There are, by the way, SPOILERS for both series, so proceed with caution.

The young Lemony Snicket accepts an apprenticeship with S. Theodora Markson, who was ranked the worst chaperone in the organization. The two of them visit Stain’d-by-the-Sea, a dying town formerly known for its ink industry. As with the other Snicket series, children tend to be quite resourceful (there are even young twins who drive a cab while their father is otherwise occupied), while adults are largely oblivious when not outright evil. A crafty villain called Hangfire, who can imitate anyone’s voice and has a knack for framing others for his crimes, is seeking the statue of the Bombinating Beast so he can control the real thing. Strongly hinted to be the same as the question-marked-shape Great Unknown from the later ASOUF books, the Beast is a giant Lovecraftian creature that isn’t evil so much as amoral and incredibly hungry. It’s named after the sound it makes, much like the Beste Glatisant in Arthurian legend.

The whole thing is presented as a mystery story, complete with a femme fatale, although since she’s a kid the sexual aspects of this type are downplayed. It didn’t feel quite as original as the earlier series, but it does contain a lot of the running gags, facetious definitions, and literary references for which Snicket is known. While the main characters, aside from Snicket and his sister Kit, are all new, a few familiar faces drop in or are mentioned in dialogue. Bertrand Baudelaire, father of the main characters in ASOUE, was Markson’s earlier apprentice, whom she much preferred to Snicket. Hector, Captain Widdershins, and Josephine (later Anwhistle) are confirmed to have been Snicket’s associates. Count Olaf is mentioned twice, once in graffiti at a private school for nobles saying he loves “You-Know-Who.” I wonder if that’s referring to Kit or someone else.

Aside from the likely reveal of the Great Unknown, the books don’t answer any of the lingering questions from the original series. Then again, Snicket would probably tell us we’re asking the wrong questions. I hadn’t really thought about ASOUE recently, but I did want to address the Snicket family tree from The Unauthorized Autobiography of Lemony Snicket. 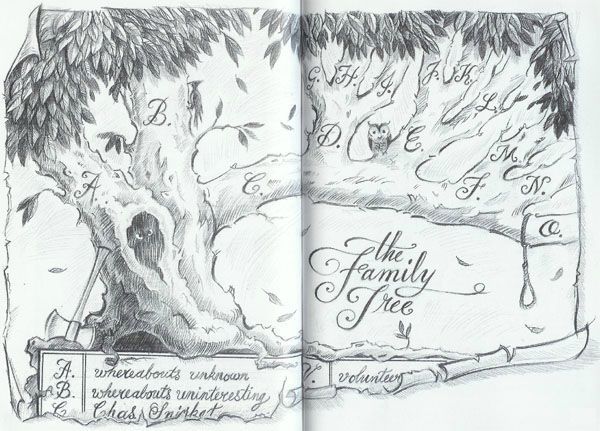 This page offers some speculation. I’m pretty sure the nurse on the branch identified as O was supposed to bring to mind Count Olaf, but in that case wouldn’t he have been in a relationship with his first cousin (i.e., Kit Snicket)? Then again, if he really is a count, that kind of thing isn’t uncommon among the nobility. I have considered that the Man with a Beard But No Hair and the Woman with Hair But No Beard, said to be so villainous that Olaf is terrified of them, might be his older siblings M and N, but the books neither confirm nor deny this.

Like Loading...
This entry was posted in Authors, Book Reviews, Monsters, Uncategorized and tagged a series of unfortunate events, all the wrong questions, bombinating beast, count olaf, lemony snicket, shouldn't you be in school?, the unauthorized autobiography of lemony snicket, when did you see her last?, who could that be at this hour?, why is this night different from all other nights?. Bookmark the permalink.