I’ll Bossanova with Ya 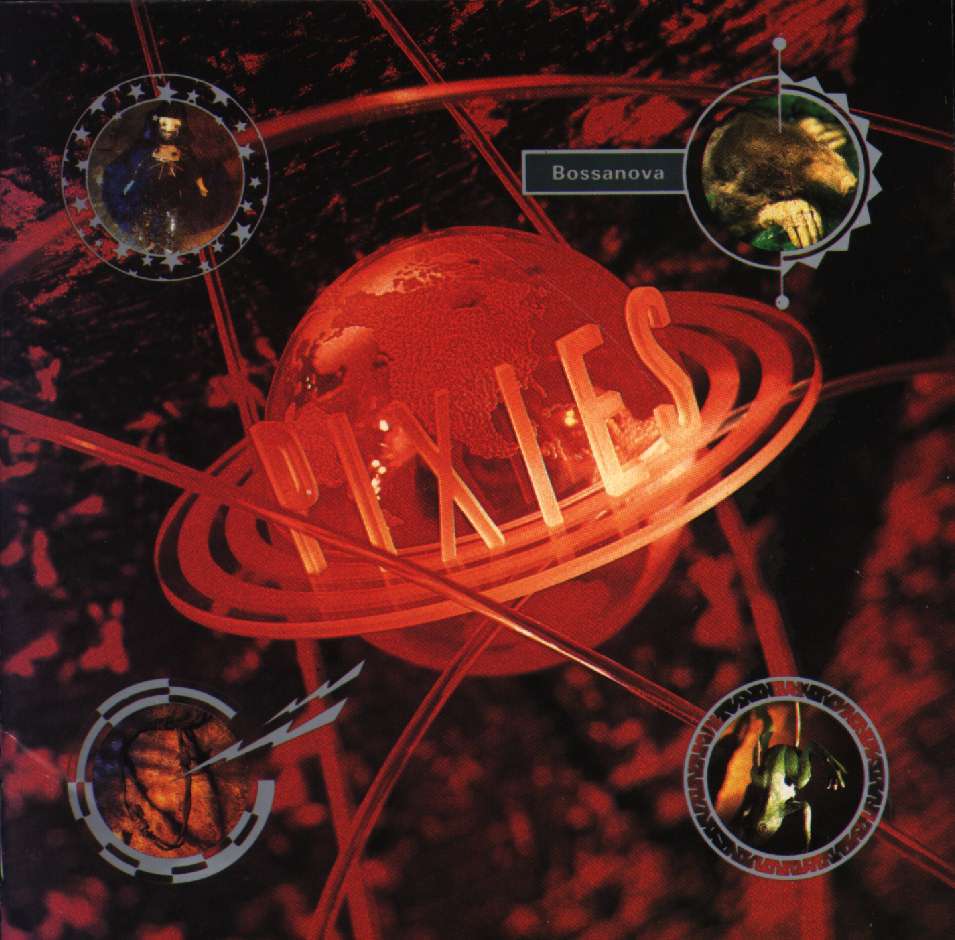 Pixies, Bossanova – This is my favorite Pixies album, which I know isn’t a very common opinion. Well, at least it isn’t from the music critics, who prefer the more raw, proto-grunge sound of the earlier records. While there’s some of that here, most of it has more of a spacey feel, showing tendencies that Frank would play up in his early solo work. This is reflected by the planet on the cover, sort of a bizarre version of Earth that’s red and has rings. I once saw this art in a book of the greatest album covers that I was paging through at a bookstore.

Cecilia Ann – The Pixies have a clear affinity for surf music, and this album starts with a cover of an instrumental by the Surftones, with the Pixies’ version not surprisingly being louder and noisier.

The sound at the beginning is a sample of the Surftones’ rhythm guitarist and engineer Steve Hoffman kicking his amplifier. The song was written by Hoffman and Charles “Frosty” Horton, but is clearly inspired by the classical piece “La Sicilienne,” which would later become the basis for Frank’s “The End of the Summer.”

Rock Music – Like “Something Against You,” it’s a song with distorted vocals. Most of them are “your mouth’s a while away” repeated over and over, but apparently “encantuse” was a bit of Spanglish slang that Frank learned growing up. He thinks it means roughly “don’t mess with me.”

Velouria – My favorite Pixies song, and a strong contender for my favorite song by anybody. It just sounds so amazing, with help from a theremin to give it a science fiction sound. The theme is the same as on “Velvety,” about Lemurians settling under Mount Shasta, but here the lyrics are more abstract. I think the line “we will wade in the shine of the ever” is quite evocative. I understand the title was inspired by the Kinks’ “Victoria,” and also sort of rhymes with “Lemuria.”

The video seems to be another avant-garde, screw-you kind of thing, simply showing the band running over a rocky landscape played in slow motion, with nothing really to do with the music.

Allison – Frank has said he originally intended this to be about a girl named Allison, but since Elvis Costello already had a song like that, he instead made it about jazz pianist Mose Allison. The Fastbacks did a fairly straight cover of this one.

Is She Weird – One of the less melodic numbers on this album, it’s a tribute to pale-skinned goth girls, a subject Frank turns to every now and then. I like the way he enunciates certain words.

Ana – Frank’s first known foray into acrostics, with the first letters of each line spelling out “surfer.” He apparently had acrostics mixed up with anagrams, hence the title. He’d return to this same idea with “Speedy Marie,” “Valley of Our Hope,” and “Robert Onion.”

All Over the World – I think this is the longest song the Pixies had recorded up to that point, although at about five and a half minutes, it’s not really THAT long. The lyrics are largely stream-of-consciousness, but they’re quite interesting. It’s pretty reminiscent of “Velouria,” really. The lines “When one side is hot, the other side of the moon is not” seems like a callback to “Brick Is Red: “A white moon’s hot, the other side’s not.” The occasional guitar breaks and distorted spoken bits help to make it feel more epic and varied.

Dig for Fire – Frank has been known to channel David Byrne in his vocals and arrangements, and this is pretty much a straight-up Talking Heads pastiche. The lyrics don’t mean anything in particular, but I’m intrigued by the idea of someone who spent so much time sleeping he can stay awake for the rest of his life. Obviously it doesn’t really work that way, but from my rather unusual point of reference, it makes me think of the Gapers from The Silver Princess in Oz, who hibernate half the year and spend the rest eating. The song is a favorite of mine, because why wouldn’t I like the combination of Pixies and Talking Heads? For some reason, the official music video is for both this AND “Allison,” despite the fact that the visuals for each song are quite different.

Down to the Well – Presumably a love/sex song, although I don’t know if it’s ever really been discussed in detail. It took a while for this to appear on an official record, as it was on the demo tape with stuff from the first album. The demo version makes Kim Deal’s backing vocals more prominent.

The Happening – Inspired by a Las Vegas radio show called The Billy Goodman Happening, in which the host would discuss aliens and UFOs with callers. Sort of like a localized Art Bell, I guess. The song tells the story of aliens landing in Vegas and being interviewed by Goodman, referred to as “some good man whose name was Bill” in much the same style Jonathan Richman is name-checked in “The Man Who Was Too Loud.” The final part of the song is in sonnet form.

Blown Away – An abstract love song that isn’t to anyone or anything in particular. Frank has cited Neil Young as an influence on it.

Hang Wire – Frank has said this was inspired by the Rolling Stones’ song “Hang Fire,” and how he liked the sound of the titular phrase. “Hang fire” is a term that comes from a delayed action between pulling the trigger of a gun and the propellant being launched, which in the song refers to biding time instead of working.

Some of the lines from the Pixies song are in haiku form, at least as far as the syllable structure goes.

Stormy Weather – This song only has six lyrics repeated over and over, unless you count “oh-oh” as lyrics. It can get a little tedious, but the changing music and urgency of the vocals make it worthwhile. I believe Frank or someone described it as “a sing-along for the whole world.”

Havalina – The sort of folky closing song is about encountering a wild pig in Sedona, Arizona. The actual Spanish for “pig” is javelina, so it’s another example of the butchered Spanish for which the Pixies are known. They Might Be Giants did a cover of this for a Pixies tribute album, and it appears on their odds-and-ends collection Album Raises New and Troubling Questions. Their version is pretty straight, but adds some accordion to the mix.