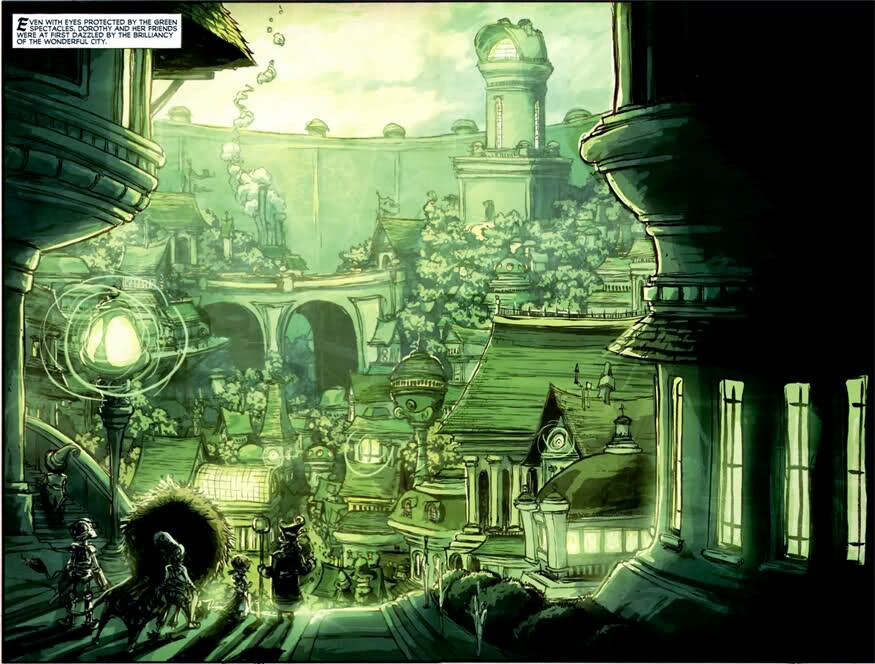 In a post I wrote over three years ago, I mentioned a rough map of the Emerald City by Robert Pattrick and Judy Pike that had appeared in The Baum Bugle. Hungry Tiger Press recently scanned and posted this map as part of their excellent Map of Oz Monday series.

It’s based largely on John R. Neill’s books, simply because he’s the author who provided the most detail about the city outside the palace. L. Frank Baum and Ruth Plumly Thompson tended to point out how beautiful it was and how happy the inhabitants were, but didn’t say a lot about its layout or buildings. 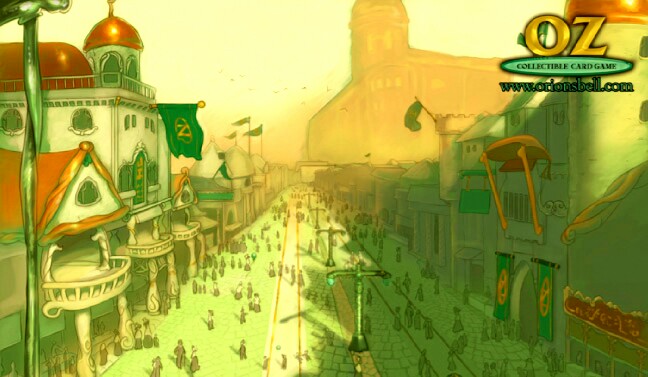 On the first visit to the city in The Wonderful Wizard of Oz, we’re told: “The streets were lined with beautiful houses all built of green marble and studded everywhere with sparkling emeralds. They walked over a pavement of the same green marble, and where the blocks were joined together were rows of emeralds, set closely, and glittering in the brightness of the sun.” We later learn that the city only appears green through the glasses everyone is made to wear, but in the next book several characters enter without spectacles and still presumably see it the same way. Shops in the streets sell popcorn, candy, lemonade, and clothing; and shopping carts are in common usage. Oddly, we don’t see any mention of the carts in later books. In Emerald City, the place “has nine thousand, six hundred and fifty-four buildings, in which lived fifty-seven thousand three hundred and eighteen people, up to the time my story opens.” Thompson gives the same population figure in Gnome King, but doesn’t indicate how many buildings there are. With all these buildings, however, these first two Royal Historians don’t tell us much about them. The prison in Patchwork Girl is “built just beside the great city wall, but in a quiet, retired place,” and accessed by way of a side street. In Lost King, Pastoria sets up a tailor shop “next to the palace.” This doesn’t count places outside the city wall, an area that I’m planning to cover in a future post. With that subject in mind, however, Ojo has Unc Nunkie walking from his house just outside the wall through a door leading right to Ozma’s palace gardens, which seems unlikely. I think Thompson sometimes forgot the city has TWO walls, one around the whole thing and another around the palace grounds. The various issues of the Ozmapolitan add a few other possible urban locations: the Ozmapolitan Building (which would play a major role in Dick Martin’s Ozmapolitan), the post office, Emerald City Hotel, Wizard Park, a spectacle repair shop in Emerald Square, the Tik-Tok Building, Jack Pumpkinhead’s 24T Lunch Room, an opera house (later appearing in Eric Shanower’s short story “The Balloon-Girl of Oz”), and the M.T. Dome Building in Scarecrow Row. There’s also an indication in the 1904 edition that the city limits are being expanded, which strikes me as difficult when it’s arranged in a symmetrical pattern with a wall around it.

Neill’s Emerald City is bizarre in many ways, but the Imperial Illustrator turned Royal Historian appears to have had a pretty clear picture of what much of the city looked like. For some reason, he named the city streets and some other locations after food. The Wizard of Oz must have forced someone to do the naming before he was allowed to take his lunch break. Jenny Jump’s Style Shop is located at Strawberry Street and Banana Boulevard, the busiest intersection in town. According to a picture Neill drew, right beyond the house next door is an elephant-shaped fountain, even though the Elephant Fountain is said elsewhere to be located in Pancake Park. Pattrick and Pike suggested that this could be one of the public soda fountains. There’s a bakery across the street, and the Great Crystal Banquet Hall is on the other side of Banana Boulevard. Oddly, the very first mention of Strawberry Street and Banana Boulevard on p. 35 of Wonder City suggests that the two of them don’t intersect, but this was likely added in by a rather sloppy editor. On pp. 70-71, Jenny and Number Nine cross Pudding Place, Celery Street, and Doughnut Drive before getting to the future Style Shop. Number Nine’s uncle, a retired emerald cutter, lives on Pudding Place. Pike also supposes that the building in the upper left-hand corner of Neill’s drawing of the city could be the Public Library of Oz with its Ivory Tower. On p. 294 of Scalawagons, we’re told that Strawberry and Celery Streets are shortcuts to Custard Court, which doesn’t really fit with Pike’s map. It sounds like the Court is a public square rather than a full street. Number Nine visits an Oz cream shop on Pumpkin Place near the intersection with Banana Boulevard on p. 284 of Lucky Bucky. There are brief mentions of Apple Alley on p. 279 of Scalawagons and Lemon Lane on p. 243 of Lucky Bucky.

Several other sources mention streets in the city, sometimes fitting with Neill’s naming scheme and other times not. One Ozmapolitan mentions a shop in Emerald Square facing Scarecrow Court, possibly also where Scarecrow Row is located. Another issue, which came out after the Neill books, refers to a jewelry shop at the corner of Rigmarole and Gem Streets. Phyllis Ann Karr’s “The Computer Wizard Makes a Comeback” has Omby Amby and Corwin Davidson Poe crossing the junction of Taffy Street and Ribboncandy Road, although admittedly this is in the future. March Laumer’s Vegetable Man has a Munchkin Avenue and a Thumbumbia Lane. In Lin Carter’s Tired Tailor, Pastoria and Snip first walk from the tailor shop to the palace along Banana Boulevard and Strawberry Street, but later take Applesauce Avenue to the same place. Dorothy encounters the Polit Burro at the corner of Blueberry and Vine in Greg Gick’s Bungle and the Magic Lantern. And in Marin Elizabeth Xiques’ Sweet Wishes, Wintergreen the Elf opens a candy shop on Scarborough Street, and the Boroughs live on Beryl Lane. So perhaps not all the streets have food-related names, although I’m not sure where these others would be located relative to the ones we know from Neill.