Walking in a Winkie Wonderland 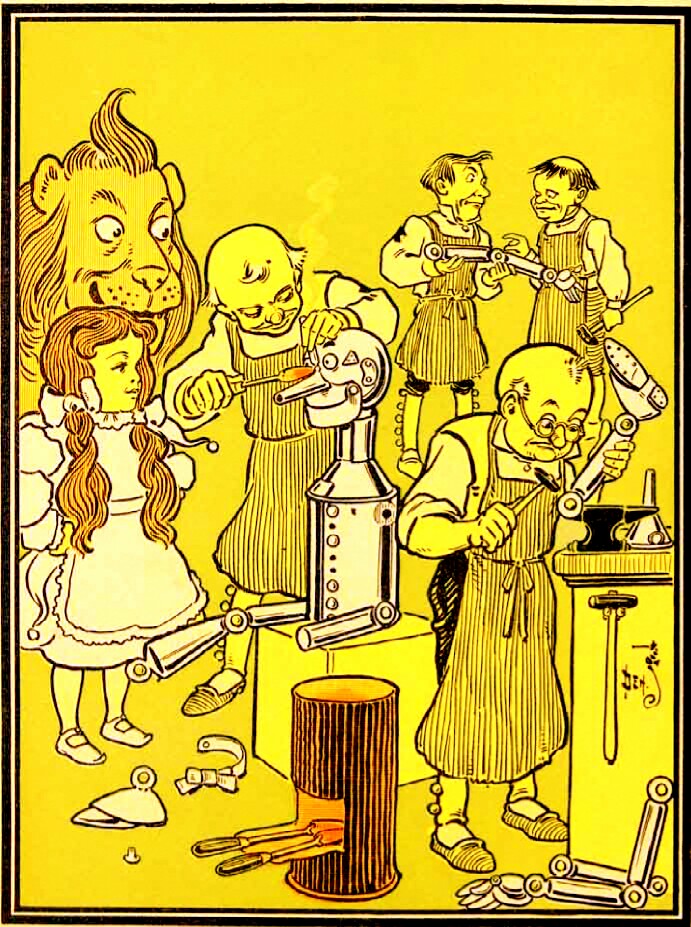 The geography of Oz is pretty complicated, with new communities often seeming to appear out of nowhere. You’d think it would have been thoroughly explored by now, but apparently not. L. Frank Baum did make a map of the nation, however, and his successors used his basic model to locate their own new places. It does seem that, after making the map, Baum had a fairly complete view of the general layout of the land, while other authors didn’t always stick with this. In The Tin Woodman of Oz, he refers to “places in the mountains of the Gillikin Country, and the forests of the Quadling Country, and perhaps in far-away parts of the Munchkin and Winkie Countries, where the inhabitants were somewhat rude and uncivilized and had not yet come under the spell of Ozma’s wise and kindly rule.” And in Lost Princess, he gives a general overview of the Winkie Country: “At the east, which part lies nearest the Emerald City, there are beautiful farmhouses and roads, but as you travel west you first come to a branch of the Winkie River, beyond which there is a rough country where few people live, and some of these are quite unknown to the rest of the world. After passing through this rude section of territory, which no one ever visits, you would come to still another branch of the Winkie River, after crossing which you would find another well-settled part of the Winkie Country, extending westward quite to the Deadly Desert that surrounds all the Land of Oz and separates that favored fairyland from the more common outside world. The Winkies who live in this west section have many tin mines.”

A shepherd who lives on the eastern edge of the “rough country,” next to the Rolling Prairie, confirms, “It is between here and the west branch of the Winkie River that all dangers lie, for that is the unknown territory that is inhabited by terrible, lawless people.”

Actually, most of the people the searchers find in this area are friendly, but very isolated. Thi and Herku are both cities surrounded by walls, although it’s an illusory wall in the former case.

The map in this book identifies the area north of this and south of the west branch of the Winkie River as “Unknown Land,” while to the south is the desert where the Tottenhots live. Exactly how far south the unexplored territory extends isn’t clear. Also, there’s no indication that Dorothy and her friends crossed any of these unknown lands while walking from the Truth Pond to the Tin Castle in Road.

The Oz Club map places Gloma’s Black Forest within the Unknown Land, but nothing else. Ruth Plumly Thompson’s own map, on the other hand, places several locations there: Pokes and Fix City from Royal Book, the Maybe and Monday Mountains and the town of Play from Grampa, and Patch and Suds from Gnome King. Assuming James E. Haff had access to Thompson’s own maps, there’s the question as to why he moved these places. For Patch, this makes sense, as both Potaroo and Kuma Party both state that it’s “just below the Kingdom of Ann of Oogaboo,” while Thompson’s map places it quite far south of Oogaboo. Also, unlike the places visited Lost Princess, Patch has an economy that relies on trade with other countries.

On the other hand, Pokes and Fix City ARE places in the middle of nowhere with residents who never leave. A look at the plot of Royal Book shows that the Cowardly Lion ended up in the forest where Pokes is located after leaving the Scarecrow’s mansion and running aimlessly in a thunderstorm that darkens the sky. We don’t know exactly how long this takes, although Dorothy thinks it seems like “hours and hours.” It’s unlikely that they would have crossed a river during this mad flight, but the location on the Club map seems rather far out for them to have gotten there without hitting something else first. It’s also strange that it would have taken them three days to reach the Deadly Desert from the river five miles outside Fix City, but admittedly they really don’t know where they’re going. I don’t know why they couldn’t just follow the sun, but maybe it was overcast, especially after the storm.

I believe Haff said he found Grampa particularly hard to map. When Toto chases a baconfly, it leads to Dorothy making a wrong turn on the way from the Tin Castle to the Scarecrow’s place. She then runs into Percy Vere, who has fallen down the mountain from Perhaps City and wandered the countryside all morning.

A runaway road takes the three of them to a forest, and heading west according to the text (which would presumably actually be east, due to the reversed directions throughout the book) brings them to Monday Mountain.

After escaping, they meet up with Grampa and company and try to head for the Emerald City, but presumably aren’t actually sure which way it is. They reach Play, Urtha runs off to Perhaps City without knowing where she’s going, and the others follow her trail of flowers. I suspect Haff relocated these places because Dorothy would surely have known if she’d crossed a river after leaving the Tin Castle. The Club map has the Maybe Mountains and Monday Mountain so close to Nick Chopper’s home that it’s kind of strange Dorothy hadn’t explored them before, but they are somewhat off the beaten path.

It’s possible that John R. Neill was thinking of the area between the rivers when writing in Lucky Bucky of how the painted image of Mombi visits “the wastelands of the Winkie Wilderness” where sorcerers and witches live “in the lonely mountain passes.” Davy Jones later takes a river through a land of outlaw magicians, labeled as “Dangerous Passage” in his diagram of the journey.

Haff places this to the north so that he can match up Slippery Dick’s Land with Suds, although of course Thompson placed Suds between the rivers in the first place. It’s also not clear whether there’s only one wilderness area where evil magicians lurk, or even if there is how far it extends. And this is during the period when the Wizard of Oz had the rivers in the central part of Oz removed, making it even more difficult to tell. Regardless, even on the most recent Club map, there are significant parts of the Winkie Country that still haven’t been fully explored. Or if they have, those stories haven’t become available to us yet. Wizard states that there is no road between the Emerald City and the Wicked Witch of the West’s castle, but Road and Emerald City do have one that runs from the capital to the Tin Castle, passing the homes of the Scarecrow (well, once it’s built, that is) and Jack Pumpkinhead. The Club map also shows a road from the Emerald City that reaches almost but not quite to Oogaboo, presumably the Yellow Brick Road that Scraps and her companions take to the city in Gnome King.

2 Responses to Walking in a Winkie Wonderland