See You in the Funny Pages 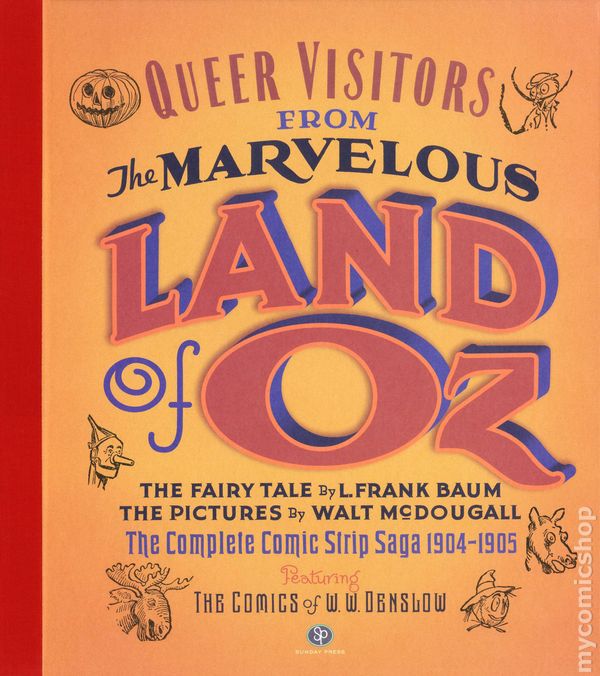 Queer Visitors from the Marvelous Land of Oz: The Complete Comic Strip Saga 1904-1905, published by Sunday Press – I received this oversize collector’s item as a Christmas gift, which is good as I’m not sure I would have bought it for myself, but I did want it. It contains full-color reproductions of the Queer Visitors comic page by L. Frank Baum and Walt McDougall, as well as W.W. Denslow’s competing Scarecrow and Tin-Man comic. These weren’t comic strips, but short stories with accompanying comic illustrations.

While the text of the Visitors comics was collected in a volume from Hungry Tiger Press, the original art was difficult to present, as it took up an entire newspaper page each time.

McDougall’s depictions of the characters are clearly based on John R. Neill’s, although his Wogglebug has six limbs. The pictures often contain word balloons with additional jokes and observations, one running gag being that the Gump always wants to go back home, fitting his character as portrayed in The Marvelous Land of Oz. Sometimes the illustrations are the only way to figure out the Wogglebug’s answers that appear at the ends of the early stories.

Denslow’s comic has the same basic idea of bringing some of the established characters to America, where they visit New York City, Bermuda, New Orleans, and California. These stories are more sequential than Baum’s, each new mishap that the Ozites find themselves in often building from the last one. Both comics include some offensive stereotypes in both text and art, but for the most part they’re still fun, if rather slight. Also included are a few other comics by the same artists, including some of Denslow’s earliest Billy Bounce pages.

While Baum’s cast uses the reassembled Gump to get out of Oz, Denslow has a magical chestnut salesman named John Burr enchant a cart to take them “over the edge of Fairyland” and down into Manhattan. His first two stories, “Dorothy’s Christmas Tree” and “Scarecrow and Tin-Man on Skates” take place in Oz, the first presumably during the course of The Wonderful Wizard of Oz when Dorothy is still making her first visit to the land.

The Royal Timeline of Oz places it in the period after the death of the Wicked Witch of the West when Dorothy and her friends are waiting for a response from the Wizard, meaning that the book as a whole would have to take place from November through early January. The Scarecrow, Tin Woodman, and Cowardly Lion visit a grove in an enchanted forest where fully-decorated Christmas trees grow around a crystal lodge. I wonder if this could be the area where Santa Claus later establishes Christmas Valley in Robin Hess’s Christmas in Oz. This would mean disregarding the unlikely statement that the Lion drew a sleigh over 1000 miles to reach the forest. “Skates” mentions a “wonderful blacksmith who had once fixed up the Tinman,” but it’s not clear whether this is Ku-Klip or one of the Winkie smiths in the Wicked Witch’s old castle. A few references in the comic are specific to the stage play of Wizard, and “Scarecrow and the Tin-Man About Town” and its follow-up “Scarecrow and the Tin-Man Recaptured” are about the friends taking a break from the theater. Considering their naivete and the fact that the Tin Woodman rusts in a fountain, these are presumably the actual characters rather than the actors playing them, which confuses things quite a bit.

4 Responses to See You in the Funny Pages