Don’t Say Nothing Bad About My Baby New Year

Rudolph’s Shiny New Year – This 1976 Rankin-Bass special is currently up on YouTube, although I can’t say whether it will stay there.

I can’t recall having seen this one before, although Beth had. The most famous reindeer of all is charged by Father Time with finding the missing Baby New Year, and he makes several new friends on his quest. The characters are quite entertainingly whimsical, and it looks like they were a lot of fun to design. Really, though, for a fifty-minute special, I think it might introduce a few too many new characters. Rudolph is assisted by three characters with clocks built into their bodies: General Ticker, the camel Quarter-Past-Five, and the whale Big Ben. 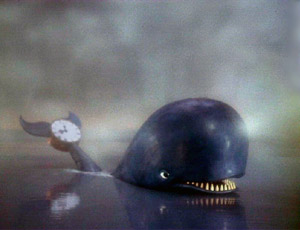 While the latter plays a significant role, the other two disappear pretty quickly. The reindeer goes to search the Archipelago of Last Years, each of which is inhabited by the personification of a previous year, and permanently frozen in that year. I wonder if this was at all influential on Clive Barker’s Abarat. This brings in three new characters who accompany the reindeer. One Million BC (O.M. for short) is a caveman who lives on an island inhabited by dinosaurs, because screw scientific accuracy. Sir 1023 is a knight whose island is the home to fairy tale and nursery rhyme characters. And 1776 is a Ben Franklin lookalike on an island that perpetually celebrates Independence Day. Yeah, it’s really quite America-centric; there are also brief mentions of Christopher Columbus and the Panic of 1893, and the magic diamond at Father Time’s palace is clearly based on the ball in Times Square. I’m not sure why Rudolph deems 1965 “too noisy.” Because of rock music? The Vietnam War? 1965 being a past year also raises questions about the timeline, as the beginning implies this starts immediately after the end of the original Rudolph the Red-Nosed Reindeer special, released in 1964 (although a mistake at the beginning gives the copyright date as 1164). It’s later said that the new year that’s beginning is “19-Wonderful.” There are some pretty accomplished voice actors involved here. Red Skelton narrates as Father Time, Frank Gorshin (the Riddler in the Adam West Batman) voices Quarter-Past-Five and Sir 1023, Paul Frees (a regular in the Rankin-Bass cartoons, as well as the voice of Ludwig von Drake and Boris Badenov) does a whole bunch of voices, and Big Ben is Harold Peary (the Great Gildersleeve of radio fame).

While charming in many respects, I have to question the moral of this special. It’s said that Baby New Year (who, by the way, was apparently born some time BEFORE New Year’s Day) runs away because people laugh at his big ears. Hey, I can relate; I’ve been told people criticized my ears when I was first born. After chasing the baby from one island to another, Rudolph convinces him that the people laughing at him aren’t trying to be mean, and he’s actually making them happy. Except, as Rudolph should realize, it really IS mean to laugh at someone for something they can’t help. The apparent moral of the original Rudolph, as with Dumbo, is that it’s okay to be different as long as you have a useful skill to go with that difference, but at least in those we’re clearly not supposed to be on the side of the mocking reindeer or elephants. Here, I guess we’re meant to think that a baby who’s sensitive about being laughed at should just put up and shut up. I also feel the villain’s defeat was a little too convenient. The vulture Aeon the Terrible, who can live for an aeon (sometimes said to be a billion years, although there’s no specific standard definition) and then turns into ice and snow, captures Baby New Year to stop the progression of time and hence stay alive. 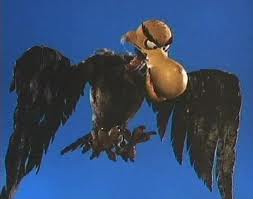 While kidnapping isn’t cool, I can certainly sympathize with him, as he’s on his deathbed. Anyway, Aeon bursts out laughing when he sees the baby’s ears, and is deemed too full of warmth and happiness to turn into ice and snow. So what, he’s immortal now? Or is he now going to die gradually and gracefully? Also, he’s full of warmth because he laughs at someone different? I also had to wonder why Rudolph didn’t fly on some occasions when it would have been useful, but maybe he’s somewhat limited in this ability. After all, while pulling Santa’s sleigh he’s accompanied by eight other reindeer.

Aside from the time of year being appropriate, one reason I was inspired to watch this was that I recently saw a review of the follow-up, Rudolph and Frosty’s Christmas in July, by model and cosplayer Cheyenne Wise.

I remember seeing part of that one as a kid, and the review made clear that it was even more bizarre than I recalled. I might have to watch that one again at some point. It makes reference to most of the earlier Rankin-Bass holiday specials, and Big Ben puts in an appearance.