In the Company of Comics

Beth recently asked me why I’ve only recently started reading comics, and I guess it has something to do with enjoying the recent Marvel films. Yeah, I’m sort of jumping on the bandwagon, but there can be advantages to that. After all, that’s when there tend to be more sales and promotions. Here are a few titles I’ve been reading recently:

Princeless – I’ve written before about how much I enjoyed the first two volumes of this series. Volumes 3 and 4 have Princess Adrienne and her sidekick Bedelia continuing on their quest, first by rescuing the Pirate Princess Raven, a more traditional tough warrior woman than the tomboyish Adrienne. The two of them go on a swashbuckling adventure before parting ways, with Raven’s crush on the Princess remaining unrequited. Adrienne and Bedelia then brave a swamp full of goblins and zombies to find the middle Ashe sister Angoisse, who is in love with a scheming vampire. Meanwhile, Adrienne’s brother Devin goes off in search of his mother, accompanied by a werewolf girl. As with the preceding volumes, the cast is diverse, and features strong women battling against a patriarchal fantasy society. 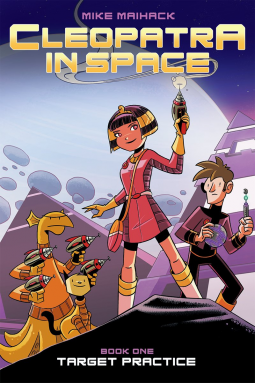 Cleopatra in Space – A young adult series by Mike Maihack in which a young Cleopatra travels to the future, in which she’s hailed as the one who can save the galaxy from the evil Xaius Octavian. She becomes quite popular in her military academy, which is led by a sentient cat descended from her own pet in Roman times. I wonder if there’s a sub-genre for space-faring civilizations based on historical periods from Earth. I guess that kind of thing happened pretty often on Star Trek. I checked out the first two volumes from the library, and they’re quick reads, pretty light on dialogue. I’d still say they’re worth a read, though. Maihack continues the trend of making Cleopatra look like Nefertiti even though she was actually of Greek descent, but that doesn’t really bother me. She’s a cute young action heroine.

Inhumans – I read a graphic novel collection that introduced the characters, as well as some newer stories. It was a little difficult to keep up on the plot developments. Their hometown of Attilan has been locating in the Atlantic Ocean, the Himalayas, the Moon, and the Hudson River. The descendants of humans who received superpowers due to experimentation by the Kree millions of years earlier, they’re led by Medusa, whose powers are in her hair; and her husband Black Bolt, who can cause great destruction simply by speaking. I do think it’s a little weird that a few of them (Medusa, Gorgon, and Triton, at least) have names derived from Greek mythology when actual mythological characters also exist in the Marvel Universe. And what does stomping the ground really hard have to do with the Greek Gorgons, anyway? While the characters do become involved in the typical superheroics, there’s also the continuing theme of how an advanced ancient civilization interacts with the modern world. And I quite like Lockjaw, the teleporting dog.

I understand that an Inhumans film is scheduled for release in 2019.

Thor – I’ve been reading the few Thor books the library system has, and also obtained digital editions of the 2015 story arc in which Jane Foster gains the powers of Thor.

She also takes the NAME Thor, which is kind of weird, although it really does just mean “thunder.” Besides, Thor has been an alter-ego for Donald Blake and Eric Masterson, so his identity has always been a bit confusing. Jane is suffering from cancer, and while it doesn’t affect her while in Thor form, it’s exacerbated when she reverts to her human self. She finds herself fighting against an alliance between the Dark Elf Malekith, the Frost Giants, and the megalomaniac in charge of Roxxon Oil.

Dirk Gently’s Holistic Detective Agency – Chris Ryall and Tony Akins bring Douglas Adams’ character to comics for a new caper in San Diego involving ancient Egyptians coming back to life and homeless people receiving cell phones that run on life energy. The writing isn’t much like Adams’, but it’s pretty true to the character and his world. There are several references to the original novels, including appearances by Kate Schechter and Reg Chronotis.

Maddy Kettle – Intended primarily for children, but since when has that stopped me? It’s light on words, but Eric Orchard’s art is very interesting and unusual.

The titular character teams up with a bear and a raccoon who study cloud cartography in their balloon, and seeks out the Thimblewitch (presumably not the same one mentioned in Lucky Bucky in Oz, although this book does have a somewhat similar feel to Oz) who transformed her parents into mice. I also thought it was a clever touch that very little was as Maddy initially assumed. It turns out that the Thimblewitch enchanted the elder Kettles by accident, and the Spider-Goblins are rather cowardly.

1 Response to In the Company of Comics