Putting the Munchkins on the Map 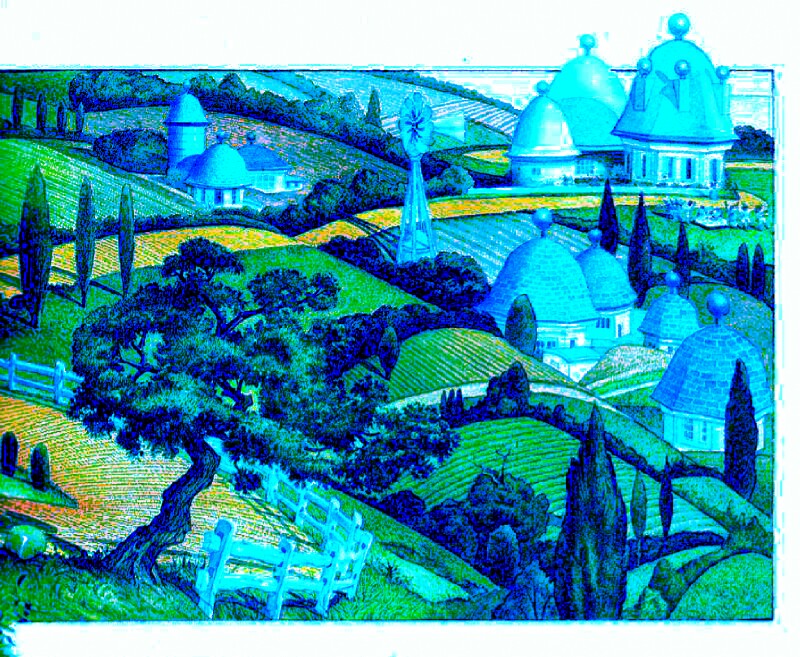 I found the recent post on Munchkin geography at Hungry Tiger Press, which made me take another look at a rather confusing issue raised by The Patchwork Girl of Oz. Basically, the book mentions that Dr. Pipt‘s mountain borders on the Gillikin Country, while the map on the Tik-Tok endpapers clearly shows it in the southern part of the Munchkin Country.

David Maxine’s argument is that it doesn’t make a whole lot of sense for Ojo to say that “the good Munchkin Country” is on the other side of the mountain to the north when, according to James E. Haff and Dick Martin’s map, it would actually be to the south and make the visit to Pipt rather superfluous. After leaving Pipt’s house, Ojo takes the path down to “the open Munchkin Country, where large numbers of people dwelt,” presumably the same as the fertile fields he mentioned earlier.

I don’t know if L. Frank Baum had worked out the map by the time he wrote Patchwork Girl, but it does seem more likely that the one mention of the Gillikin Country is a mistake than the placement of Ojo and Pipt’s dwellings on the map. We know Ruth Plumly Thompson used Baum’s map in writing her own Oz books, and she reveals in Ojo that Ojo and Unc Nunkie’s original home was Seebania, “still an immense but little known tract of wild forest land…bounded on the north by the Munchkin River and on the south by the Quadling Country.” Unc explains, “I made my way out of Seebania, traveling on and on until I came to the center of an impenetrable forest. Here I found a little house, and here I brought up Ojo in comfort and safety.” While I don’t know if Thompson ever completely mapped the Ojo locations, she did indicate that Seebania is just to the east of the Blue Forest. You might think Unc would want to get farther away from his old homeland, but he IS an old man, and travel through the forest was likely slow. By the way, if Unc found an already-built house in the middle of the woods, I wonder what it was used for before. Or did it just grow there?

David also points out that Haff and Martin’s location of the bandits’ cave outside a northern forest doesn’t make a lot of sense, as Ree Alla Bad seems to think it’s part of Seebanian territory, and Thompson’s map has a location labeled “Bandit’s Forest” in the area. I pointed out in a comment that this could actually be the hideout of Vaga’s band from Grampa, although then the hollow tree leading to Gorba’s Garden should be IN the forest. On the other hand, she also places the road shop in Fix City outside the town. It’s certainly possible that both robber bands operate in the same forest. Besides, the gypsies presumably would have headed TOWARD Moojer Mountain, where the reward was being offered, after capturing Ojo outside the Emerald City. Then there’s the fact that, after seeing the gypsy encampment in the Magic Picture, the Patchwork Girl wishes to be “in that grumpy forest this very minute!” It’s not clear why the wish would even work for Scraps when it’s Dorothy who swallowed the pill, but the Oz Club map would also have it that they arrived in a different forest entirely. The story has Dorothy, Scraps, and the Cowardly Lion emerge from the forest in which they appear at the Munchkin River near Dicksy Land. The original Club map places this forest to the northwest of Seebania, while after working in the locations from Merry Go Round it’s shifted to the forest where Dorothy first found the Tin Woodman and Lion. If that’s the case, shouldn’t the Lion know his way around the place? If we assume they actually arrived in the Bandit’s Forest, the river and Dicksy Land would have been to the north. Also, if the forest with the hollow tree is considered part of Seebania, that would reconcile the error of the Club map not having Seebania border on the Quadling Country. The map labels a few different places “Blue Forest,” and while I suppose all the forests in the Munchkin Country would be blue, I think Baum only used this as a proper name for the one where Ojo’s house was located. Merry Go Round has Dorothy identify a wood as the GREAT Blue Forest, shown on the Club map to the northwest of Seebania, and identified by Haff and Martin as the forest between Crystal City and Tappy Town. Similarly, both the mountains surrounding Lake Orizon in Giant Horse and those around the Valley of the Argent in Merry Go Round are called the Munchkin Mountains. The valley is specifically said to be “in the exact center of the Munchkin Country of Oz.”

The location of Mudge, introduced in Cowardly Lion, is also worth examining. The book says that it’s “a blue and barbarous country in the southwestern part of the Munchkin country of Oz.”

Thompson tended to mix up east and west in her books, as did Baum occasionally, but he was pretty consistent in placing the Munchkins in the east and the Winkies in the west. His map, however, placed west on the right side of the map, and later printings gave it a more traditional compass rose so that the Munchkins appeared to live in the west. Thompson tended to go with this, although this is contradictory to the directions established in Wizard. Hence, when the characters retell the story in Ozoplaning, they correctly identify the Wicked Witch of the West as ruler of the Winkies; but Nick Chopper, who started ruling the Winkies after her death, later calls himself “Emperor of the East.” Thompson mostly kept Baum’s original directions in Royal Book and Kabumpo, as well as Giant Horse, but it seems like she’s trying to have it both ways in Cowardly Lion. The Lion tells Notta Bit More and Bob Up that “to the west is the Winkie Country,” but Crunch (who lives at Stone Mountain in the Munchkin Country) waves to the Emerald City “toward the east.” Thompson and Haff both place Mudge in the southeast rather than the southwest, but Thompson’s map puts it on the western side of the Munchkin River, to the north of Seebania. On the Club map, on the other hand, it’s in the far southeastern corner, bordering on the Deadly Desert. This makes a certain amount of sense, as the desert country of Samandra is also adjacent to the larger desert, and Kabumpo says in Silver Princess that, “All the countries bordering on the Deadly Desert are queer no-count little places.” On the other hand, the sandy desert territory of the Tottenhots isn’t near the surrounding desert, and Jinxland does border on the desert but is a fertile area. A later Club map would place the desert country of Hah Hoh Humbad to the north of Mudge. The text of Cowardly Lion really doesn’t tell us too much. Notta and Bob travel north from Mudge to Doorways and the knitting tree, and the Lion’s path intersects with theirs after he visits a Munchkin forest and then heads “steadily toward the south, through quiet little villages, through fragrant fields and meadows, even swimming the broad and turbulent Munchkin river.” (I’m not sure whether the inconsistent capitals appear in every edition of the book, or are limited to the Del Rey edition.) He’s headed toward the mountains in the southern Munchkin Country, although there don’t appear to be any on the map other than the one where Dr. Pipt lives. For most of the rest of the story, the characters have access to the Flyaboutabus, and fly all around the countryside.

Books published after the Famous Forty add some extra details about the Munchkin Country. In John R. Neill’s Runaway, Scraps rides her Spoolicle southeast from the Wogglebug’s college to “a country of gently rolling hills” surrounding “the highest, steepest mountain in Oz,” which the Repairman states is “[n]ext to the desert in the southeastern corner of the Munchkin Country.”

This would seem to be where the Club map placed Mudge, but “southeastern corner” isn’t necessarily that exact. An updated version of the Club map from some time after Haff and Martin died places it in between Doorways and the bandits’ forest from Grampa. When the Wogglebug, Jenny Jump, and Jack Pumpkinhead go off after Scraps, they encounter the Poetree, which the map places in the Great Blue Forest. The Orchard Lands are presumably in this same general area.

Henry Blossom’s Blue Emperor has its own map, showing a somewhat different version of the southern Munchkin Country. In the text, Jam arrives in the Fiddlestick Forest, and the Gump’s head and the trees indicate that Seebania is on the other side of the woods. They aren’t that close on the Club map, but since the borders of Seebania change after Ozma takes the throne of Oz, this could be referring to the former larger kingdom. Most of this area is forested, and perhaps Blossom had a different idea as to where the forest limits were. Along these same lines, Gina Wickwar’s Hidden Prince claims that, after leaving the Gillikin Country for the Munchkin, Princess Vitrea’s party “ascended the upper plateau of the northern Munchkin Country on which the Great Blue Forest is found.” Elsewhere, this place is called the Great Blue Munchkin Forest, and is specifically identified as where Nick Chopper used to live. Oddly, the most recent revision to the Club map includes some but not all of the Hidden Prince locations.

In her Seven Blue Mountains trilogy, Melody Grandy is pretty clear about where the area in which most of its events take place is located: to the east of Lake Orizon, ending at Headland. This region is bordered on the west by the dangerous Jaggedlands, which is why it gets so few visitors prior to the installation of the Fairy Ferry. The most recent Club map puts the mountain homes of the sorcerers Dash and Flinder from Eric Shanower’s Blue Witch in this area as well, but while that’s possible, the map in Adventures shows them on the other side of the river, presumably west of Orizon, although the lake isn’t on that map. Perhaps also worthy of note is that Jandy in Lin Carter’s Merry Mountaineer is a goatherd on a mountain entirely surrounded by the desert kingdom of Mudge. Perhaps this and the Weather Witch’s home are among the mountains in the southern Munchkin Country that the Lion was trying to reach when he ran into Notta and Bob.

1 Response to Putting the Munchkins on the Map