Now we turn to the Quadling Country, literally the “little four” country. The name suggests that it’s the fourth of the main Oz countries to be united. It’s probably at least partially inspired by the Southern United States, which explains why Ruth Plumly Thompson placed her plantation nation of Ragbad there. As is usual with Oz, however, different cultures and climates can exist quite close to one another. 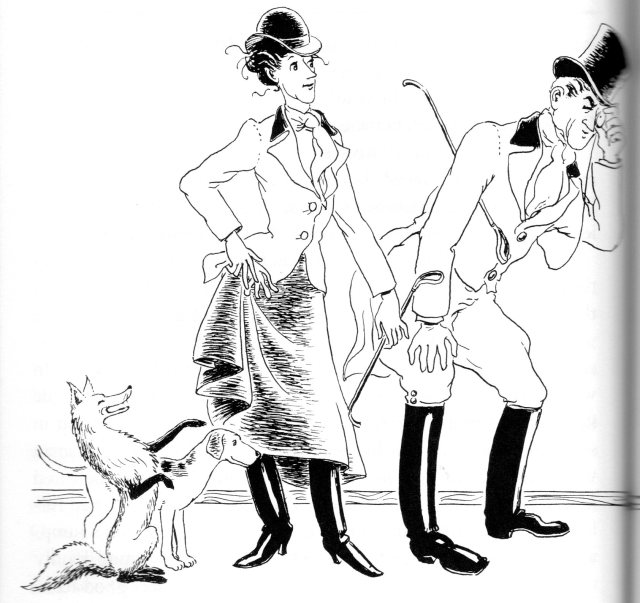 It also contains the English fox-hunting community of View-Halloo (although that also kind of fits with parts of the American South that are very proud of their British heritage) and the European-style Land of the Barons. We’re specifically told in Emerald City that Glinda established the Cuttenclips’ village and Bunnybury to protect vulnerable individuals. There’s no indication as to whether she was also responsible for Bunbury and Utensia. I’m thinking the former might have been her work, but the latter probably isn’t, as its inhabitants have never heard of Ozma. My theory is that Utensia was created by accident due to leakage from one of the life-giving ovens of Bunbury. The two known Defensive Settlements where people with incurable social problems are sent are also in Quadling territory, and also visited in Emerald City. 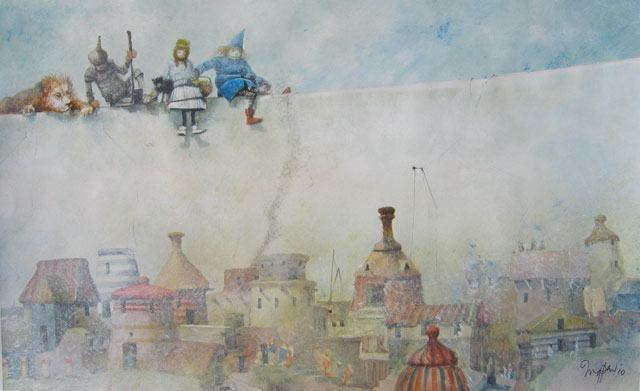 Other isolated places include the walled Dainty China Country, Jinxland with its Great Gulf, the hidden mountain homes of the Hoppers and Horners, and the spooky Scare City. There are places like these throughout Oz, but it kind of seems like the Quadling Country has the lion’s share.

Speaking of lions, the country is also home to the forest where the Cowardly Lion rules as King of Beasts, which is notably expanded in size on Eric Shanower’s map in The Wicked Witch of Oz, incorporating the Forest of Fighting Trees and the location of the hunting lodge of Morrow. 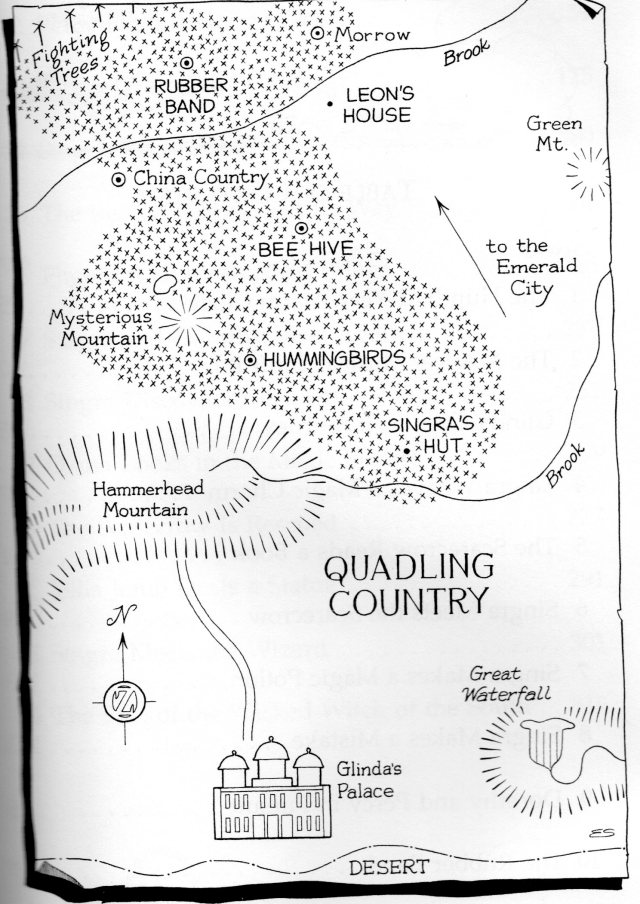 For the most part, maps of the quadrant have remained fairly consistent. The Oz Club map does move the Hammer-Heads’ mountains somewhat so they’ll be more of a barrier to Glinda’s Palace, and relocates the Land of the Barons to the southwest. On Thompson’s own map, the barons’ lands are fairly close to the Emerald City. The northwestern corner of the map is also changed from Quadling to Winkie to explain how the sand boat arrives in Winkie land in Road, which has the effect of making the Quadling the only quadrant that doesn’t include a corner of Oz. James E. Haff and Dick Martin place the Green Mountain mentioned in Wishing Horse in the Quadling Country, presumably because there’s already a green mountain there, Big Enough Mountain.

The story in Speedy indicates that Big Enough was founded by settlers from the Emerald City area. The Wizard of Oz says it is “in the exact center of the Quadling Country,” and refers to it as “the capital of the Quadling Country.” This last statement might have been a mistake, but it’s possible that the mountain was the Quadling capital before Loxo settled there. Blue Emperor says that it’s part of a range of mountains, including Old Smokey where the Wizard Wam has a forge. The Oz Club map also includes locations from Frank J. Baum’s Laughing Dragon, which takes place primarily in a sizable territory ruled by Princess Cozytoes. Since Cap’n Bob arrives in that area on a beach, I have to wonder if it should include an inland sea, or at least a large lake. What the map doesn’t show is the Quadling River mentioned in Martin’s Ozmapolitan, something I addressed in an earlier post. Despite being the only country that’s had the same ruler since the beginning of the series, the Sorceress Glinda, there appears to be a lot we don’t know about the place.