Working Undercover for the Fans

Here’s an interesting article I came across about fan theories, particularly with Star Wars. It basically states that, when Darth Vader revealed he was Luke Skywalker’s father in The Empire Strikes Back, it wasn’t presented as the solution to a mystery. Yet, after that reveal, fans started seeing everything as a puzzle that needed to be solved; and more recently filmmakers have been encouraging this behavior. While I don’t think guessing at possible connections is necessarily a bad thing, the article is right in that this generally isn’t the point of a film or other sort of media. Mind you, I think such speculation is largely just a way to kill time in between movies.

Didn’t Palpatine KILL Plagueis? Then again, if he could manipulate life, maybe that doesn’t matter.
I do have to take issue with the people leaving comments criticizing those who are disappointed that Expanded Universe characters aren’t slated to appear in the third trilogy, pointing out that they’re fictional. Well, of course they are, but fans can feel connections with fictional characters. I think you can be invested in continuity without finding it absolutely necessary that Rey’s parents be previously established characters; those are two different issues. I DO like this theory, although just because E.T. creatures exist in the Star Wars galaxy doesn’t necessarily mean they don’t inhabit other galaxies as well. Humans do, after all.

As far as connections go, it DOES seem odd that, in a galaxy of what must be millions of worlds, the same characters would keep running into each other. But then, that could be seen as the Force interfering to make sure things happen. Yes, it often seems that every event of any importance is somehow tied to a few individual families out of quadrillions. Then again, didn’t A New Hope include two apparently unrelated characters with the surname Antilles?

Someone in the comments pointed out that Khan stating his identity in another film directed by J.J. Abrams, Star Trek: Into Darkness, was poorly done because the other characters have no idea who Khan is. It’s a reveal solely for the audience that doesn’t advance the story. Other commenters pointed out video games that did the same thing, but no one mentioned the one that immediately came to my mind, Chrono Cross. One of the loose ends of Chrono Trigger is that Magus was looking for his sister Schala. This is significant to him because he’s a tragic character who lost his entire world, and now has the hope that his favorite family member could still be alive.

Cross does indeed locate Schala, only the characters who do it have no way of knowing who she is. I never played all the way through the game, but that’s the impression I get. It solves a mystery for the player, but does nothing for Magus’ character arc. I have heard that the character Guile might have originally been intended to be Magus, but this doesn’t appear to be the case in the completed game, and I don’t think he has any particular reaction to finding out Schala’s fate.

One of the comments does discuss the Zelda timeline, which the game designers probably didn’t think much about at first, but later came up with an official one when the fans clamored for it. Then we found out that the first three games in the series (in terms of release, not in-universe chronology) only happen if Link fails in Ocarina of Time. That’s kind of depressing.

There was a link in the article to this usenet thread from 1982 (some time before I was even aware the Internet was a thing that existed) questioning whether Princess Leia said “Clone Wars” (which was eventually revealed to be the case) or “Colon Wars” in her holographic message to Obi-Wan Kenobi. I have to wonder what a Colon War might be. Would it be fought inside the bowels of one of the giant monsters that turn up everywhere in the galaxy? Or would it be a reference to the punctuation mark, perhaps over the interpretation of a particular passage of Jedi scripture? These days, it looks like there are Comma Wars over what someone interpreted as a punctuation error in the opening crawl to The Force Awakens. One of the usenet posts suggests it was short for “Colonial Wars,” and a commenter says he used to think it was the Cologne Wars, over a commodity sort of like the spice in Dune. I have never read nor seen Dune, but I do have to wonder if C-3PO’s reference to the spice mines of Kessel was sort of a Dune reference. Apparently Kessel is known for spices and spaceship races, and actually appeared in an episode of Star Wars Rebels. I probably should try watching that and the animated Clone Wars, but I say that about a lot of television shows. 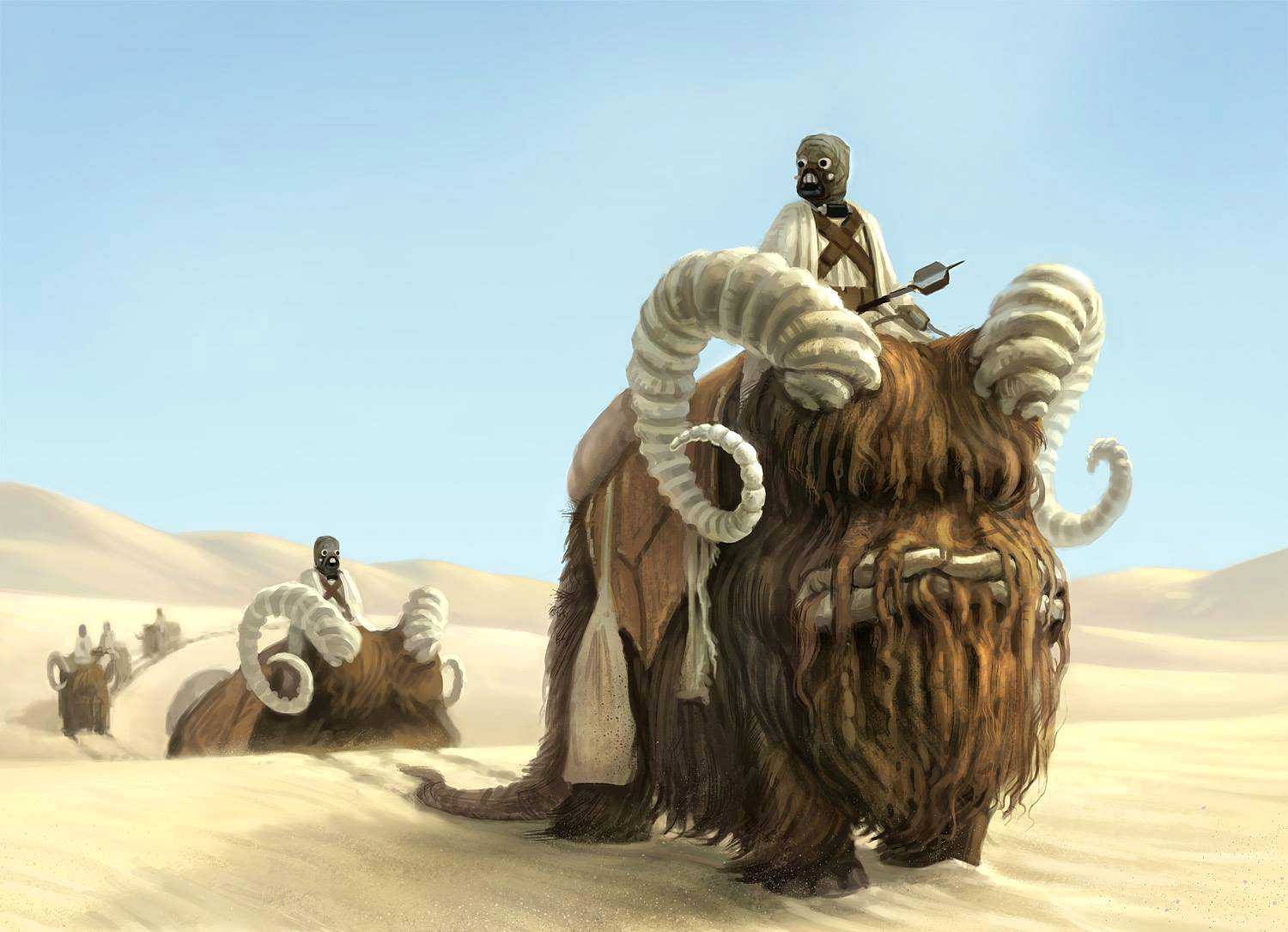 I had forgotten until recently that Obi-Wan has a line about a “wild bantha chase” in Attack of the Clones. Chewbacca’s son also has a stuffed bantha in the Holiday Special. If banthas are native to a world that was of no consequence to the rest of the galaxy at all other than being Anakin and then Luke’s homeworld (sort of the Star Wars equivalent of Kansas), why would one of the animals there be so commonly known? Wookieepedia answers this by saying that they were bred on other planets as well. Also, maybe Obi-Wan picked up the expression from Anakin. Does that mean geese don’t exist in the galaxy? I think someone uses the expression “sitting ducks” in The Phantom Menace. Apparently the novelization of A New Hope has Obi-Wan refer to a duck, and Luke doesn’t know what he’s talking about.

I’ve also been wondering whether all Jedi are warriors. I know it’s a significant aspect of the mythology that wise old men like Obi-Wan and Yoda are ALSO skilled fighters, but aren’t there scholars in the ways of the Force who have never swung a lightsaber? Or are they not considered Jedi? Maybe that’s related to how Maz Kanata is Force-sensitive but says she isn’t a Jedi. And what’s with the military ranks used throughout the series? Both admirals and generals command space vehicles. Are there separate armies and navies? The answers to these questions are probably available somewhere online, but I’m posing them here anyway.

2 Responses to Working Undercover for the Fans