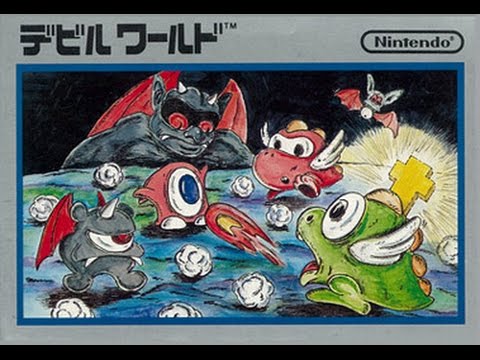 Is everybody ready for me to discuss a video game I haven’t actually played? In this case, it’s Devil World, a 1984 Famicom game designed by Shigeru Miyamoto. While there was a European version, it was never released in North America, due to Nintendo of America’s censorship of religious themes. A lot of American releases have had crosses removed, presumably because Christians would find their use in such contexts to be frivolous. Or is it so non-Christians don’t think the games are promoting a particular religion? Regardless, such symbolism is quite common in Japanese culture, perhaps because the Western notion of religion isn’t as common there. As far as I know, there isn’t any particular problem mixing Shinto or Buddhism with other beliefs, but it’s more common for followers of the Abrahamic faiths to think their religion is the only correct one. I’m not all that knowledgeable on the subject, but I get the impression that mixing different religious and cultural traditions is common in Japanese media. This is definitely the case with Devil World, a game that involves the harrowing of Hell. It’s not Jesus invading Satan’s domain this time, however, but rather a cute little dragon named Tamagon. The name is derived from the Japanese for “egg,” and Tamagon does hatch out of an egg at the beginning of each level.

He resembles Bub and Bob from Bubble Bobble, and I’ve also seen him cited as a possible prototype for another Miyamoto creation, Yoshi. Their egg-hatching sound is basically the same.

The game play is quite similar to Pac-Man, in that you have to go around a maze and collect dots, and there are items that give your character super powers. If you pick up a cross, you can breathe fire at enemies. It’s also impossible to pick up the dots without holding one. Fortunately, there are a lot of them around. Satan himself adds extra challenge, standing at the top of the board and occasionally shifting the scrolling direction.

The maze is more than one screen wide, and the scrolling can sometimes crush Tamagon. The levels come in groups of three, one where you clear the dots Pac-Man style, a second where you have to collect Bibles from the corners of the maze and bring them to squares marked with skulls, and the third being a bonus stage where you just collect books.

The demons that chase you around the maze each only have one eye, and the ones called Medamen look a little like Shy Guys or Waddle Dees.

Really, it’s basically a positive portrayal of Christianity, since you use crosses and Bibles to fight the Devil.

I don’t think crosses giving the ability to breathe fire is Biblical, however. They can be effective against vampires, but people disagree on whether that’s because of the faith of the wielder or the power of the cross itself. Of course, the idea of a crucifix itself having magical power instead of being a conduit for belief in Jesus is one that appears in plenty of Western folklore as well. How many legends have monsters being scared off just because two sticks on the ground are perpendicular to each other? Really, if God wants to incarnate on Earth again, I’d say the cute dragon would be a good form to take. I’m not sure even the Roman occupiers in Judea would have been able to crucify something that adorable.

Speaking of religion and video games, I recently watched this video about Mario and religion. The narrator speculates that the tower in World Five of Super Mario Bros. 3 was inspired by either Dante’s Purgatory or the Great Mosque of Samarra.

It also bears some resemblance to depictions of the Tower of Babel, although both that and Purgatory tend to be shown as made up of concentric circles rather than an actual upward spiral, which Beth has said reminded her of an ice cream cone.

Come to think of it, ice cream cones sometimes appear in Hell in Devil World.

There’s a related video about Pokémon and religion, which mentions how the franchise was banned in Saudi Arabia because the Grand Mufti thought it was a Zionist plot.

Fundamentalist Christians also got in on the act because of the evolution, even though Darwinian evolution involves changes in populations rather than individuals.

The way I see it, there’s enough actually offensive stuff in the world without looking for weird conspiracies like those.