Bernie Can’t Win, Trump Can’t Break Even, and Hillary Can’t Get Out of the Game

One political issue on which I’m somewhat divided is that of voting for the candidate you actually like (well, relatively speaking) versus voting for the person you think can beat the one you don’t like. A lot of the time these two are the same, but there are exceptions. I would imagine some people still blame Ralph Nader for George W. Bush being elected in 2000, but if people really thought Nader would make a better president than Bush or Al Gore (not saying I agree), why not vote for him? The point I always hear is that, if all the people who say, “I’d like to vote for [Candidate X], but there’s no way they can win!” actually voted that way, Candidate X would actually stand a chance of winning. This is probably more true in smaller elections; it’s unlikely that Nader would have won even if everyone had voted for their actual favorite. On the other hand, he WAS on the ballot, so it was hardly the same as writing in your friend’s name. Only voting for the candidates you think can win is both assuming you know the minds of other people, and forcing everyone to participate in political maneuvering. Is that really the job of the general public? I bring this up because I’ve heard some talk about how Bernie Sanders is unelectable, and how if he wins the Democratic primary, the Republicans are going to trounce him no matter who they nominate. Maybe they’re right, but it does kind of strike me as a major assumption.

Didn’t seem to work for Rand Paul, did it?
While comparing Sanders to Donald Trump is pretty bizarre, it is true that they were both deemed long shots before anyone even voted, and they’ve both been making pretty good showings so far. Granted, this is based on one caucus, one primary in a tiny state, and polls of a random sample of the few Americans who will still answer the phone when they don’t recognize the number. I’d really doubt Trump could have been a serious contender, not because he’s an egotistical, racist, misogynistic bully (he is, but I’ve learned that most Americans don’t seem to care), but because he’s been treated as a punchline for pretty much my whole life.

I’ve mentioned before that he’s not my least favorite of the Republican candidates. In many ways, he’s pretty similar to the rest of them. It’s just that you have to actually listen to the others before finding out that they’re jerks, while everyone already knew that about Trump. The devil you know, perhaps? Or would another Bush be the devil we know? I don’t want Jeb for President, but Trump’s attacks on him are increasingly petty and dismissive, as if he’s speaking to a child rather than a fellow candidate. If you think he doesn’t have a chance, why do you need to attack him so much? Picking on people you deem to be weaker than you is never cool, except maybe if you’re doing it for the experience points.

The main strike against Sanders appears to be that he considers himself a socialist, although I’m not entirely sure why that matters when every Democratic candidate is accused of that anyway. You’d think he’d deserve credit even from his opponents for owning it.

Is the knee-jerk reaction against the term “socialism” still so strong that Sanders’ campaign was doomed from the start? Maybe, but I’m not sure it makes sense for people who are okay with socialism to dismiss him because this possibility exists.

At least within my memory, the Democrats have always nominated moderates, so I’d say it’s worth giving an avowed liberal a chance. Now, I do think a lot of things Sanders is promising are unlikely to make it through Congress, but when a complaint I hear about Obama is that he pretty much always starts with something moderate before even making the proposal, could it hurt to start with a more left-wing notion before having it whittled down by the legislators? 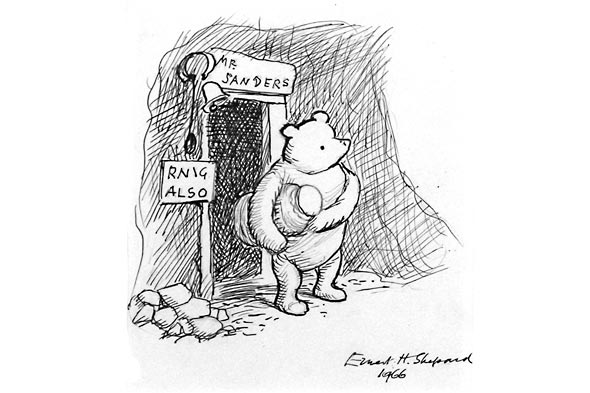 Winnie-the-Pooh supports Bernie. Too bad he’s not American.
That’s not to say there aren’t valid reasons to support Hillary Clinton, who’s more experienced. And I don’t know how an old person not knowing how to use e-mail was ever a scandal, but that really just seems to be her opponents grasping at straws anyway.

She comes across as pretty jaded when compared to Sanders’ optimism, though. Her take is essentially, “Yeah, I thought there was a time when I could go against Wall Street and the lobbyists too. You can’t, so I just roll with the punches now.” Which is understandable, but again, maybe it’s time to actually try making a stand against big money. If it’s not successful, do you think that would make things worse? I don’t believe free health care or public college tuition are impossible, but moneyed interests are going to fight against the idea, and hard. Still, it’s not like we’re not hearing equally ridiculous suggestions from the other side. If you think health care is expensive, just try to find out how much a mass round-up of undocumented immigrants would cost. The Republicans aren’t financially prudent like they pretend; they’re just only willing to spend money on things that will hurt people. If we just buy a lot more tanks, planes, and battleships, it’ll solve all our problems! We have to defend the country, while simultaneously making it clear that we don’t want to make any effort to improve living conditions for most Americans.

4 Responses to Bernie Can’t Win, Trump Can’t Break Even, and Hillary Can’t Get Out of the Game