I Am Big Bird – A documentary about Caroll Spinney, the guy who’s been performing as Big Bird and Oscar the Grouch since the beginning of Sesame Street back in 1969. While it’s really cool that he’s still doing this, he is eighty-two years old now, and obviously he won’t live forever (although the characters hopefully will). The film did introduce his double for Big Bird, Matt Vogel, and I’m sure I’m not the first person to notice that his last name is German for “bird.” Being Big Bird means constantly holding up an arm to operate the puppet’s mouth, and that can be quite physically taxing. Spinney’s story has elements of overcoming adversity, since he was abused by his father and shunned by the other kids in school, and his first wife apparently didn’t approve of his choice of career (which makes me wonder why she married him in the first place, but they didn’t get into that). People interviewed made a point of how both Big Bird and Oscar have some of Spinney’s character traits, one notable one being that both characters live alone. (Well, okay, it’s a little complicated with Oscar, who has elephants in his trash can at times, but he usually seems to be alone there.) While there’s a certain camaraderie among the Sesame Street performers, it sounds like Spinney mostly prefers to just do things with his wife, and not hang around his co-workers that much. He had a friendship with Jim Henson, but from what I remember he didn’t share Henson’s desire to work all the time, instead preferring to relax and take vacations. The documentary touches on some seminal Big Bird moments, including Henson’s funeral, his trip to China, the Follow That Bird movie (which I remember seeing at the theater), and how Mr. Hooper’s death was addressed on the show. Beth pointed out that there was never a time when she thought a dead person was only temporarily gone as Big Bird assumed, and I can’t recall that ever being the case for me either. I’m sure there are some kids for whom that’s the case, because the writers wouldn’t have just pulled that out of nowhere, but I don’t remember ever coming across it in real life. Mitt Romney name-checking the Bird in a 2012 debate was also addressed. There was less about Oscar, but the movie did provide a few interesting facts. The name came from a grouchy guy who worked at a restaurant called Oscar’s, and the voice was modeled on a cab driver who took Spinney to work. The film was an engaging and sometimes sad look at the man behind an American icon.

I feel I should mention that Beth once had a dream or something that Big Bird was actually a human child who was turned into a bird, but if he ever found out he’d go crazy. That’s the dark side of Sesame Street, I guess. And here’s a recent video of Big Bird interning at Funny or Die, which SamuraiFrog posted a few months ago.

What else have I watched recently? 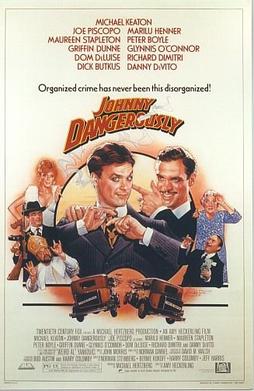 Well, there was Johnny Dangerously, a gangster spoof from 1984 that I probably would have found hilarious if I’d seen it as a kid. As it was, I didn’t laugh out loud much, but it was amusing enough. Beth told me she liked it better than Airplane!, which seems weird to me, but there’s no accounting for tastes. The main thing I knew about the movie was that “Weird Al” Yankovic’s song “This Is the Life” was played over the opening credits. I understand some home video releases actually omitted the song for some reason, but it was intact on Netflix.

Another film that came out in my childhood that I didn’t watch then was Troop Beverly Hills, which I believe was Jenny Lewis’ first film. I’m kind of a fanboy of hers, but that actually makes seeing her childhood performances a little awkward. She played the daughter of Shelley Long and Craig T. Nelson, who were getting a divorce. Long takes over a Girl Scout troop made up of kids of rich parents, and decides it’s appropriate to take them shopping as a scouting activity. I’m not entirely sure why we’re supposed to root for a bunch of rich people who already get pretty much everything they want, but I also can’t understand why one of the higher-ups was determined to take them down. It’s yet another example of a villain whose motivations make no sense and are pretty much just what’s needed for whatever weak plot there is. Also, Long totally makes a rape joke about her. No, she doesn’t use the word “rape,” but she makes some comment about the villain being stuck in the woods and ravished by mountain men, or something like that. It’s weird how casual children’s movies were about that in the eighties. Maybe they still are today. While I can’t remember for sure, I probably thought when I was a kid that all the movies with “Beverly Hills” in the titles were related. I suppose the prevalence of films about the nearby rich neighborhood is an example of a Los Angeles in-joke that was spread around the country because that’s where the film industry is located.