In an old post, I discussed some beings from mythology that are part human and part animal. The most famous of this bunch are probably the centaurs, and I mentioned how they’re sometimes portrayed as wild, orgiastic creatures, and other times as wise and educated. In classical mythology, there are really only two centaurs of the latter variety. The better-known one is Chiron, the tutor of many prominent Greek heroes.

I understand that early portrayals of Chiron showed him with two human legs and two equine ones, while later ones gave him the full four horse legs. He was incredibly skilled at astrology, healing, and archery; and taught these skills to others. Chiron was differentiated from the other centaurs by his parentage. Most are said to be the descendants of Ixion‘s mating with a cloud shaped like Hera, which either produced a half-horse or a human who had sex with horses. The ancient Greeks had some weird ideas about genetics. Chiron, on the other hand, was the offspring of Kronos and the Oceanid Philyra. The Titan took the form of a stallion to mate with the nymph, so their son was part horse. Disturbed by his form, Philyra begged the gods to transform her into a tree. Apollo brought up the young centaur (and no, I don’t know the timeline on this), which is how he came to be associated with archery and medicine. He married the naiad Chariclo, and had three daughters and one son. His daughter Endeis is sometimes identified as the mother of Peleus and Telamon, hence also the grandmother of Achilles and Ajax. When Peleus was almost killed by the other centaurs of Mount Pelius, Chiron saved his life, arranged his marriage to the Oceanid Thetis, and raised their son Achilles.

The centaur was immortal, but when accidentally given an incurable wound with one of Herakles‘ poisoned arrows, gave up this immortality and was turned into the constellation Sagittarius.

It is said that he gave his eternal life in exchange for Prometheus’ freedom. In Rick Riordan’s universe, he’s still alive, and will be as long as there are still heroes to train.

The story of Chiron’s demiseis also often conflated with that of Pholos, the other civilized centaur, although the more common story there is that he dropped one of Herakles’ arrows into his own leg while examining it. 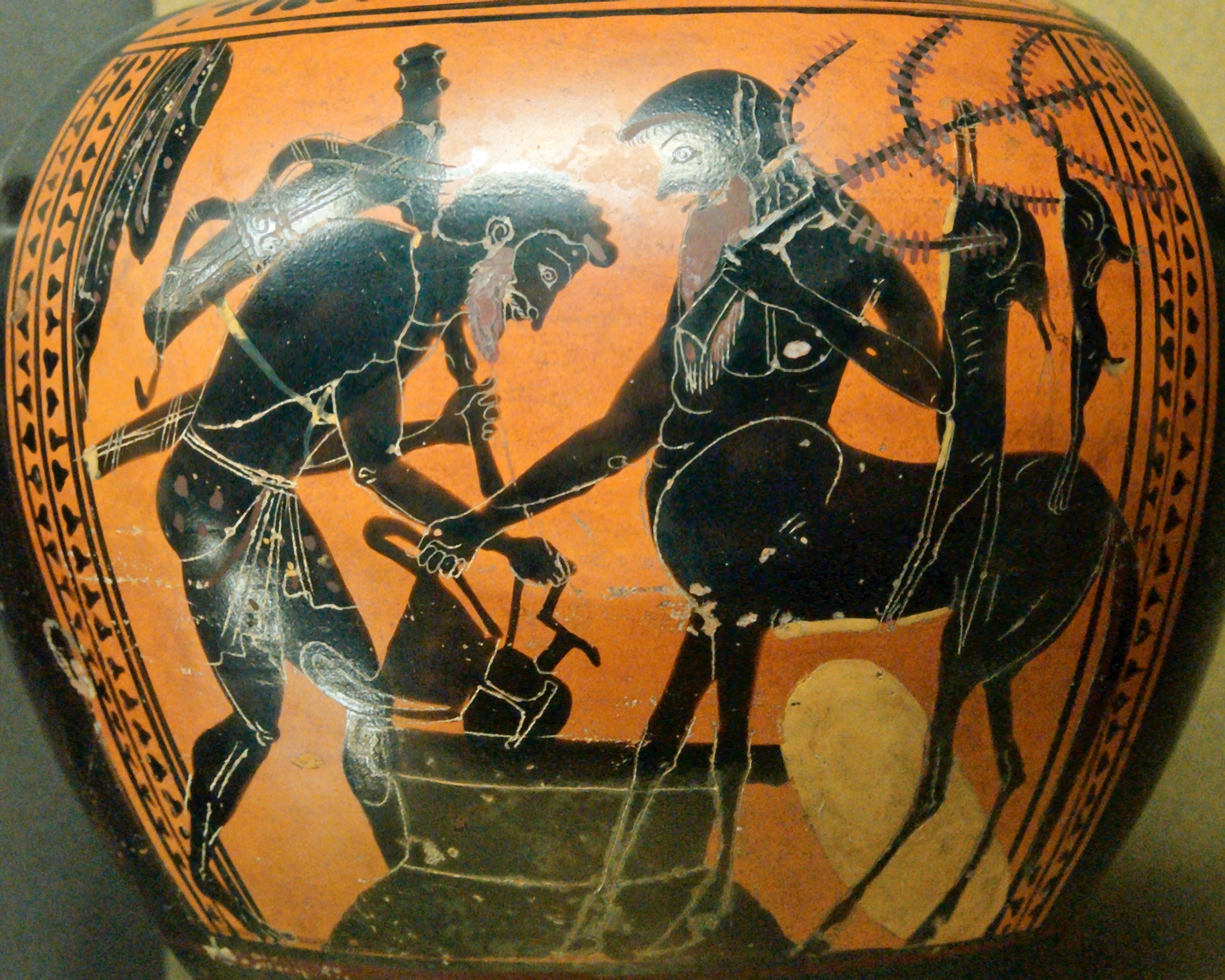 One source has it that Pholos was the son of Dionysus‘ tutor and companion Silenus, hence also not being a descendant of man-on-cloud action.

The less civilized centaurs, which means pretty much all the rest, were known for being rapists. When Pirithous, King of the Lapiths of Thessaly, invited his centaur neighbors to his wedding, they tried to carry off and have their way with the female guests, including the bride. This led to a war between centaurs and Lapiths, with Pirithous’ best friend Theseus helping out the human side.

They eventually drove the centaurs out of Thessaly. Some other centaurs were driven mad by simply the scent of wine and were killed by Herakles, which led to the accidental deaths of the two civilized members of the tribe. There were also said to be horned centaurs living in Cyprus, and fish-tailed ichthyocentaurs who were Chiron’s brothers.

Female centaurs didn’t start appearing until fairly late in the game, although they were presumably around before that.

One centaur significant enough to receive his own name and occupation was Nessus, ferryman on the River Euenos. He tried to rape Herakles’ wife Deianeira after taking her across the river, then tricked her into using his blood to kill the hero.

I’m in the process of reading this series of posts on the Chronicles of Narnia, and the author suggests that Narnian centaurs are good and noble because they represent humanity in control of their animal natures. This may be true, but I’d say Chiron is the more likely source. 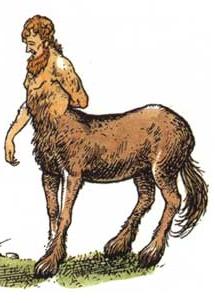 Lewis also specifies that centaurs have huge appetites because they have two stomachs to fill. I know J.K. Rowling was inspired by the Narnia series, and her centaurs in the Harry Potter books are pretty close to C.S. Lewis’ in being learned and specializing in astrology and prophecy. Even so, Firenze is specified to be different from his fellows in that he gets along with humans. I’ve seen a few indications that, when Harry and Hermione trick Dolores Umbridge into going into the woods with the centaurs, the mythological source makes it likely that they raped her. Obviously the book doesn’t come right out and say this, and it seems like rather too disturbing a narrative punishment even for her. She refers to them as half-breeds, but I don’t know of any indication that the ones of Rowling’s world had any human (or godly) ancestry at all. While The Magician’s Nephew says that fauns, satyrs, and dwarfs emerged from trees at the creation of Narnia, I don’t think it gives any origin for centaurs. Humans and horses having babies probably wouldn’t go over too well in modern young adult fiction. Well, it does happen in Xanth, but Piers Anthony seems to have a desire to actually top the perversion in classical mythology. He’s also quick to point out that female centaurs are always naked, which makes sense but probably didn’t need to be such a major focal point. From what I remember, the female centaurs in the film version of Prince Caspian were wearing what looked like tank tops when not fully clothed. 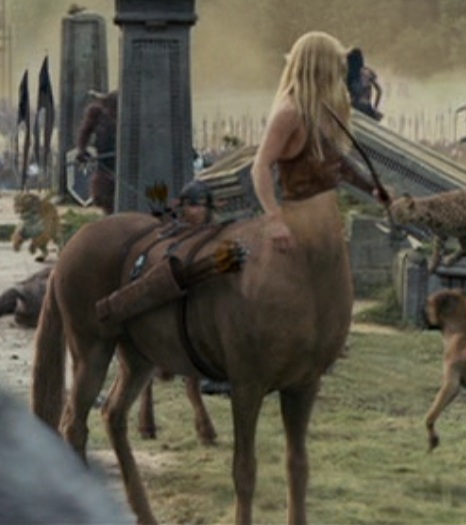 The centaurides in Fantasia wore flowers over their breasts, except apparently in one scene where they were bare-chested but lacking nipples.

The Oz books obviously don’t go into such details, but there are centaurs in Rachel Cosgrove Payes’s The Hidden Valley of Oz. They’re called Equinots, and they carry lassos in order to capture humans to use as groomers. The Equinots wear lavender satin jackets and purple cords to tie back their hair.

6 Responses to Left, Right, and Centaur