Every Disability Conceals a Vocation, Except the Ones That Don’t

While reading Ana Mardoll’s deconstruction of the Chronicles of Narnia, I came across this quote by a moderator who goes by Chris the Cynic, which I felt was worth sharing:

During my insomnia last night I watched the movie Wreck it Ralph. [Spoilers follow.] (It’s about arcade game characters) One of the main characters was a glitch. It turns out her back-story is more complicated than that, but the entire society around her was coming down on her hard for being wrong and bad and everything not-nice and she knew that it was better to make up a fictitious disease and claim to have it than publicly admit she was in fact a glitching character. (Did not help in the least.)

And glitching did cause her problems for quite a while because what it consisted of was, at random, becoming momentarily non-solid or suddenly jumping to a location not quite where she started. Neither of those is particularly helpful if you’re driving a race car. So it seemed to be a disability. By the end it turned out that those are kind of, sort of, super powers (see various X-Men, for example) so by embracing it and learning to control it rather than conform to the standards everyone else had set for her everything worked out well.

Now this can be read two ways. The way I think we’re meant to read it is that she was being told that who she was was bad, she had internalized it, and when she finally decided to be who she was regardless of what other people thought things worked out better. That’s a good message.

But it can also be read that she had a disability, and then when she looked for some kind of silver lining rather than try to deal with the disability as a disability that made things work out for the better. That’s a bad message. It tries to pass off disability as “Blessing if you look at it from the right angle.”

But both readings are possible for the same movie.

Wreck-It Ralph is a favorite of mine, and while I am glad that Vanellope was able to turn her glitching into an asset, I’m not entirely sure why. We learn in the course of the film (and yes, there are SPOILERS here) that Vanellope is glitchy because Turbo tried to remove her from the game code in order to take control of Sugar Rush, but he couldn’t get rid of her completely, so she functioned abnormally. This is common for things that remain in a video game’s code but aren’t supposed to be used in the final product, which is why you get stuff like the Minus World in Super Mario Bros. But how does this glitching turn into something she can control? The comparison to the X-Men is apt, as one of the main themes of the comic is that seeming disabilities can be turned into strengths.

That said, it’s somewhat skewed by not showing us mutations that aren’t of any practical use. The combination of disability and super-ability is common throughout Marvel Comics. Professor Xavier has amazing psychic powers, but he’s a paraplegic. The same accident that blinds Daredevil gives him heightened senses in other respects.

And more recently, Jane Foster gains the powers of Thor while suffering from cancer, and while it doesn’t affect her in thunder god form, it gets all the worse when she reverts to her mortal identity.

Part of this is probably linked to the idea that, if you lose one sense, the others become more powerful to make up for it.

From what I understand, there’s a grain of truth to this, but it isn’t anything mystical so much as just the other senses having to work harder to compensate. It’s not like gouging out your eyes will give you a stronger sense of smell. And while I understand Daredevil’s powers are linked to his blindness (I honestly don’t know a whole lot about that particular character), the Professor’s mental abilities didn’t cripple him. According to the Wikipedia entry, this happened when an alien dropped a stone block on him. Certainly it wouldn’t be a disadvantage for him to be able to read minds AND walk.

In the Narnia thread, the subject of disability came up in relation to the magician Coriakin transforming the Dufflepuds when they piss him off, making them unable to move around except by jumping. 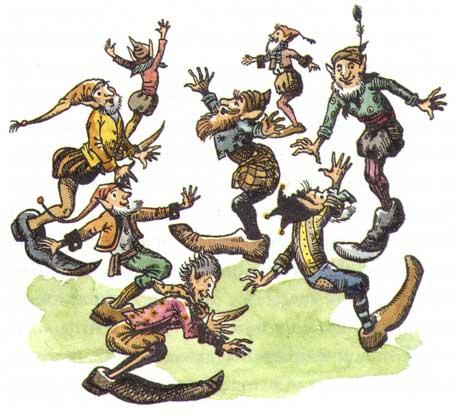 It was suggested that C.S. Lewis was drawing a comparison to his own disability, which has something to do with his thumbs not functioning normally, and was apparently part of why he pursued a career in writing. It’s still a common notion among the devout that God does everything for a reason, and never gives you more than you can handle. I’m sure we can all think of examples where the latter isn’t true; and for the former I have to question whether there might be better ways of accomplishing these goals, especially for an all-powerful being. I’m reminded of how, in the movie Signs, we’re supposed to accept that God gave Mel Gibson’s son asthma so the alien invaders wouldn’t be able to kill him. Because being able to survive this one thing that could likely have been avoided in some other way was worth having trouble breathing for his entire life, I guess. But this kind of thing can be effective in fiction, while I’m not sure it ever is in real life. If God really wanted Lewis to be a writer, wasn’t there a better way to let him know that than by giving him bad thumbs? There are certainly plenty of writers who have perfectly normal thumbs. And even if that can be turned into an advantage, there are plenty of disabilities and hardships that can’t. That’s part of why I’m not so keen on the term “differently abled,” even though it was probably coined with the best of intentions. Even conditions that can be seen as a trade-off of sorts aren’t going to be that way for everybody. I’ve been diagnosed as being on the autistic spectrum, and while I hear that makes my mind function more efficiently in certain ways, that doesn’t always make up for the drawbacks. And it’s nowhere near as severe for me as it is for many people anyway. A few years ago, there was a television show called Touch that Beth and I disparagingly called “Magic Autism,” because the basic premise was that an autistic kid was able to detect patterns in how the world worked, as if mental conditions are always countered by spiritual abilities. Not that we ever watched the show, but I found its existence insulting.

Another commenter links to an offensive letter from Lewis regarding homosexuality, which sees him taking a position that’s still pretty common today, derived from the idea of hating the sin but loving the sinner. I don’t know how often I’ve heard people say something like, “Yeah, homosexuality is a sin, but so are a lot of other things.” Except “sin” is an incredibly broad category that affects both things that hurt others (murder, stealing, rape, having affairs) and things that don’t (being attracted to people of the same sex, worshipping other gods, taking God’s name in vain, wearing garments made of two kinds of fabric). Come to think of it, the guy who supposedly wrote most of this down was said to have had a speech impediment. Was that also supposed to be for the greater good? I’m sure I’ve written before how odious I find the idea that ALL sin is equal before God. I’ve also addressed how religion is often against heterosexual intercourse as well, unless done in very specific ways that strangely seem a whole lot more legalistic than spiritual. Apparently some people still think they’re conceding something to gay people when they say it’s okay to have homosexual desires, just not to act on them. God gave people such desires so they could overcome them, or something like that.

Lewis draws a comparison to a blind man Jesus healed “that the works of God should be made manifest in him.” So God made some guy blind for years just so Jesus could show off? Doesn’t this turn a kindly act by Jesus into an exploitative performance? Now, I’ve never understood why, if Jesus had such miraculous powers, he limited himself so much in scope. And these healing stories are also mixed up with the archaic notion that demonic possession causes both physical and mental ailments. But really, can anyone find a way in which “I made you gay for some unknown purpose down the line, and until then you aren’t allowed to have any sexual relationships because it would make me tut-tut at you” DOESN’T make God seem like a jerk?

1 Response to Every Disability Conceals a Vocation, Except the Ones That Don’t