Attack of the Killer Sprout

I’ve finished a few books recently, and I think some of them deserve their own posts. Here are a few about which I don’t have quite as much to say, which shouldn’t be taken as an indication that I didn’t enjoy reading them.

My Hero, by Tom Holt – This one is about fictional characters crossing over into reality, and authors entering their own stories. There’s definitely a similarity here to Jasper Fforde’s Thursday Next series, right down to Hamlet being one of the characters who visits the real world. I didn’t find this to be one of Holt’s best, but it had its clever elements, including a sentient gun.

Paint Your Dragon, by Tom Holt – Here, Holt revisits the legend of St George and the Dragon, when the spirits of the originals come to possess statues made by a master sculptor. There are musings on the nature of good and evil, when St George turns out to be kind of a jerk, and the dragon just wants to live his life. Other statues come to life as well, and Kurt Lundqvist makes a return appearance. There’s also a lost contingent of demons from Hell with whom the saint hangs around, his reasoning being that they’re actually all on the same side. There are some plot threads that don’t really go much of anywhere, but overall I liked this one. 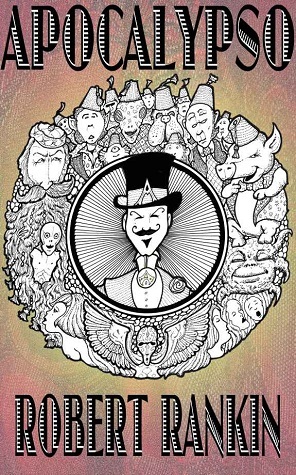 Apocalypso, by Robert Rankin – I believe this is the second appearance of Rankin’s team of paranormal investigators, Sir John Rimmer, Dr Harney, and Danbury Collins. Working for the Ministry of Serendipity located under Mornington Crescent, which secretly runs the world, the three of them go to a Pacific island where an alien sprout monster is making a comeback. The alien, whose name is Dilbert Norris, landed on Earth centuries earlier and got humans to worship him as a god, but was trapped under the sea after the sinking of Mu. The main protagonist, however, is actually a guy called Porrig (actually Padraig, but nobody calls him that), someone who always manages to put his foot in his mouth. He also draws offensive comics that he doesn’t understand why people aren’t interested in, and even his parents don’t particularly like him. He inherits a derelict bookstore from his uncle, the magician Apocalypso, and discovers a way to shift between alternate worlds by using harmonics. Accompanied by a dvergar named Rippington and his distant ancestor who can’t die until he’s returned a feather to an angel, he has to find a way to defeat Dilbert. There are a lot of the usual elements in Rankin novels here, including running gags, secret government conspiracies, monster attacks, sprouts, and a lazy and unpopular but imaginative hero. I understand the Kindle edition, which I read, was edited within the past few years by the author, who fixed some plot holes and cut some penis jokes.

1 Response to Attack of the Killer Sprout