Legends of the Levant 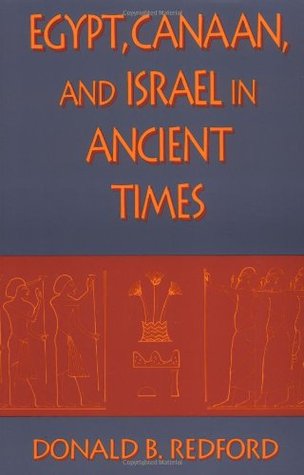 Egypt, Canaan, and Israel in Ancient Times, by Donald B. Redford – This was an interesting read. The prose was rather dry and a LOT of information was packed in, but I guess I’m putting my history degree to use. It dealt with Middle Eastern politics, specifically between Egypt and its neighbors on the Arabian Peninsula, which is a complicated topic. It starts with the beginnings of civilization, and runs up through the fall of the Kingdom of Judah. Obviously a book involving Israel is going to overlap with the history as related in the Bible, and Redford’s conclusion is that it the Good Book isn’t a particularly reliable source. That’s not to say it isn’t a valuable historical resource, but it includes a lot of legend mixed in with its history. I’ve seen before the hypothesis that the Deuteronimistic History (Deuteronomy, Joshua, Judges, Samuel, and Kings) was mostly written in the seventh century BC during the reign of King Josiah of Judah, although of course it was based on earlier oral and written material. Josiah ruled from around 641 to 609 BC, at a time when the death of Ashurbanipal meant a decline in Assyrian power, so he was able to capture some of the territory in the former Kingdom of Israel. He also was a supporter of the monotheistic Yahweh-only movement, so the priests and the prophets with those beliefs regarded him as an ideal king. The thing is, even people who aren’t total Biblical literalists, who are willing to admit that maybe Adam and Eve weren’t actual historical figures, will still go out of their way to make the evidence fit the Bible, rather than vice versa. Sure, it’s possible to go too far in the other direction and latch onto anything that seems to DISPROVE the Biblical account, but I don’t think this is as common among legitimate scholars. Redford briefly comments on the tendency that was popular in the nineteenth century of trying to explain Biblical stories rationally. For instance, there are theories to explain how the plagues in Exodus might have worked without involving anything supernatural. It’s an interesting idea, but why assume the order of the plagues was accurate but other details weren’t? That’s not to say there isn’t some historical basis for the Exodus story, but it’s unlikely it was remembered exactly after several centuries. Redford suggests that the early Biblical stories were combined from a variety of other legends, including that of Canaanites gaining power in Egypt and then being conquered, accounts of ancient chieftains like Jacob (whose existence apparently is attested to in sources outside the Bible, but that doesn’t mean he was the ancestor of the entire nation of Israel), and a hero legend about a guy down on his luck who managed to become rich and powerful. It’s interesting to me how Genesis makes a point of the Israelites being only distantly related to the Canaanites when they likely were of similar ethnicity. Much of the material in Genesis about the origins of nations and tribes is more political than genetic, however. Also, Redford indicates that Akhenaten’s monotheism wasn’t all that much like what the Hebrews practiced, a hypothesis that was central to another book I read that I found intriguing but a bit of a stretch.

Jesus Before the Gospels: How the Earliest Christians Remembered, Changed, and Invented Their Stories of the Savior, by Bart D. Ehrman – Speaking of the Bible and inaccurate memories, that’s the main focus of this book. I generally enjoy Ehrman’s writing, which presents scholarly ideas in a format that laypeople can easily understand. Here, New Testament history is mixed in with theories of memory to explain how so many different views of Jesus arose in a relatively short period of time. Eyewitness accounts are not always reliable, and there’s no evidence that any of the Gospels were written by eyewitnesses anyway. The present situation can also affect memories of the past, which could be why some of the stories in the Gospels aren’t particularly accurate to what we know of the time and place in which Jesus is generally thought to have lived, but are quite applicable to Christian communities later in the first century. He does, however, indicate that he thinks the general gist of memory tends to be correct, and the Bible likely does contain authentic memories of Jesus. Whether or not you agree with Ehrman’s conclusions, he definitely gives readers plenty to consider.

12 Responses to Legends of the Levant