Aslan Is Just All Right with Me

The Magician’s Book: A Skeptic’s Adventure in Narnia, by Laura Miller – The author, a writer for Salon, takes a look back at some of her favorite books from her youth. At age thirteen, Miller felt betrayed when she found out about the Christian themes in the Chronicles of Narnia. To her, Christianity was part of the dull world from which Narnia offered an escape. While I believe I was always aware of the Christian themes in the series, I totally understand where she’s coming from. It does raise the question of whether these themes improved or ruined the books, or really didn’t have much effect at all. I would say that his emphasis on blind faith and his misogyny might have related to Lewis’ religious views, although there was also his British conservatism to deal with. Lewis had a tendency of lumping together things he didn’t like even when it didn’t make a whole lot of sense, as with Eustace Scrubb’s non-smoking, teetotal, non-fantasy-reading, feminist parents who wore special underwear. At one point, Miller notes how one of the many negative traits he gave to the Calormenes was that they ate garlic, kind of an odd thing to be against. Hey, I’m not keen on spicy food, and I still like garlic. Anyway, Lewis was allegedly won back to Christianity as an adult by the argument that Jesus’ resurrection was one case when myth became reality. That suggests to me that, despite his insistence that he was a reluctant convert, he always somewhat leaned that way. He might have thought Jupiter and Odin were cool, but I doubt he ever had any intention of praying to them. I do get how Christianity seems rather bland compared to the eccentric color and flavor of pagan mythology. There are occasional elements of Canaanite mythology that managed to sneak into the Bible, like the Leviathan, but that’s kind of the exception rather than the rule. And does it really make sense that how we think and live our lives should revolve around a guy who lived in a small desert territory 2000 years ago? There’s a certain fairy tale quality to a Galilean carpenter turning out to be the most important person in history, but why should nothing as significant as the crucifixion ever happen again, and why is our knowledge of the event attested to only in a handful of writings from decades later that can’t even agree on the details? For that matter, Aslan isn’t even an especially good Christ figure, as there’s nothing humble about a lion, and even his death seemed more to get Edmund out of trouble than to save the entire world from sin.

Miller interviewed some other writers about their thoughts on Narnia. Neil Gaiman summed up a large part of why both Miller and I enjoyed the books, that it was an “infinite number of stories waiting to happen.” Lewis hardly put the level of world-building into his fantasy as J.R.R. Tolkien did (not even remotely close), but I think it’s partially because of that that there’s a sense just about anything can happen. I get the same basic feeling from Oz, and it’s present in other fantasy worlds as well. I think that’s one reason I stuck with Xanth despite its rampant misogyny (albeit misogyny of a different sort than Lewis’; he was more the sort who feared any hint of female sexuality, while Piers Anthony’s women tended to be nothing BUT sex objects). And while it’s primarily intended as satire, I get much the same impression from Douglas Adams’ Hitchhiker’s Guide to the Galaxy. When I say “just about anything can happen,” I don’t mean they’re pure nonsense, but rather that it’s easy to incorporate all kinds of things into these worlds. As Miller writes, “Lewis had poured into his imaginary world everything that he had adored in the books he read as a child and in the handful of children’s books he’d enjoyed as an adult. And there is more, too: treasures collected from Dante, from Spenser, from Malory, from Austen, from old romances and ballads and fairy tales and pagan epics. Everything that Lewis had ever read and loved went into Narnia, and because he was a great reader, these things were as deeply felt by him as actual experiences.” Obviously mixing all this together means things don’t always hold together that well, but there’s an appealing melting-pot quality. As such, it’s kind of paradoxical that Narnia can include talking animals and beings from just about every sort of European mythology, yet the humans there make a distinction between themselves and the dark-skinned Calormenes. Why would the Telmarine Narnians be fair-skinned when it’s implied their female ancestors were Polynesian, anyway? It sort of reminds me of J.L. Bell‘s article about the Tottenhots in The Patchwork Girl of Oz, how L. Frank Baum used racist stereotypes in describing them, yet made a case for tolerance and diversity throughout the Oz series. 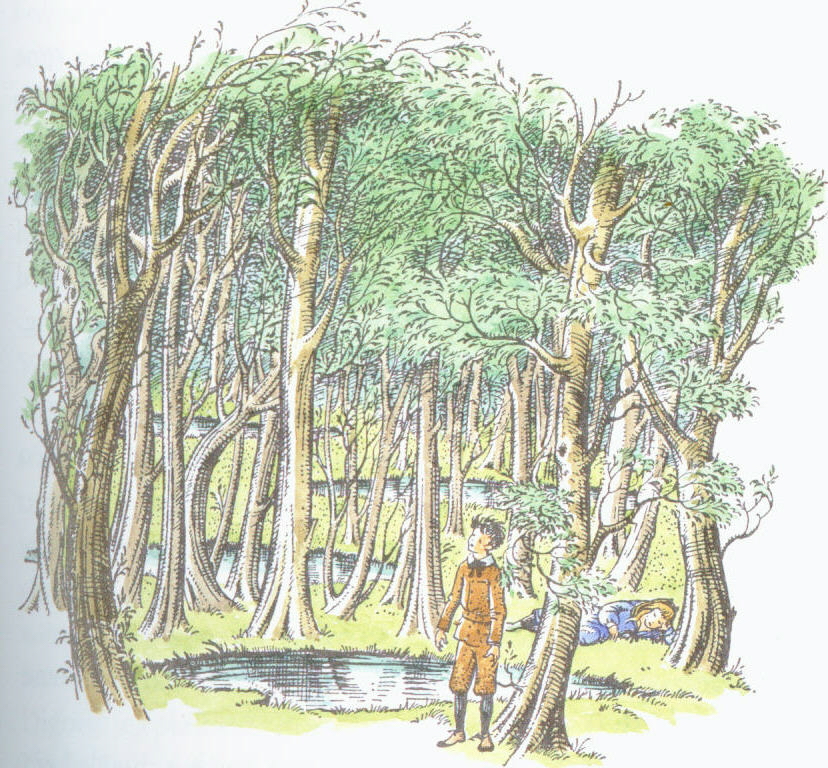 Along much the same lines as the infinite adventure idea, Miller devotes some attention to the Wood Between the Worlds in The Magician’s Nephew, a sort of in-between place that she compares to the Tibetan Buddhist state of bardo (basically the limbo in between incarnations) and the hallway of doors in Alice’s Wonderland.

Picture by Allogagan
It’s kind of disappointing that only two alternate worlds are visited from this way-station. One thing it reminds me of, as well as a view of the passion of Jesus that I feel takes on the mythical significance Lewis presumably saw in it, is Salvador Dali’s painting of the railway station at Perpignan.

He apparently had a vision of what he called “cosmogonic ecstasy” while there, and he came to regard it as the center of the universe. As bizarre as Dali could be, that makes a certain amount of sense to me. Certainly train stations come across to me as much more magical than, say, airports, despite the fact that flying vehicles were the stuff of fantasy for ages.

17 Responses to Aslan Is Just All Right with Me