I don’t recall when I first heard the term “mana,” but it’s present in a lot of video games, especially role-playing ones. I think I used to get it confused with manna, the stuff the Israelites ate in the desert.

They ARE both supposed to be heavenly in origin, but I don’t think there’s any etymological connection. This article from two years ago explains where the word originated, and how it became so common. It appears in a lot of Austronesian languages, basically the ones spoken in the Pacific Islands. The word can mean a lot of different things, but it pretty much always has something to do with power. One linguist speculates that it originally referred to wind or lightning, then later came to mean mystical force in general. When Robert Henry Codrington, an English missionary to Melanesia, introduced the concept in Europe, there was some speculation that it was the most basic understanding of spirituality. In 1969, Larry Niven wrote a story in which mana was basically the measure of magic, and it could be used up. Specifically, Niven’s story had wizards drawing magic from the land, which was later incorporated in the Magic: The Gathering collectible card game. In other games, mana is more a gauge of how much magical power someone has left, and it can be recharged. That’s not to say magic being drawn from the land is totally absent in video games, as the harvesting of Mako energy in Final Fantasy VII is sort of a variation on the same idea. Anyway, apparently the first video game to use “mana” in the now-common way was Dungeon Master, released in 1987 for the Atari ST, and later ported to other systems as well. 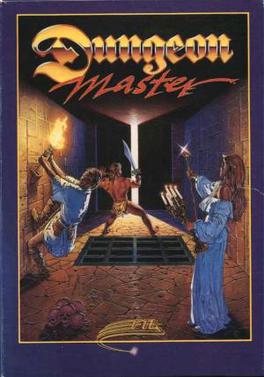 As a fan of the video fantasy role-playing genre, I’m kind of embarrassed I hadn’t heard of this one.

Its innovations included a first-person three-dimensional view of the dungeon you were exploring (also used in Tunnels of Doom for the Texas Instruments home computer and the first Phantasy Star) and a battle system that was action-based instead of having everyone take turns. From what I’ve read, each member of your party has three physical attributes: Health, Stamina, and Mana.

Mana could be regenerated by sleeping or drinking a potion. The magic system had additional complications, like the use of runes to affect how powerful a spell was. I believe you also built up spells by using them multiple times, similar to the system used in Final Fantasy II (the original Japanese one, not the American name for FF4).

While video game series like Final Fantasy and Dragon Quest don’t always use the term “mana,” they do use the basic idea of a quantifiable amount of magic a character can use, with more powerful spells generally taking more of it. The original FF was different in this respect, as it instead allowed a magic-user to cast a certain amount of spells from each level.

As with much of that game, this system was based on Dungeons & Dragons, although it was actually a little less complicated. In earlier versions of D&D, not only could you only memorize a certain number of spells for each level, but you forgot each spell after using it. From what I understand, D&D later ditched the magic levels, then brought them back in a simplified form. What’s even more confusing is that a magic level is different from an experience level, although your ability to use more spells from higher levels increases with experience.

Later FF games went with the general mana gauge system that DQ had been using from the beginning. The DQ series also made spells something a character simply learned as they gained experience, with the occasional exception like how the Zoom spell in DQ5 has to be specially obtained. The potion that will refill your magic power is called Ether, after the mysterious fifth element, but it tends to be so expensive that you’re better off just waiting until you can find an inn or pitch a tent unless you’re in an emergency situation. And no, I’m not sure why sleeping heals pretty much everything but you can only do it in specified places. Maybe it’s so there’s no danger of monsters attacking while you sleep.

I feel I should also mention the Mana series, as the concept is right in the title. Well, it is in the standard English translations, anyway. In Japan, the series is called Seiken Densetsu, literally “Legend of the Sacred Sword.” And the first one was originally Final Fantasy Adventure in the United States, presumably to cash in on the relative popularity of that series, even though we’d only gotten two of its four games over here. It was later remade as Sword of Mana in 2003 and Adventures of Mana this year. Even though “mana” wasn’t in the Japanese title, I’m pretty sure it was still used frequently in the games themselves. 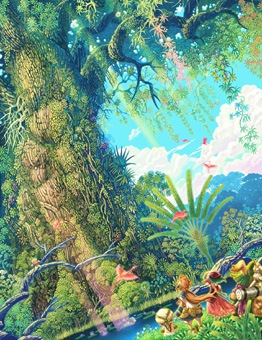 There was a Mana Sword, a Mana Tree, Mana Knights, Mana Beasts, and so on. I’ve written a few times about the second game in the series, Secret of Mana, which I watched my brother play on the Super NES. There are quite a few similarities to the FF series, including the appearance of Moogles (I know the first game also has a Chocobo), but the style tends to be more whimsical. According to Wikipedia, game designer Koichi Ishii was inspired not only by J.R.R. Tolkien, but also Lewis Carroll and Tove Jansson.

4 Responses to Mind Your Mana