I don’t know where the idea of supernatural beings assisting magicians originated, but perhaps the most prominent example are the jinn that will serve anyone who releases them from bottles. King Solomon is said to have had a ring that forced jinn to serve him, and he trapped many of them in these bottles to keep them from causing trouble. In the traditional Aladdin story, the hero has both a lamp and a ring that can summon jinn to do his bidding. Stories of magicians often have them conjuring demons, with the evil spirits forced to do as the summoner commands, but their often finding ways to trick or influence their supposed masters. At other times, the summoned beings are much more agreeable. This idea shows up from time to time in the Oz books, often with an item being necessary to command a supernatural helper, but not always. The Winged Monkeys in The Wonderful Wizard of Oz are just such animals, being bound to serve whomever summons them with the Golden Cap, but only three times per summoner. This was a punishment by the sorceress Gayelette for ruining the groom’s clothes on her wedding day, and the Cap eventually fell into the hands of the Wicked Witch of the West.

As I indicated in an earlier post on the monkeys, I have to wonder if being magical servants enhanced their power, as one of her commands was to conquer and enslave the Winkies. It seems like some of them would have been able to fight back otherwise. It’s also interesting that it counts as one of Dorothy’s three wishes to take her back to Kansas even though the monkeys are unable to fulfill it, which never seemed fair to me. 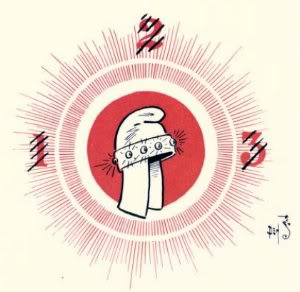 Alexander Volkov correctly points out in his somewhat altered version of Wizard that the Scarecrow, Tin Woodman, and Cowardly Lion should also be able to each get three wishes from the simians, but they never do. I don’t know if there are any traditional legends of monkeys serving magic-workers, but L. Frank Baum did say he wanted to do things differently in his book. The Witch also has a silver whistle that she uses to summon her wolves, crows, and bees; but it’s not clear whether they’re bound to the whistle like the monkeys are to the Cap.

In the short story “The Queen of Quok,” the young King of Quok finds a secret panel in the headboard of his mahogany bedstead, which contains a little book of folded pages. Burning a page summons the Slave of the Royal Bedstead, a small, round man who smokes a black briarwood pipe. He provides the king with a magical leather purse that contains an unlimited amount of money, but has to be taken out one twenty-five-cent piece at a time. Baum also uses the summoned being concept in The Master Key, in which Rob inadvertently calls up a demon by touching the Master Key of Electricity. Queen Zixi of Ix has Zixi herself summon “those invisible imps that serve the most skillful witches” to create an imitation cloak and to ask advice on how to defeat the Roly-Rogues. Jikki also uses the real cloak to create five identical servants who will do what he commands, but won’t do anything for anybody else.

The valet finds them disturbing, and Queen Lulea gets rid of them. And in The Enchanted Island of Yew, Prince Marvel magically summons his friends the Prince of the Knooks, King of the Ryls, and Governor of the Goblins to find out how to deal with the High Ki of Twi. He also calls on the fast-moving Sound Elves (possibly the same as the Sound Imps from The Life and Adventures of Santa Claus) to send messages to his allies. In his case, the beings he summons are associates rather than servants. The Shaggy Man uses the Love Magnet to call Johnny Dooit in Road, but whether Johnny has to appear or just chooses to isn’t specified.

In Ruth Plumly Thompson’s Oz books, there’s the magic whistle that calls the enormous bird Opodock and the magic hammer that can be used to call and command Himself the Elf.

While the hammer was used by a witch named Wunchie, it’s revealed in Atticus Gannaway’s Silver Sorceress that she actually stole it from the titular sorceress, whose name is Sonora. Although Himself introduces himself to Handy Mandy by saying that he “must do whatever you ask me to,” he appears to have a certain amount of autonomy in obeying commands. He reveals that, when Wunchie ordered him to “tap off” Boz, the Royal Ox of Keretaria (better known as Nox), he just stunned the animal and put magic into his horns so he would be able to rescue his master. To be fair, we don’t know the exact wording Wunchie used. Melody Grandy uses the idea that Himself has a good deal of freedom in interpreting his orders in her Disenchanted Princess, when Wunchie tells the elf to take Amadin to “the worst place under the earth.” Himself admits that the country to which he takes Dinny isn’t actually the worst, and advises the boy on how to escape. According to his own testimony, the Hammer Elf lives in a tree stump when he isn’t running errands. There’s also the bell-pull in Torpedo Town that forces Torpedodo to obey the ringer.

Speaking of bells, Thompson’s most famous example of this type is probably Ginger, Jinnicky‘s magical bellboy. He’ll appear whenever anyone rings the Red Jinn’s silver dinner bell, provide a meal, and then vanish. There are actually two such bells, so I’m not sure what happens if both are rung at the same time.

Ginger is a small black man who wears a turban, and is referred to as a slave from his very first appearance. In some later books, he’s called a bellboy instead. I said a little bit more about that topic in last week’s Oz post. When Jack Pumpkinhead and Peter Brown ring the bell multiple times in a row to use the food and dishes as weapons against the Scares, he brings only a bowl of soup the fifth time, because “five dinners in less than five minutes was too much for even a magic dinner bell.” We also find out that anyone who touches Ginger disappears with him, turning up at the Jinn’s castle. When Baron Mogodore’s guards Biggen and Little try to grab the bellboy, they end up working for him, but aren’t seen in later books. They presumably shrink down along with the rest of the Reddies, but whether or not Jinnicky sends them back to Baffleburg is never stated. Ginger apparently never speaks when summoned, but does when he’s at home. As we learn in Silver Princess, the only way the bell won’t work is if the servitor is trapped inside a drum.

This book also has Ginger bring magically refilling bowls of nuts and vegetables for Kabumpo, even though the elephant has to forage for food in Purple Prince. Apparently the magic was improved somewhat in the intervening years. Jinnicky seems to have developed somewhat of a code by the time of Yankee, as he rings the bell three times when he wants Ginger to bring dinner, and six for the bellboy to take Princess Doffi. There’s also a brief reference to his taking back empty trays, even though Jack Pumpkinhead makes clear that the trays disappear as soon as all the food is eaten. The trays are at least sometimes decorated with shrinking violets, which temporarily cause the Iffin to shrink when he eats them. According to J.L. Bell’s story “Dearest Mother,” Ginger was an ore crusher before Jinnicky bound him to the bell. Adam Nicolai’s “Gludwig and the Red Hair” introduces his big brother (much bigger, in fact) Pepper, who is bound to an enormous bell.