If I Only Had a Brain Surgeon

Although I don’t think he’s licensed, the Wizard of Oz seems to have an urge to mess around with brains. This is mostly, but not entirely, with artificial constructs. One of the first things we see him doing is giving the Scarecrow a brain made of bran mixed with pins and needles, which doesn’t actually make the straw man smarter, but makes him think he is. In The Emerald City of Oz, he explains that he gave the Sawhorse sawdust brains made from knotted wood when he was fitting the steed with new ears. 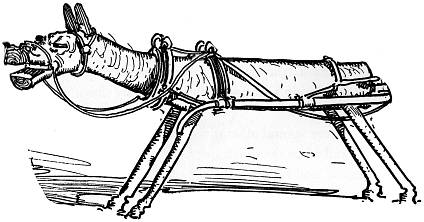 The Wizard does have some genuine magic powers by this point, so whether these brains actually work or just have a psychosomatic effect isn’t as clear as it was with the Scarecrow. In both of these cases, however, the brain-making was voluntary. It’s different with the Glass Cat in Patchwork Girl. Her brains made of pink stones contribute to her vanity, so he turns them transparent so she’ll be more humble.

I’m not sure how he would have changed them without having to break and reseal Bungle’s head, but maybe there’s a sort of magic that allows for that sort of thing. Another possibility I’ve seen suggested is that the Wizard didn’t actually change the stones themselves, just their color. The cat did earlier suggest that Dr. Pipt replace her brains with pebbles so she could be more content with her lot in life, but there’s no indication that she says the same to the Wizard. Regardless, by the time we see her again in Magic, she has the pink brains and haughty attitude back again. David Hulan’s “A Bungled Kidnapping” claims that this was a reward for thwarting Jommy Zelv’s attempt to capture Ozma. In Greg Gick’s Bungle and the Magic Lantern, we’re given the more humorous suggestion that replacing the feline’s brains makes her act erratically, like trying to drown herself in a bowl of lima beans and spraying bubble bath on people from the top of a tree.

In Pirates, the Wizard promises to replace Clocker‘s bad works with good ones, but since we never see the character again after this, we don’t know how well it worked. Then, in Wonder City, he removes Jenny Jump‘s anger, envy, and ambition with a magical extractor, making these traits visible and saying he’ll give them to the Wogglebug and his students to study. Since his attempt to replace Bungle’s brains was apparently a failure, I have to wonder why he tries to do the same basic thing with more organic beings.

According to the published version of John R. Neill’s Runaway, edited by Eric Shanower, the Wizard eventually gives the lobotomized personality traits back to Jenny. In the original publication of Shanower’s “The Final Fate of the Frogman,” in the 1990 Oziana, it’s learning about this operation and telling the Wizard that he thinks it’s wrong that leads the Frogman to leave the Emerald City. Presumably for copyright reasons, the publication of this story in the Salt Sorcerer anthology changes this to Bungle’s pink brains. It’s a clever substitution, but I still see the Oziana take as the accurate one, as the cat has the pink brains back by the time of Magic, and the Frogman is still in the Emerald City in Glinda. Hopefully the Wizard has gotten over his penchant for brain-altering, but we don’t really know. After all, this IS a land where removing someone’s memory is considered to be a compassionate punishment.

3 Responses to If I Only Had a Brain Surgeon