Reading About Adventures, Rather Than Having Them

Wish You Were Here, by Tom Holt – Somewhat unusually for a Holt book, this one is set in America, specifically Lake Chicopee in Iowa. (There’s a lake of that name is Massachusetts, but not really in Iowa, as far as I can tell.) Anyone who jumps or falls into the lake is granted their heart’s desire at the time, which can be pretty ridiculous at times, like the unscrupulous lawyer who just wants his car keys back. An English fantasy geek who wants a grand adventure, a woman who wants to be attractive, and a tabloid reporter in search of an exciting and convoluted story also end up in the magical world on the other side of the lake, where the Native American lake spirit guides them through a strange adventure. It also appears that the spirit doesn’t have much of a budget, so a lot of the people who had previously fallen into the lake have to play multiple roles, including Vikings and Cherokee warriors. Also involved are talking bears and a band of fairy-like thieves. The customers keep wandering in and out of each others’ spirit quests, and the whole thing is amusingly ridiculous, but also feels kind of pointless. Holt’s comic fantasies often end with a relatively happy ending, even as they suggest there’s no way to overcome much of the world’s corruptness and greed. That really isn’t the case here. Still, it’s a pretty good read, including much of Holt’s typical parody and satire. 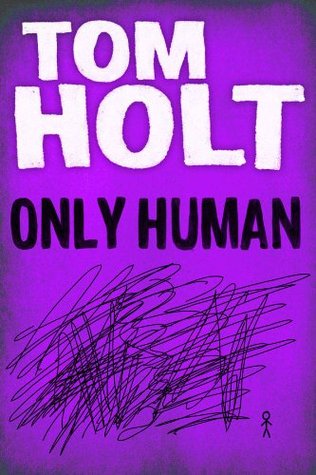 Only Human, by Tom Holt – Recurring themes in Holt’s books include musings on what it is to be human, and fantasy and mythology being reinterpreted in more modern contexts. This time, we learn that God Himself owns a computer manufactured by a major corporation. When He and Jesus go on a fishing trip, His younger son Kevin messes around with the computer and causes several people to switch minds with other things. And it’s not just living things, but a machine in a factory and a painting are also in play. The Prime Minister has his brain swapped with that of a lemming, and a demon in the finance department of Hell unwittingly possesses a vicar. As they deal with the problems that arise from such abrupt shifts, a contingent of demons has a plan to make better-quality humans to sell to the deities of other planets. What’s more, an alien has come to visit the Earth, and a tech support representative has to figure out how heavenly computers operate. It gets pretty complicated at times, but it develops its plot and themes pretty well.

The Twenty-One Balloons, by William Pène du Bois – I might have mentioned before that there was an anthology of children’s literature at my grandmother’s house, including excerpts from various books. It’s where I first learned about My Friend Mr Leakey, as well as this one, the adventures of a professor from San Francisco turned balloonist. Crossing the Pacific Ocean, he ends up on the tropical island of Krakatoa shortly before it explodes. Here he finds a colony of twenty families who each own their own restaurant that serves a different sort of cuisine, all organized according to the alphabet. One serves American food, the next British, then Chinese, Dutch, and so on. It’s also home to several interesting inventions. Overall, I found it charming, funny and rather quaint, sort of like the idea of a balloon flight around the world. I didn’t think I’d read anything else by Pène du Bois, but looking at a list of his titles, a picture book called Bear Circus sounds familiar. If so, I think I read it when I was five.

Bulfinch’s Mythology: The Age of Fable, or Stories of Gods and Heroes, by Thomas Bulfinch – Published in 1867, soon after the author’s death, I know I read at least part of this volume when I was a kid. It’s not the most thorough overview of Greco-Roman mythology, but it presents the stories in an accessible and enjoyable format. In addition, there are bits of poems and literature that reference these tales. It is somewhat oddly organized, as it’s mostly about Greek and Roman mythology (Bulfinch does explain some of the differences between the two, but mostly ignores them and calls the gods by their Latin names); but then towards the end quickly works in brief overviews of Egyptian, Zoroastrian, Hindu, Norse, and Celtic myths and religious practices. Bulfinch takes a bit of a condescending attitude toward some of these religions, but perhaps that’s to be expected of a work from the time period. Along the same lines, the author expurgates a lot of the more explicit material in the myths, some of which was pretty important to the way they progressed. Fortunately, we now have a lot of other sources for the sexual escapades of the gods and heroes. And since it was free on Kindle, I can’t complain too much.

2 Responses to Reading About Adventures, Rather Than Having Them