When I first came across the term “riddles,” it was most likely referring to what you find in kids’ joke books, specifically puns or other simple jokes presented in question-and-answer format. You know, the “When is a door not a door?” variety. Later, with materials like Beatrix Potter’s Tale of Squirrel Nutkin, the story of Oedipus and the Sphinx, and of course The Hobbit, I learned more about riddles that weren’t necessarily supposed to be funny (although sometimes they were), but were more about common items described in metaphors, often in rhyme.

The idea of having to solve a riddle in order to achieve a goal is an old one, as are many of the riddles themselves. What I have to wonder is how often anyone actually solved them without some sort of prior knowledge. For instance, if you go by the common supposition that “Humpty Dumpty” was originally a riddle, what indication does it really give you that it’s referring to an egg? Aren’t there many things that can’t be easily reassembled after falling off a wall? Was it common to place eggs on walls when the poem was written? The impression I get is that the main hint was that “Humpty Dumpty” was used to refer to a short and clumsy person, perhaps someone who looked somewhat like an egg. I’m sure many other riddles of this sort relied on cultural allusions that are now obsolete. Come to think of it, I haven’t really heard many people describe a slightly open door as “ajar” in my day-to-day life. J.R.R. Tolkien said he made up most the riddles that Bilbo Baggins and Gollum told each other, and some of them do seem to contain somewhat old-fashioned keywords, like a mountain having “roots” or the use of the word “champ” in the one about teeth. For the most part, though, I think they require that you think in the same manner as the riddle’s creator. I remember when the Riddler would show up on Batman: The Animated Series, and Batman would immediately solve all of his convoluted riddles. I know he’s the world’s greatest detective, but some of them were incredibly complicated in ways that pretty much required the solver to follow Nigma’s thought processes exactly. 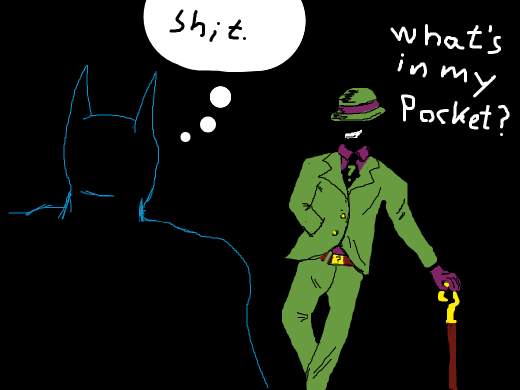 I guess what I’m trying to say is that Gollum probably would have eaten me. I like to think I’m pretty good with puns, though.

Along somewhat of the same lines are brainteasers of the Minute Mystery variety, which came to mind because Michael Showalter joked about them in his book. I remember hearing some of these in elementary school, but I don’t think I was ever good at guessing them. And really, how could anyone possibly figure out some of them? Like, okay, the one about the hanging man and the puddle of water is pretty easy, but is ANYONE going to come up with the elaborate story about the man committing suicide after eating albatross unless they’ve heard the puzzle before? Then there are the riddles that rely on misdirection, like asking whether a pound of feathers or a pound of steel weighs more, or how many eggs a rooster laid. The traditional answer to the St Ives rhyme, which dates back to around 1730, is also like this. Sesame Street provided the correct answer as to how many were going the other way: 2801.

I’m not sure why the sacks would count, though, unless they’re like the Bag O’ Laughs from Dragon Quest.

Another one I remember from my school days was, “A plane crashes between the United States and Canada. Where do you bury the survivors?” The official answer is that you don’t bury survivors, but maybe they were buried alive so they couldn’t reveal that the pilot crashed on purpose. Also, unless the plane explodes or something else that would necessitate immediate burial, wouldn’t the dead people be sent back to their families? In high school, I saw the puzzle about the three words ending in “-gry,” to which the answer varies depending on the exact wording, but it’s never actually a word ending in “-gry.” Feels like a bit of a cheat to me, but I get the impression that puzzles like these are specifically meant to make people who are good at logic puzzles and obscure trivia feel stupid because they overthink it. And I AM someone who likes logic puzzles and obscure trivia and often misses the obvious.

3 Responses to Riddle Me This