How Fast Those Queens Can Run! 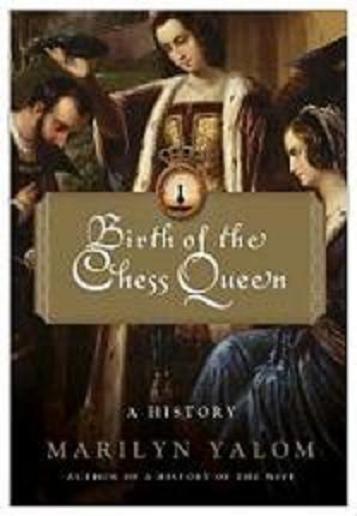 Birth of the Chess Queen: A History, by Marilyn Yalom – The author links the development of the queen in the game of chess to events and personages in history. In the earliest Indian and Arabian sets, the piece next to the king was the vizier, and he could only move one space at a time. When this piece became the queen in Europe, it still had this limited movement. It was only later that she became the most powerful piece on the board, and Yalom suggests this might have had to do with the power of certain queens. While there isn’t much direct evidence for this influence, the author makes a pretty good case. With the additional abilities of the queen (and the bishop as well), games could be played much more quickly, and chess became more of a competitive sport than a leisurely activity. This actually led to it being viewed as more of a man’s game, whereas before games between men and women were common enough to feature in folklore, and playing chess was part of courtship. So, while the women came to dominate the board, there weren’t as many women moving the pieces. Not that there aren’t women who play competitive chess (the book mentions the Polgar Sisters), but we know that game competitions have become somewhat of a boys’ club. Some writers actually commented on how a pawn becoming a queen amounted to a sex change, as pawns were regarded as soldiers. Lewis Carroll avoided this, as Alice was not only a female pawn who became a queen, but she was taking the place of another female pawn, the White Queen’s daughter Lily. Apparently some older games only allowed for the promotion of a pawn if the original queen was out of play, but under modern rules there can technically be up to nine queens in the game, although I doubt that’s ever happened in normal gameplay. There were also pictures of chess pieces throughout the ages, including both representative ones and others that actually looked like people.

Like Loading...
This entry was posted in Authors, Board Games, Book Reviews, Chess, Games, History, Lewis Carroll and tagged birth of the chess queen, marilyn yalom. Bookmark the permalink.