Erlik to Bed, Erlik to Rise

I can’t say I’ve ever come across that much from what Is known as Altaic mythology, which encompasses the beliefs of people from Turkey, Mongolia, and Siberia. Some of it seems to have spread into Finland as well.

The evil god in this pantheon was known as Erlik, who was made by a good creator figure called Ulgan. When the creator saw a mud puddle with human features (which I guess were somewhat like godly features), he made Erlik out of it. While Erlik was sometimes said to have assisted Ulgan with the creation of humanity, he eventually rebelled against the creator and was banished to the underworld. He resembles Satan or Lucifer much more than the rulers of the dead in other pantheons, possibly due to influence from Judaism and Christianity. I’ve seen it proposed that Erlik might have been a pre-existing god who wasn’t so evil, but later came to fill the role of the Devil character. He’s the originator of sin, a collector of human souls, the corrupter of shamans, and the father of eighteen children associated with various evils. Actually, I’m not sure ALL of his kids are bad, as one is the patron of bravery and another of mining, although those could be considered evils depending on your viewpoint. Erlik rules over death while Ulgan rules life, a duality possibly inspired by Zoroastrianism.

In one myth, Ulgan sends Erlik to dive into the primordial waters looking for earth, which Erlik brings up and Ulgan turns into the land. Erlik hides some earth in his mouth so he can create his own land, but it expands, and he’s forced to spit it out. This is the explanation for where wetlands originated. Ulgan goes on to create more people, the eighth of which is named Maidere, and is the messenger between heaven and earth, charged with teaching godly ways to humanity. I suspect there might be a link between him and Enoch, seventh of the antediluvian patriarchs, who was also a spiritual teacher endowed with heavenly wisdom, and credited as the inventor of writing and other arts. Enmendurana, seventh on the Sumerian King List, also had some similar traits. His name also links him with Maitreya, the future savior of the world in Buddhism.

Anyway, Maidere was charged with creating the first woman, but since he couldn’t bring her to life, he went to seek assistance from heaven. He left a guard dog behind with his lifeless woman, and Erlik bribed the dog with a fur coat in order to see Maidere’s creation. He brought the woman to life by playing music, and she ended up with a soul, but also “seven tempers and nine moods,” one for each note played. A similar but less misogynistic story has Maidere making people but not necessarily women specifically, and Erlik spitting on them. Maidere then turned them inside out, because he’s the kind of guy who would sweep dirt under the carpet instead of throwing it away, which is why people have fluids inside their bodies. Either way, the dog was punished by being made subservient to humans, although I don’t think dachshunds got the memo. Later, Erlik killed Maidere as well.

Physically, Erlik is described as a muscular old man with black eyes and a black mustache.

Picture by Serdar Ozcicek
He is also sometimes said to have the face of a pig, and to take the form of a bear.

His experience with diving to bring back earth also links him to birds. And as we all know, the Erlik bird catches the worm. I’ve seen several pictures online of him riding a bull, but I don’t know the origin of the steed.

Picture by Evren Veral
The dinosaur Erlikosaurus was named after him, although I can’t say I really know why.

In the Conan stories, Erlik is the main god worshipped by the Hyrkanians, the mythical ancestors of the Turks, Tatars, and Mongols. 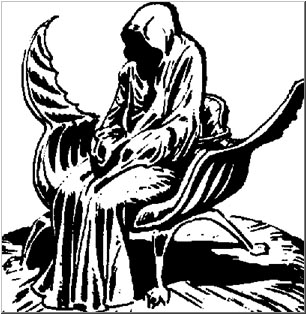