I’ve now finished with Tom Holt’s series of books centered around J.W. Wells and Company, the magical firm from Gilbert and Sullivan’s The Sorcerer. I had previously read The Portable Door, In Your Dreams, and The Better Mousetrap. The first three books in the series center around Paul Carpenter, a man who comes to work for the magic company without even knowing what they do; while the others have different protagonists.

Earth, Air, Fire and Custard – This wraps up the story of Paul Carpenter, the hero of the first two books in the series. Like most of Holt’s protagonists, he’s a hapless everyman who gets caught up in bizarre adventures, and eventually finds out he’s part goblin. Here, he learns that he’s also undead, and was involved in a Viking duel a millennium before he was born. It’s a pretty convoluted story, and since monster slayer Ricky Wurmtoter turns out to be a centuries-old king, I’m not sure how he had a living sister in the previous volume. Maybe that was explained somewhere, but I don’t remember. Paul spends some time working for a newcomer to J.W. Wells, a small man who sends him on strange errands and mysteriously turns up at various locations. Also, his refrigerator starts talking to him, he attends his own funeral, and he has to stop one of the firm’s partners from destroying the world in a plot to make Canada into a financial power. The title refers to how this sorcerer invented a fifth element, basically but not exactly like custard, by going back in time and stealing Audhumbla, the Great Cow of Heaven from Norse mythology. There’s a similar joke in Rick Riordan’s The Red Pyramid, except there the fifth element is cheese. 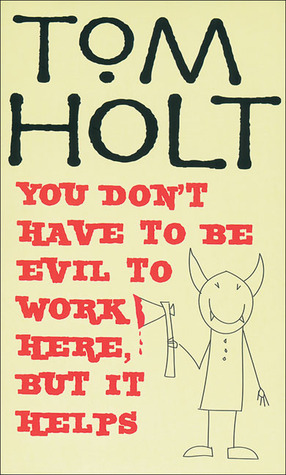 You Don’t Have to Be Evil to Work Here, But It Helps – The first of the J.W. Wells series in which Paul does not appear, although he is mentioned a few times. Instead, we have another fairly normal, awkward, well-meaning guy who ends up involved in a magical plot that’s closer to him than he realizes. Colin Hollingshead is the son and employee of an overbearing man who runs a manufacturing concern, and is selling his soul to the Devil in order to keep it financially solvent, with the contract being written up by JWW. There’s also a tree growing inside his house, and he is showing all the signs of being in love with a JWW employee for whom he has no actual feelings. He eventually learns of his place in a conspiracy involving star-crossed lovers across different reincarnations and a fruit that grants immortality. There’s also a subplot about the firm getting new owners who make the workers defend their own jobs, much like Office Space. Colin is likeable enough, but neither of his love interests are particularly well characterized. Oscar, the demon representative assigned to the soul-selling case, is pretty fun, although Holt had friendly agents of evil in earlier stories. I also found it a bit odd that Holt decided not to go with the idea of Rosie Tanner, the shape-shifting goblin receptionist, becoming a partner in the firm, as hinted at the end of the last book. She still plays a part, but it’s a much less significant one than in the earlier ones.

May Contain Traces of Magic – The protagonist of this one works for JWW, but since he’s a traveling salesman, he deals exclusively with the retail wing and never interacts with the familiar characters. The events of the earlier books are referenced, but usually just in rumors. There do appear to be a lot more magical retail outlets in England than the other JWW books suggest, one of them run by Odin, whose circumstances are once again different than in his earlier Holt appearances. Chris Popham is in a committed but unsuccessful relationship with a woman he knew from school, but still has feelings for a mutual friend of theirs, and is developing a crush on his navigation system as well. When he starts encountering demons who feed on human emotion, he seeks help from his friend and her demon-hunting organization. Soon, it seems like practically everyone in his life might be a demon, or at least some sort of supernatural entity, in disguise. After a lot of red herrings and a few trips back in time by way of being pushed down toilets, Chris finally figures out what’s going on. Not that it makes that much sense even once the mysteries are solved, but that’s a Holt book for you.

I believe there’s only one more of Holt’s comic fantasies I have left to read, and I’ve already started it. I still haven’t checked out any of his historical fiction, or the stuff he wrote as K.J. Parker.

Like Loading...
This entry was posted in Authors, Book Reviews, Humor, Magic, Mythology, Norse, Tom Holt and tagged audhumbla, demons, earth air fire and custard, gilbert and sullivan, goblins, may contain traces of magic, odin, paul carpenter, you don't have to be evil to work here but it helps. Bookmark the permalink.