How Is Education Supposed to Make Me Feel Smarter?

As I’ve said before, the Oz books don’t say a whole lot on education in the fairyland. When the Wogglebug, who becomes educated by listening to the lectures at a country schoolhouse, is given the post of Public Educator by Ozma, he sets up a college that the ruler describes as “an excellent place” for “youths who do not like to work.” Later, we learn that the students there spend most of their time playing sports, with their lessons provided in pill form. The Education Pills, which are described as sugar-coated to make them easier to swallow, are generally taken a few times a day, which provides the students with the equivalent of studying various subjects. Their invention is credited to the Wizard of Oz in The Emerald City of Oz, but to the Wogglebug himself in Magic. I have to wonder whether their effect is equal on anyone who takes them, or some minds are better at absorbing certain subjects even in pill form. The Wizard describes how one of Billina’s chicks swallowed an elocution pill, and immediately recites several poems flawlessly.

It’s also never clear whether these pills are distributed throughout Oz or only available at the college itself. 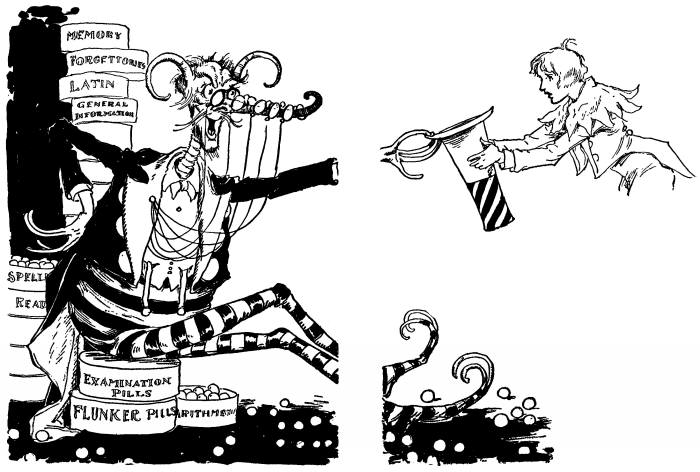 The Wise Donkey of Mo becomes educated by eating textbooks, but I don’t know that that method would be practical for anyone else.

The Ozian college students are all young men in Baum’s books, but John R. Neill makes the school co-educational. In Runaway, a student named Alexample is only twelve years old, but this is considered unusual even in Oz.

But then, Oz has a lot of physical children who have actually lived many years. I assume a child who remains ten isn’t stuck in grade school forever, because that would suck all the fun out of not aging. But do they graduate, or just stop after a few years? Perhaps the reason there aren’t very many children attending the Wogglebug’s college is that the focus on athletics makes an adult body preferable.

I don’t know if Oz has an accredited degree system like there is in the United States. The educated insect gives himself the qualification “Thoroughly Educated,” and no one seems to argue with him. He later becomes a professor, and his old mentor is Professor Nowitall.

Grunter Swyne is identified as a Professor of Professor of Cabbage Culture and Corn Perfection, but we’re not told what faculty he’s on, or how he obtained that title.

There’s no indication that Herby had to get a medical degree before being declared Court Physician. And does Dr. Pipt actually have a doctorate in anything?

Actually, magic schools are an interesting topic in and of themselves. We’re told in Gnome King that Wumbo the Wonder Worker “had studied in the best schools of sorcery.” Randy Hoffman’s Mixed Magic Makes Misery describes an Oz several centuries in the past having several universities of magic started by jinn who want to keep the magic-workers of the country in line. Since Ozma has outlawed magic for all but a few individuals, she presumably shut down any such schools that still existed in her time. A story of my own has both the Wizard of Oz and the Nome King attending a university in Ev that in my original draft was just for studying magic, but I later switched it to a place that teaches magic in addition to other subjects. I seem to recall that was also the case with the finishing school that Elphaba and Glinda attended in Wicked, although that has no bearing on Oz as it’s presented in the main series. A lot of Ozian magic-users appear to have been privately taught; we’re told in Melody Grandy’s Tippetarius that the Wizard Wam taught magic to pretty much anyone who would ask, regardless of their intentions. Glinda learned from him, but also figured out a lot on her own. Tip states in Land that Mombi never went to school, but he presumably wouldn’t have any way of knowing for sure. I do think it’s more likely that she learned witchcraft either from another witch or through independent study, though; she doesn’t strike me as the classically educated sort. The magic school we see in Marcus Mebes and Chris Dulabone’s Magic Tapestry, which all of the future good and wicked witches of Oz attend, seems unlikely to me.