I usually try to keep my Sims living as long as possible. I mean, I made the effort in creating them, after all. The Sims games all include ways to cheat death, although they’re not all equally effective. In the first Sims, the characters never age, with the exception of babies growing to childhood in three days. After that, the kids remain kids, and are forced to remain in school as long as they live. Characters can die by accident or player maliciousness, being vulnerable to fire, electrocution, starvation, or drowning. I once saw a rumor that Sims could spontaneously combust, but that it was incredibly rare. It’s not all that difficult to avoid these things once you’ve gotten used to the game, and even if someone does bite the dust, saving often will allow you to go back and fix that. Starting with the Livin’ Large expansion pack, it’s also possible to bargain with the Grim Reaper. 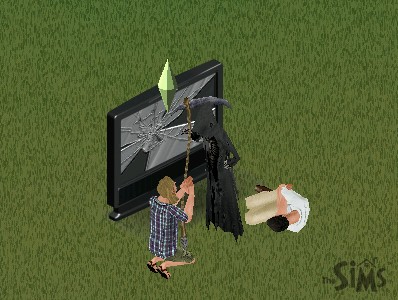 Sims 2 introduces aging, but it only happens in the active household. Eventually, even if a Sim survives everything else, they will die of old age. In fact, a Sim’s lifespan is a set number of days. When I played, I soon learned about the Elixir of Life, a green liquid in a water cooler that reverses aging. That is to say it will increase a Sim’s current life stage by a few days with each drink.

If you use it when the Sim’s aspiration meter is in the negative zone, however, they’ll age a few days. They can’t switch between life stages, though; an adult will never go back to being a teenager. Between this and non-active households not aging, you can end up with parents who are younger than their offspring. Since the elixir is readily available in the game, I don’t really view it as cheating. Part of me thinks I should just let the Sims live out their normal life cycles, and I sometimes do (especially with ones I didn’t create myself), but the allotted time isn’t always enough to achieve everything I want a Sim to do. At least there’s something you can do about that, unlike in real life.

In Sims 3, death is pretty cheap, as you can bring back ghosts as playable characters with certain items. 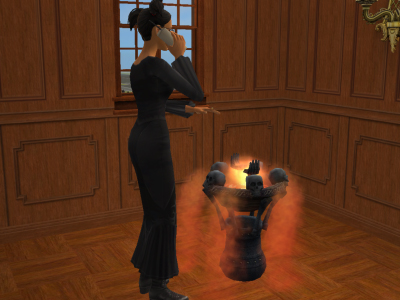 To avoid death in the first place is a little trickier, though. You can cook ambrosia that both returns a Sim to the beginning of their particular life stage and revives the dead, but you need high cooking skill and rare ingredients.

One of these ingredients is life fruit, which on its own makes a Sim one day younger. The Generations expansion introduces a potion that can freeze a character’s current age, and another that you can make with a chemistry set to restore a Sim’s youth. This one actually can change life states, as an adult or elder who drinks it will become a young adult again. They even graduate from high school yet again, even if they already have a college degree from the University expansion. I’ve had dreams like that before. I wonder if it’s a bug in the program. The Supernatural expansion brings in alchemy, which will let you make an elixir with the same effect.

A death flower can be exchanged to the Reaper for a Sim’s life, making it sort of like the Stone of Life in the Dragon Quest series.

When one of my characters in Sims 4 reached old age, I tried the Potion of Youth that you can get as a reward for fulfilling whims, and was disappointed to learn that it only took him back to the beginning of that life stage. Some potion of youth! I was hoping it would work like the Sims 3 one that makes a Sim a young adult again, but I guess that WAS only available with an expansion pack. I understand the Get to Work expansion introduces a science career that allows you to make potions with the same effect, and the milk of a cow plant works the same way. The plant will only produce this milk if it kills another Sim, however, so it’s like trading one person’s life energy for another’s.

Ambrosia is also back, but the potion of youth is the only one I’ve come across so far. I did choose a long lifespan on the options menu, but I don’t think that’s as long as the longest in Sims 3.