Barking, by Tom Holt – This was the last of Holt’s comic fantasies that I had to read, and it’s pretty typical of him in many ways. The main protagonist is a lawyer who, when fired from his firm, joins up with his old friends from school whom he’d tried to get away from. They’ve all become werewolves, which makes them really good lawyers, and gives them canine habits. The description of their office sounds like kind of a parody of free work spaces, as the employees are allowed to take naps and chew on furniture as much as they want as long as they do their work. The protagonist gets entangled in a plot involving a rival firm of vampires that employs his ex-wife, a shape-shifter who creates zombies and sometimes takes the form of a unicorn, and a set of figures that just won’t balance. It wasn’t one of my favorite Holt yarns, but it was an amusing take on legends of the undead. 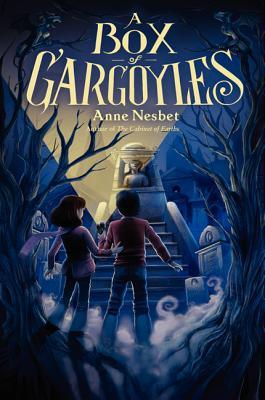 The Cabinet of Earths and A Box of Gargoyles, by Anne Nesbet – A thirteen-year-old California girl named Maya has relocated to Paris with her family, and has a hard time fitting in and learning to converse in French. What’s more, she learns of her relation to famous scientists who dabbled in magic, creating a way to remove the life force from people in order to keep others eternally young. With her forgettable cousin Louise and her Bulgarian friend Valko, she has to avoid her own desire to use the magic to heal her mother, and to save her charismatic little brother James. Some elements of the story, like the scientists from the past and some of the places visited, are based in reality, although the story itself is obviously not. In the sequel, the villain of the first book has found a way to return to life, and is using magic to force Maya to help him. Chaotic events that happen on a schedule result in gargoyles appearing and disappearing, ordinary people turning into Bulgarian vampires, and the Eiffel Tower growing roots. What’s more, Valko’s grandmother wants him to return to Bulgaria to live. 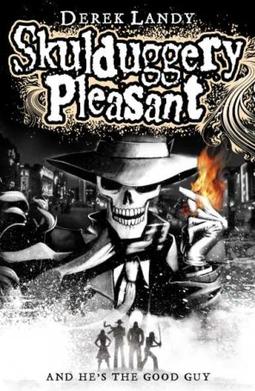 Skulduggery Pleasant, by Derek Landy – The author has actually written eight books in the series, but the library only had the first three. The first one was originally just called Skulduggery Pleasant, but was renamed to Scepter of the Ancients after it became an ongoing story. The second and third are Playing with Fire and The Faceless Ones. The plot crosses into a few different genres, including mystery, fantasy, horror, and espionage. Actually, it bears some similarity to the Nesbet books I just reviewed, in that it involves a teenage girl learning about a magical world hidden within the ordinary one. It takes place in Ireland instead of France, however. When Stephanie Edgley’s uncle dies, she partners with his old friend, the skeletal detective Skulduggery. He’s a fun character who’s quite proud, generally with good reason. The skeleton is part of a hidden world in which magic is real and various alliances are battling against each other. Some evil sorcerers are determined to bring back the Faceless Ones, old chaotic gods in the Lovecraftian vein. Skulduggery is initially working with the Sanctuary, a parliament of sorcerers, but he breaks ranks with them when he learns of corruption among the organization’s leaders.

The Moons of Meer, by Warren Hollister and Judith Pike – The co-authors of this children’s fantasy novel were both members of the International Wizard of Oz Club, and Hollister also wrote one of my college history textbooks. The children Charlie and Ellen are transported from Arizona to the fantastic land of Meer, which has two moons in its sky and a good deal of magic. They make friends with a hermit and a minstrel and set out to defeat the Scarlet Sorceress who has deposed the old king, only to arrive when she herself is being deposed by one of her lords, forcing them to team up. Meer also has a dragon who shrinks at night and friendly dog-like creatures known as karfs. While not directly related to Oz, there were elements that reminded me of that fairyland. The sorceress waking her dragon by pulling on a cord around his neck, for instance, is exactly what Polychrome did with Quox in Tik-Tok of Oz. Joe Bongiorno has suggested that Meerth in Marcus Mebes’ Oz books was inspired by Meer, which is possible although I don’t know of any direct connections, and Meerth is also another name for Meerut in India.