I’ve been led to understand that the newest Teenage Mutant Ninja Turtles movie features appearances from several characters introduced in the 1987 cartoon series, including Bebop, Rocksteady, and Krang. I’ll probably watch it at some point, but I can’t say the original reboot film looked at all good, so neither one is that high priority for me. I have, however, taken an interest in some of the Krang-related media I’ve come across recently, including Cracked’s tongue-in-cheek theory that he and Mother Brain from Metroid are the same and a video speculating on what his original body looked like.

I’ve come across other discussions of this same sort for me, and it was something I always wondered back when I watched the cartoon. The character is a pink alien brain from Dimension X, who has a face and tentacles, and is able to talk. He teams up with Shredder, and some fans have compared their relationship to that of a bickering married couple.

Picture source: The Rubber Chicken
The brain provides the ninja with incredibly advanced technology in exchange for building a new body for him. Yes, he apparently had a body at one point, but lost it when banished from his home dimension. As mentioned in the video, General Traag immediately recognizes Krang, yet wonders what happened to his body. So he can recognize his old leader from his brain? That’s quite a feat! What his original body might have looked like is pretty much ignored until the seventh season. In the episode “Invasion of the Krangazoids,” Krang clones himself, and while his clones start out as brains like him they eventually grow lizard-like bodies. 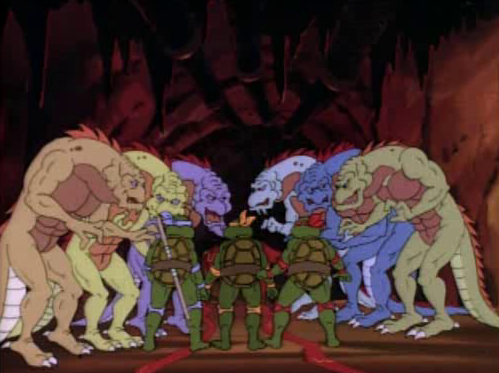 Donatello suspects that this was in their DNA, although it doesn’t explain why Krang himself can’t regrow his old body. So was Krang originally a lizard monster? The episode hints at this, yet seems to go out of its way never to have Krang officially confirm this. The video speculates that the monsters were an earlier evolutionary form of Krang’s species. Another possibility that I thought of is that Krang did a body like that, but his brain was also capable of functioning independently, hence Traag recognizing him in that form. Apparently one of the comic series (not the original one) made him able to attach himself to other living things in order to control them.

The inspiration for Krang came from Kevin Eastman and Peter Laird’s comics, in which the creators of the substance that mutated the Turtles were aliens known as Utroms. They were also alien brains, but that’s just what they were; there was no indication that they had ever had bodies. They do, however, ride around in android bodies, like Krang does in the cartoons.

So maybe the earlier body Krang was referring to was also an android, which is why he doesn’t seem to have any particular problem accepting the giant robot in Speedos as his new body. The term “Utrom” was never used in the original cartoon series, but later incarnations that combined elements of the comic and the cartoon went ahead and made him one. I understand that, in the IDW Comics series, he’s the prince and sole survivor of his species, which was native to the planet Utrominon in Dimension X.

In the 2003 animated series, he led a group of rebel Utroms known as the Kraang.

I don’t know where the idea of a creature that’s nothing but a brain originated, although I would have to suspect such a species would be far too vulnerable to physical damage to remain in existence.

The leader of the titular aliens in the 1986 film Invaders from Mars has frequently been pointed out to look a lot like Krang.

This would have been before the cartoon series, but after the Utroms were introduced in the comic. The name might have come from an Atlantean warlord in Marvel Comics.

As for the connections to Mother Brain, I do have to wonder if the decision by the creators of Captain N: The Game Master to turn her from a simple brain in a jar that couldn’t actually attack to a hammy megalomaniac with tentacles who sometimes rode around on vehicles was at all inspired by Krang. They don’t look that much alike, but still. They also both boss around two totally incompetent lackeys, although that happened in pretty much every cartoon of that era.

I have to wonder if anyone has ever shipped MB and Krang. Okay, I guess someone has.

Do you think Shredder is jealous?

I did find the cartoon episode with Krang’s clones, which aired after I was no longer watching the series on a regular basis, but I have no idea how long it will remain up. EDIT: It isn’t now, but maybe it’s somewhere online. A few additional thoughts I had on it included:

1 Response to They’ll Need a Krang