The Dresden Dolls reunited for what I believe were only two shows, and I saw the one at the Coney Island Amphitheater. It’s a new venue, and one of the people who did booking decided the Dolls needed to play there. I can’t argue. I mean, how does punk cabaret not totally fit the Coney Island aesthetic? The full name is actually Ford Amphitheater at Coney Island Boardwalk, because apparently nobody realized the bad association with “Ford” being in the name of a theater. I was pretty far back, so my pictures didn’t turn out all that well, but I’m going to share some of them anyway.

Also, the people in front of me stood through a lot of the show, which meant I pretty much had to as well. There are always a lot of people dressed up for Dresden Dolls shows. I don’t, partially because I don’t think I own anything even remotely goth-looking. The set included a lot of stuff from both of their main albums (nothing from No, Virginia as far as I can recall), plus a new song about Amanda Palmer’s late best friend (and namesake of her son) Anthony, and “Leeds United” from her first solo album. They also played a few covers, including the Beastie Boys’ “(You Gotta) Fight for Your Right (to Party!)”, Black Sabbath’s “War Pigs,” and some Jacques Brel and Rage Against the Machine songs I didn’t know. Actually, I do remember hearing the Rage song once before, because it was background music for a group project I was in during my sophomore year of high school. The band included a bit of “Careless Whisper” in “Mandy Goes to Med School,” and mentioned Donald Trump in “Mrs. O.” For “Delilah,” Brian Viglione’s wife came on stage to sing backing vocals. I bought a T-shirt and some buttons after the show. I still don’t have the album Amanda did with her dad, but I did listen to a few other albums for the first time this week, so I’m going to economize and talk about them in this post.

The Minus 5, Of Monkees and Men – Scott McCaughey is known to be a big Monkees fan. He name-checked them on the liner notes for the collection of the first two Young Fresh Fellows album, and the first time I saw the Minus 5 live they performed “Circle Sky,” introducing it as being by “everybody’s favorite band.” He’s also written and played a lot of songs about other musicians. So it’s not too surprising that he’d do a tribute for the band’s fiftieth anniversary, although instead of just covering Monkees songs, this instead is a collection of songs ABOUT the Monkees, one for each of them and another for songwriters Tommy Boyce and Bobby Hart. Each one has an appropriate soun and theme to it. “Michael Nesmith” is an epic song about Mike’s career with a country sound. Davy’s song discusses his role as teen heartthrob. “Song for Peter Tork,” which begins with a story about meeting Peter, is kind of sad in its discussion of how he never really achieved success outside the Monkees, but points out that music is a labor of love for him. It has a folky sound with a banjo. The fun and defensive “Micky’s a Cool Drummer” begins with the drum opening from “Randy Scouse Git.” The remaining four songs are tributes to people unrelated to the Monkees: McCaughey’s frequent collaborator Jimmy Silva, actor Robert Ryan, Portland-based band Richmond Fontaine, and music expert John Weymer. The combination of organ and being about a somewhat obscure actor on “Robert Ryan Is Among Us” reminds me of the YFF song “Agar’s Revenge.” While looking for information on this album, I found that I missed another Minus 5 release, Dungeon Golds. I’ll have to check that out. 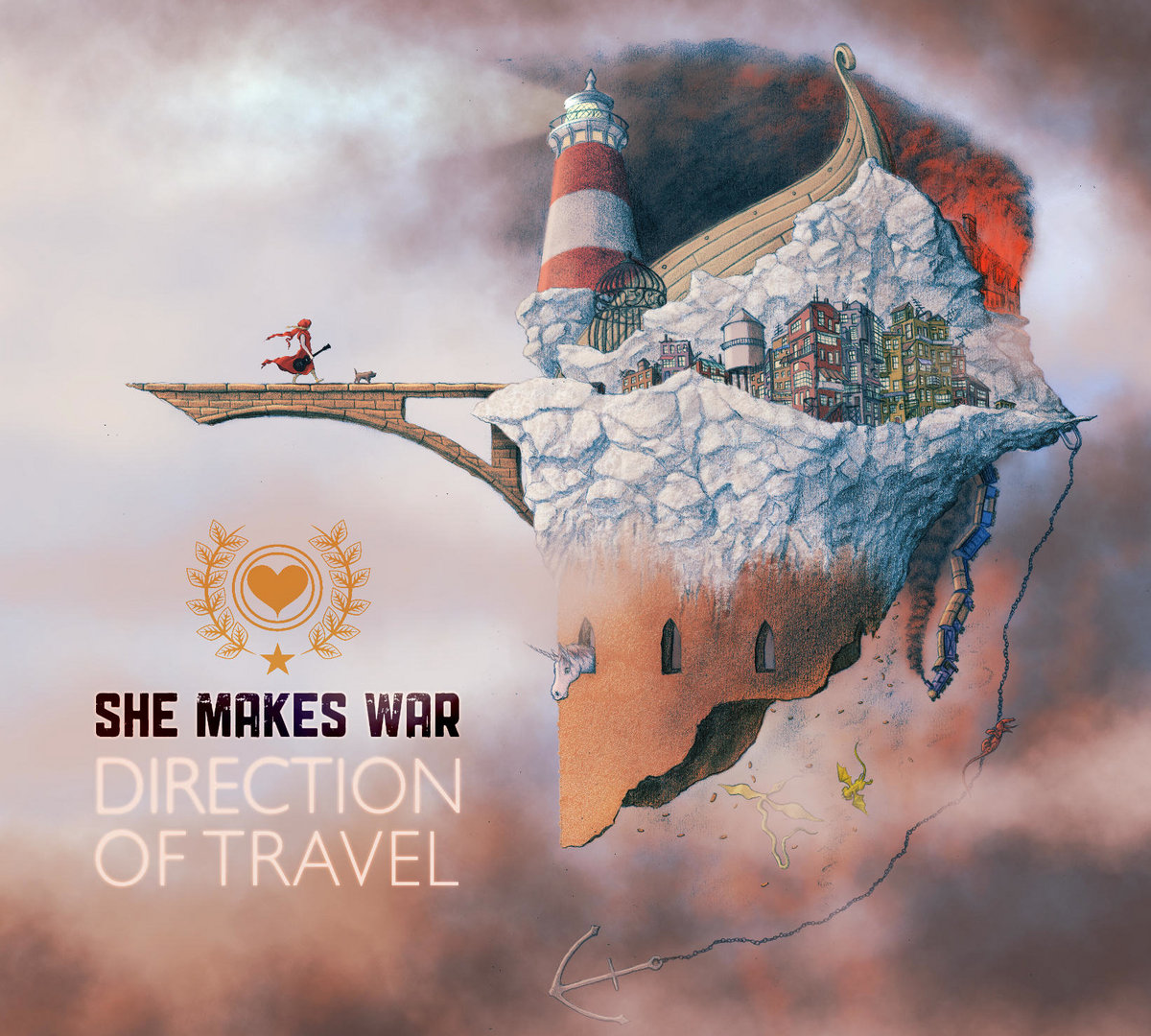 She Makes War, Direction of Travel – The band is mostly just Laura Kidd, who plays a lot of instruments, although there are some other performers involved. This is their third album, but I wasn’t aware of them before that. I came across Laura on Twitter, and decided I should probably check out her music. It’s been described as “gloom-pop,” which seems appropriate, but that doesn’t mean it isn’t enjoyable to listen to. She has a good voice that fits the songs, and plays guitar, bass, keyboards, and ukulele. “Cold Shoulder” is a song that I found particularly catchy. “Paper Thin” is a quieter song with a nice uke part and guest vocals by Tanya Donnelly, which is appropriate as I can hear some Throwing Muses influence on the record. “5000 Miles” and “Turning to You” have psychedelic sounds to them, in the former case due largely to a string section. If you’re not sure from these kind of vague descriptions whether it’s something you’d be into, the entire album is streaming at Laura’s website. You can also get five free songs by signing up for her mailing list.

The Rutles – The soundtrack to the television special All You Need Is Cash includes what I think are all of the songs from it, parodying numbwes from throughout the Beatles’ career, all written by Neil Innes of Monty Python and Bonzo Dog Band fame. Some are direct spoofs that sound really close to the originals (“Get Up and Go” is almost an exact soundalike to “Get Back”; it apparently wasn’t included on the original LP due to worry about being sued), while others are a little more general. In a lot of them, the lyrics aren’t really jokey; the humor is just in how much they sound like Beatles songs, only not exactly. A few are a little sillier, and while I can’t say the lyrics to “Piggy in the Middle” are that much more bizarre than those of “I Am the Walrus,” the “Penny Lane” takeoff “Doubleback Alley” gets pretty vulgar. The line “if I flog my memory” definitely sounds like it would have been at home in a Bonzos song. And since “All You Need Is Love” starts with a bit of “La Marseillaise,” “Love Life” instead begins with the Battle Hymn of the Republic.