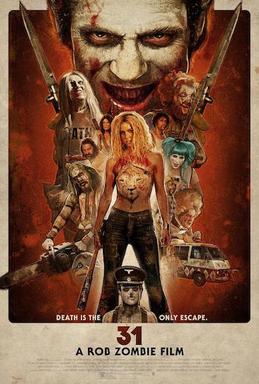 Last Thursday, Beth and I went with Stephanie and Jeff to see an early showing of Rob Zombie’s latest movie, 31. Beth has gone on record as being a Rob Zombie apologist; we’re not really that familiar with his music (although she has insisted that “Dragula” is our cat’s favorite song, which is very indicative of her rather absurd sense of humor), but we’ve seen all of his films, and she’s appreciated even the weaker ones. They’re incredibly brutal, really pushing the envelope in terms of the type and amount of violence they show even compared to other slasher films, but there’s also a distinctive style and an often awkward but memorable sense of humor to them. They also tend to feature rednecks, even in the Halloween films that take place in a quiet suburban town. The Lords of Salem was an exception to this, but 31 isn’t. Largely inspired by The Most Dangerous Game, it’s about a van of carnies captured at a roadblock in the middle of nowhere and taken to a bizarre mansion where the foppish Father Murder (played by Malcolm McDowell, who had also taken the role of Dr. Loomis in the Halloween remakes) has them hunted for sport. While he and his friends take bets on the prisoners’ chances of survival, the carnies are pursued by hired killers known as the Heads. Sick-Head is a Latin guy who dresses like Hitler, Psycho-Head and Schizo-Head chainsaw-wielding maniacs, Death-Head an evil German clown, his partner Sex-Head a cute girly-girl type of killer (played by the voice actress for Buttercup of the Power-Puff Girls and Tommy Pickles from Rugrats), and Doom-Head a guy who insists on long monologues before committing murder. Zombie’s wife Sheri Moon is obviously in it, this time as the victim who ends up living the longest; and Meg Foster returns from The Lords of Salem as another luckless carny. We had actually just seen her playing Evil-Lyn in Masters of the Universe. No Sid Haig or Bill Moseley in this one, though. It’s a pretty simple premise mixed with creatively weird imagery, and while I didn’t love it, I certainly don’t regret having seen it. There was an interview with Zombie after the film, and among other things he talked about how he was afraid of clowns. It seems like clowns being scary is a major theme in the media these days, but most people I ask say they were never afraid of them, even if they didn’t laugh at them either. They’re kind of a relic of an earlier era where people throwing pies at each other was considered inherently funny, not something that really stands up now even for children, but they’re still talented performers.

Like Loading...
This entry was posted in VoVat Goes to the Movies and tagged 31, clowns, e.g. daily, halloween, malcolm mcdowell, meg foster, rob zombie, sheri moon zombie, the lords of salem, the most dangerous game. Bookmark the permalink.

1 Response to Bringing Up Father Murder