Seasons Change and So Does Vertumnus

It’s common knowledge that most of the Roman gods were basically the same as Greek ones, sometimes with a few differences to reflect the culture. The Romans did have some of their own deities without Greek counterparts, however. One of these was Vertumnus, god of plant growth and seasonal change.

I’ve read that there was a bronze statue of Vertumnus at a temple in Rome, and that its vestments always reflected the current season. His festival, the Vertumnalia, was held on 13 August. As per his role of symbolizing change, he was a shape-shifter. Granted, most gods could change shape when they wanted to, but this guy was particularly known for it. He was married to Pomona, a wood-nymph who tended fruit trees.

The story of how their marriage came about is recorded in Ovid’s Metamorphoses. She lived in an enclosed garden with other nymphs, but she didn’t allow men inside. That didn’t stop them from trying to court her, however. The forest god Silvanus and the rather vulgar Priapus (whose erection has lasted much longer than four hours, yet he apparently hasn’t sought medical attention) unsuccessfully tried to woo her, as did Vertumnus. He showed up at her orchard in various forms, from a reaper to a soldier to a fisherman, often bringing relevant gifts. 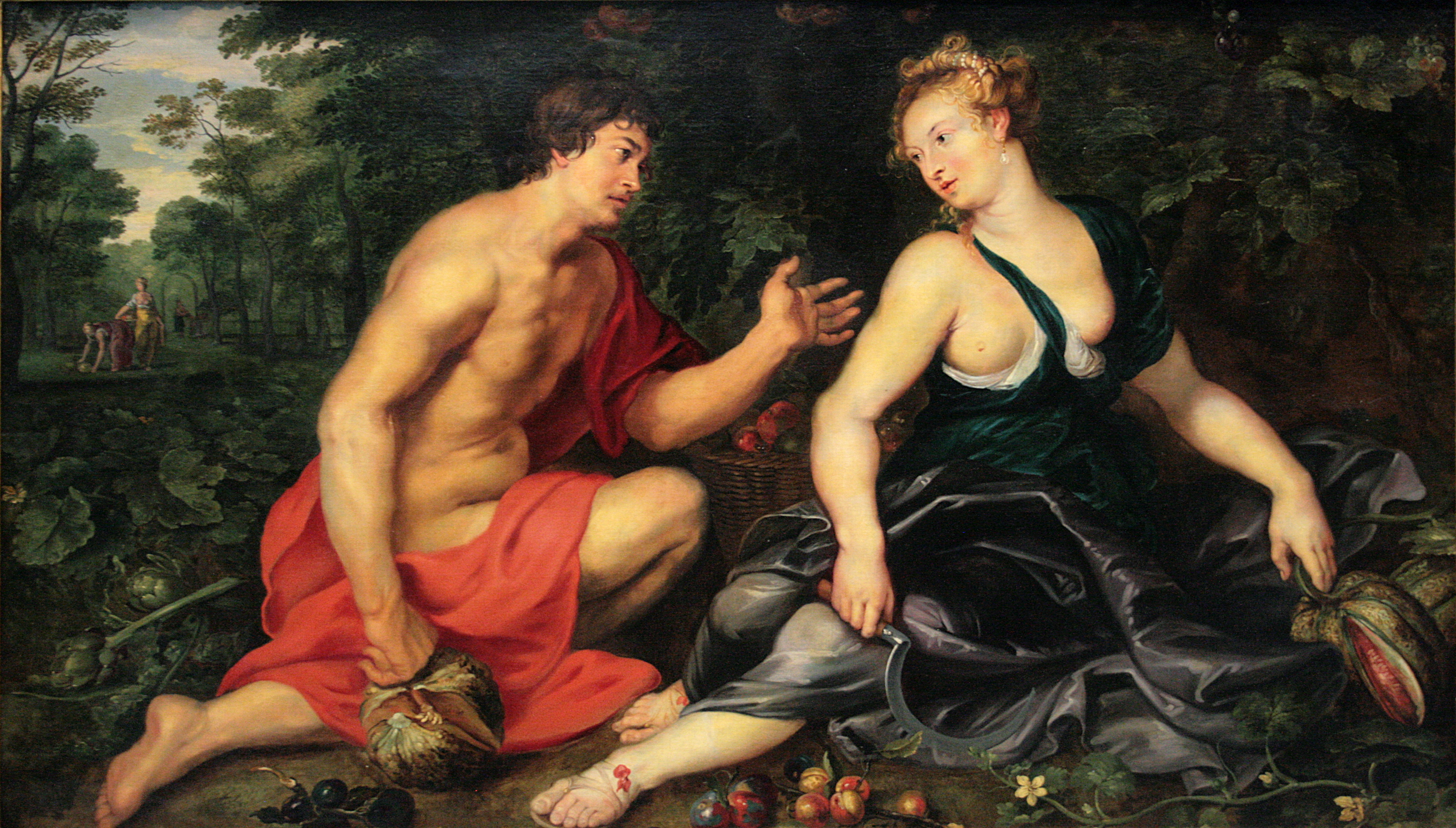 Finally, he arrived in the form of an old woman, and Pomona let him in.

He told her how stubborn she was being in not getting married, and promoted himself as the ideal husband. He eventually dropped his disguise, and instead of being angry about this dirty trick, she thought he was hot and agreed to go through with the marriage. I want to know how this myth would have worked out if the version we had was written by a woman, because what we have basically encourages stalking and trickery. Then again, things are apparently different for gods, who seem to change their minds like Vertumnus changes shape. They also tend to reward cleverness over moral behavior, except when they don’t.

Ovid indicates that this seduction occurred during the reign of Procas over the proto-Roman kingdom of Alba Longa.

I know I’ve seen mentions of a god named Autumnus, but information online is scant. It appears that some neo-pagans worship a female deity with that name, but maybe he can just switch back and forth like Vertumnus.

Ovid’s account of Phaethon has his father Phoebus attended by all four seasons, with Autumnus described as stained by crushed grapes.

From the names, it’s tempting to make Vertumnus and Autumnus a pair, gods of spring and fall, but I don’t know of any evidence to support that. The Latin for spring is ver, as in the vernal equinox, while the name Vertumnus is thought to be related to vertere, meaning “to change.” It’s also sometimes spelled “Vortumnus,” and Wikipedia suggests it comes from the Etruscan god Voltumna. Either way, I have to suspect these name influenced that of C.S. Lewis’ Faun Tumnus. There’s also a mention of Pomona blessing the apple orchard at Cair Paravel in Prince Caspian.