To Prejudge a Predator

Zootopia – Since I’d seen all of the previous Disney animated classics, I wanted to try to see new ones at the theater, and I failed with this one. Instead, I just watched it last night. It was a pretty good film that touches on a lot of interesting ideas. The setting of most of the movie, Zootopia, is a city inhabited by anthropomorphic animals (all mammals, actually) where the propaganda says that anyone can be anything, but the reality somewhat messier.

It deals with prejudice in various ways, one of the main ones being how former prey animals assume that former predators are genetically predisposed to be vicious, an obvious play on how even today some races are considered more likely to be criminals. I actually recall seeing an article accusing the movie of being racist, even though it obviously wasn’t trying to be. I don’t remember their exact points, but I do feel it’s important to note that it isn’t a direct allegory, with carnivores being black and herbivores white. We see societal prejudice at work at many different sorts of animals, playing on both actual human issues and stereotypes about animals. Jokes about other species not being allowed to call rabbits cute and a fox being obsessed with touching a sheep’s wool made the herbivores analogs of minorities. The idea of controlling through populace through fear of predators is quite appropriate considering the racism that’s taken center stage in Donald Trump’s campaign, but obviously the writers couldn’t have had that in mind. In some ways, I think this film addressed some of the questions I’ve raised about anthropomorphic animals in the past, and I’m hardly the only one to have done so. We’re specifically told that these animals used to be wild, but became civilized over time. 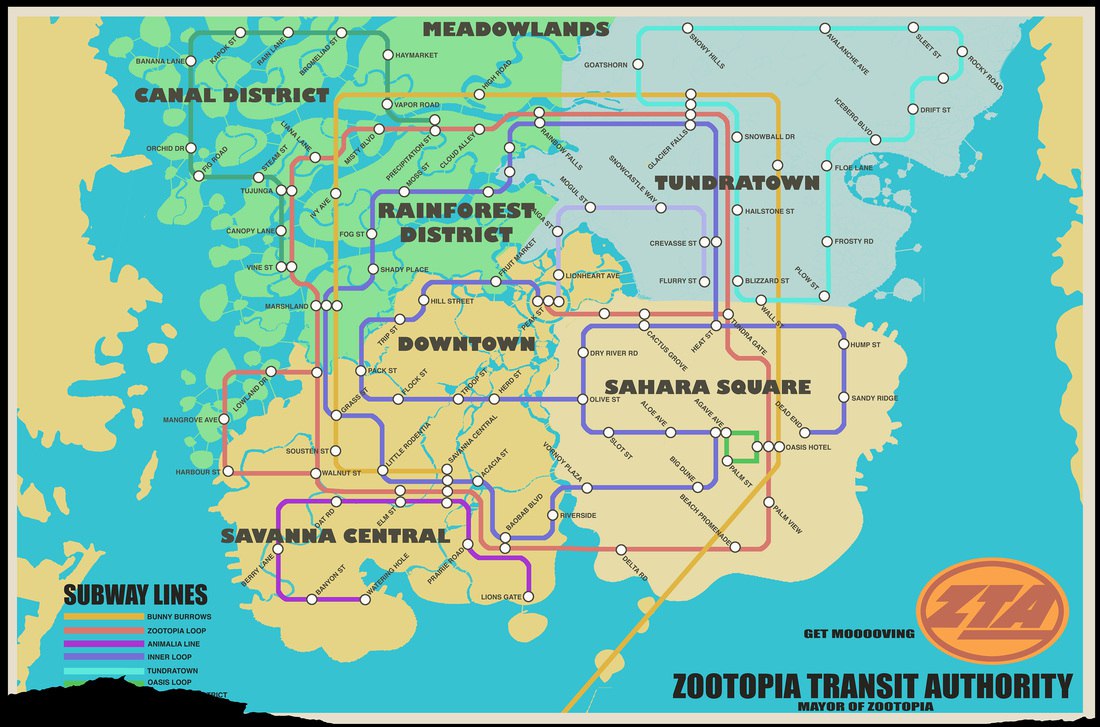 The city itself was also designed to mix an urban environment with the natural habitats of the animals, and the prejudices were ones that you could easily imagine developing in such a society. There were still some issues they didn’t address, however. The rodents and their neighborhood appeared to be way out of proportion compared to the sizes of other animals. Relative sizes were an issue throughout the film, but that took it to extremes. And what DO carnivores eat in this world? 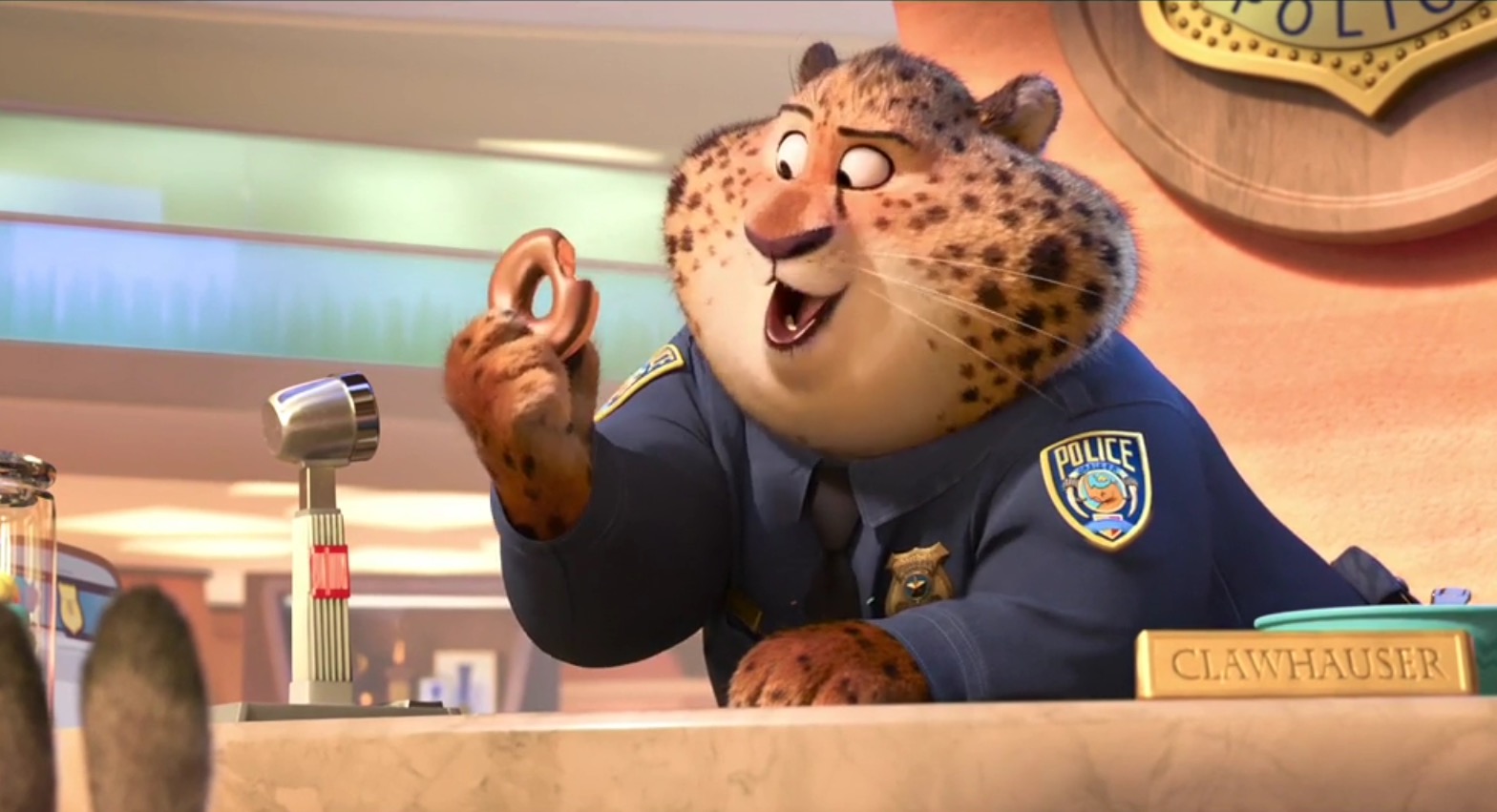 We see a cheetah eating doughnuts and cereal and a fox enjoying blueberries, but how do they obtain protein? Is eating meat totally a thing of the past, or are there non-mammals it’s still acceptable to use as food? Trying to keep flies out of a garden is still a thing, so is eating insects okay? Also not mentioned is whether there’s any inter-species dating. The only families we see are all the same sort of animal, but if different species can become good friends, why not romantic partners as well? The movie probably did the right thing in just not mentioning these things, but I still wonder.

The plot centers around Judy Hopps, a rabbit from a family of carrot farmers in the country who becomes the first bunny cop in the city. In trying to find out what happened to several missing predators, she finds herself teaming up with a fox con artist named Nick Wilde, whose main scam is breaking down elephant popsicles and reselling them to smaller animals for a profit. During the course of the film, we learn that he’s been the victim of prejudice. I found it interesting that Judy is someone who doesn’t consider herself biased and tries to judge everyone individually, yet her societal prejudice against predators comes out when she gives a speech about why animals are turning feral. Subtle racism is a major problem that isn’t examined anywhere near as often as the really blatant kind. That the actual solution to the mystery involved a ram shooting drugs at other animals is one area where the relevance to real life breaks down, but the mystery is presented quite well, tying together various elements that seem unrelated at first. The humor in the film is largely self-referential on Disney’s part: various characters advise Judy NOT to follow her dreams, the police chief tells her to “let it go,” Nick’s design is largely based on that of Robin Hood, there’s a character named Duke Weaselton voiced by Alan Tudyk (who played the Duke of Weselton, often mispronounced “Weaseltown” by other characters, in Frozen), and he sells bootleg DVDs with names that parody those of recent and upcoming Disney films.

Something else I didn’t notice until I looked on the IMDB is that Kristen Bell’s brief appearance as a sloth plays on both her well-publicized love for the animals and how her character in Frozen talked in a fast, hyper manner. An otter named Emmit was an amusing reference, and a rabbit named Stu was funny if a bit cruel.

I felt the scene with the sloths at the DMV was too obvious and went on too long (and yes, I DO get that that’s the joke; I just wasn’t a big fan of it), and a mob boss called Mr. Big turning out to be a tiny shrew was also the sort of gag that’s been done a little too often. Overall, though, the jokes worked and helped to lighten the mood of a movie that touches on some heavy themes.

2 Responses to To Prejudge a Predator