Bowser is one of the most famous villains in video games, and a favorite character of mine. Mario and Luigi first face him in the original Super Mario Bros., and they’ve gone on to battle many more times. Here’s a video I came across that shows the Bowser battles from all of the main Mario games.

The thing is, a lot of the fights with the Koopa King don’t involve any direct fighting, just avoiding contact with Bowser and his weapons. This dates back to the first game, where the main way to defeat him is to cross the bridge that he’s guarding, then remove the axe at the end to remove the bridge and send him falling down into the magma below.

I have to say that I’m still amused by how his feet move right before he falls.

Maybe he fights on a bridge because he and Gilgamesh from the Final Fantasy series went to the same school of villainy. You can also fry the repulsive reptile with fireballs, but that means you have to have that power when you reach him. Strange how, if he’s vulnerable to fire, his own breath never burns him. Then again, Mario is also vulnerable to fire while in Fire Mario mode. I guess fighting fire with fire is literal in the Mushroom World. Mario’s main attack, jumping on top of enemies, is ineffective against Bowser. This trend continues in other games. In Super Mario Bros. 3, he tries to crush you, but you can get him to break through the floor of the room.

Picture by AwesomeEriX
Speaking of which, I know that the fire coming towards you before you even see Bowser is a reference to the original SMB, but there it actually made sense. In SMB3, he’s on the other side of a door, and when you go into THAT room he doesn’t show up until you’ve almost reached the other side. So where’s the fire actually coming from? Super Mario Sunshine has the monarch relaxing in a hot tub, which you can destroy by breaking the supports.

Other confrontations require you to run away from King Koopa until you reach a switch that you can use to take out the floor, or a POW block to knock him out. Super Mario 64 is an exception in that you’re actually supposed to make bodily contact with the reptilian ruler, specifically his tail so you can throw him. 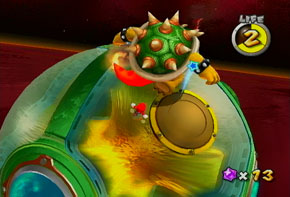 The Koopa King doesn’t appear in Super Mario Bros. 2, but this game does introduce a technique that you can employ against Bowser in later games, that of throwing objects at him. With Birdo, Mouser, and Clawgrip, you actually throw their own weapons back at them. In other cases, you have to use objects found in the room.

Similarly, you use Bowser’s own Mechakoopas against him in Super Mario World, hit him with his own son’s clown car in New Super Mario Bros. U, and fight him using meteors in Super Mario Galaxy 2.

Even an early battle in Super Mario RPG requires you to take out the chain holding up the chandelier on which Bowser is standing, although many of the RPGs simply let you use your standard attacks against the king. Not that RPG villains can’t sometimes fall into their own traps as well, as demonstrated by Ozzie from Chrono Trigger.

The question that always comes up about these battles is why Bowser always leaves a way to defeat him, often but not always a pretty obvious one. Why not just fight you somewhere other than on an easily removable bridge or a room with a relatively weak floor? Why not just drop the bowling balls out of the clown car and not the Mechakoopas, especially after he’s already been hit with a few? Does every room in King Koopa’s fortresses have a switch to remove the floor? I guess it’s possible he put those in so he could use them against invaders, but wouldn’t that mean he knows where they are and can avoid them accordingly? Why would a bridge be supported with an axe anyway?

Using an enemy’s power against them is a classic theme, but I would imagine it doesn’t work that well when your enemy is an experienced fighter. Is Bowser setting himself up to fail? Is it just part of his character to make the same mistakes over and over again? There have certainly been occasions when his insistence on kidnapping Peach in addition to whatever his other evil plans were has worked to his disadvantage, yet he continues to do it.

Comic by Greg Eales for Dueling Analogs
I guess there’s some degree of realism there; I could cite how Hitler invaded Russia after Napoleon utterly failed to do so, and their forces were presumably more competent than the Koopa Troop. Besides, Bowser is probably counting on his minions and traps doing Mario in, and his personal attack is a desperate last stand. Or is it the law of good always triumphing over evil at work, so that Bowser just naturally can’t be smart enough to succeed? Not that the good guys seem to be all that smart either, as the Princess never appears to have much in the way of security.