Throwing the Books at You

The Last Adventure of Constance Verity, by A. Lee Martinez – I haven’t read all of Martinez’ books, but I believe each one takes place in a different universe, at least as far as we know. He definitely has a kitchen-sink tendency to his works, however, giving the impression that these worlds are much bigger than what we see in the stories. This one is largely a spoof of superhero tales, yet it also includes the Roswell conspiracy, Lovecrafitan horrors, fairies, ninjas, spy capers, time travel, and a supercomputer that’s trying to control of the world. I know actual superheroes have dealt with all those things, but perhaps not in such close succession. Connie is a girl who’s saved the world many times over, having a lot of bizarre adventures in the process, and now just longs for a normal life. She first sets out to kill the fairy godmother who gave her the gift of an interesting life, but she then learns that the conspiracy behind her goes well beyond that. There are many amusing references to her past adventures, and some clever jokes on the nature of worldwide conspiracies and secret societies. The characters she meets are often so confused by all the shifting alliances that they don’t even know whom they’re working for anymore. I suppose it’s not much of a spoiler that the title isn’t accurate, and Martinez promises another story featuring Connie. Whether he actually has another idea in the works, I don’t know. Anyway, it’s a humorous adventure that also speaks to the nature of humanity.

Sewer, Gas & Electric: The Public Works Trilogy, by Matt Ruff – Another comedy novel that throws in a little bit of everything, this one takes place in an imaginary future with robotic servants, mutant animals in the sewers, a business tycoon planning a mile-high skyscraper, and a gang of eco-terrorists in a polka-dotted submarine designed by Howard Hughes. There’s a little bit of Kurt Vonnegut to Ruff’s style, but for the most part it’s even crazier. Another obvious influence on this book, but not strictly a positive one, is Ayn Rand. One of the main characters, Harry Gant, is a charming businessman with a love of trains and tall buildings, and a way to make money from pretty much anything, a bit of a play on a Randian hero. And what’s more, Rand herself appears as a resurrected artificial intelligence inside a lamp. It’s obvious that Ruff isn’t a particular fan of Objectivism, as the holes in Rand’s logic are quickly exposed, but he seems somewhat fascinated by her as a person. I haven’t read Rand and don’t plan to, but she does sound like someone who led an interesting life and was full of contradictions. Walt Disney, J. Edgar Hoover, and Roy Cohn are also satirized in the novel, and play a part in the plot. A mention of Donald Trump says that he dies in a launchpad fire in Cape Canaveral when trying to get to Mars. One bit that I found a bit uncomfortable, and I’m apparently not the only one, is that a plague has wiped out practically all African-Americans, and the majority of robot servants have the appearance and personality of congenial black servants. It’s obvious that Ruff is mocking racism rather than advocating it, but still. Also, there are a lot of characters, each with their own quirks, and it can be difficult to keep track of all of them. Then again, that kind of adds to the chaotic feel of the whole thing. To end on another positive note, there’s quite a bit of actual historical information scattered throughout, and Ruff deals with some interesting personalities both real and fictional.

Time Cat, by Lloyd Alexander – I believe this was Alexander’s first novel for children, written prior to the Prydain series. Indeed, it was partially in his research on British history for this one that he came up with his pseudo-Welsh country. It also shows his love of cats. Based on how cats often seem to disappear and reappear, Alexander gives us the tale of a time-traveling cat named Gareth who takes a boy called Jason to several different points in history, often ones in which cats were significant. Ancient Egypt is the first stop, and the boy and his feline companion also witness the introduction of kittens to Imperial Japan, the origins of tailless Manx cats, and a time in Germany when cats were said to be the familiars of devil-worshipping witches. Since it’s for kids, it doesn’t always show the bad parts of these time periods, but it does occasionally touch on them. You can tell Alexander did quite a bit research, too. It’s a fun and sweet book overall, and I’m kind of sad I didn’t know about it as a child.

Uncle Scrooge and Donald Duck: Return to Plain Awful, by Don Rosa – Fantagraphics has been doing an excellent job of reprinting Carl Barks’s Disney Duck comics, and has done a few of Rosa’s as well. The author and artist of The Life and Times of Scrooge McDuck and sort of the spiritual successor to Barks, his stories include a lot of references to the work of the earlier cartoonist. In this volume, the second released by Fantagraphics, one of the comics is a direct sequel to Barks’s “Lost in the Andes.” This time, Scrooge and Flintheart Glomgold visit the town of Plain Awful along with Donald and his nephews. In other stories, Scrooge sets up his own country through a legal loophole (with the back story involving both Sir Francis Drake and Duckburg’s founder Cornelius Coot), he and Donald fight Magica de Spell by way of a magic platter, and Rosa comments on people who only collect things in order to resell them. Rounding out the collection are a few oddities, including an unfinished comic with Donald and the boys visiting the then-new Disney MGM Studios, a DuckTales story written but not illustrated by Rosa, an incomplete Barks story featuring Gyro Gearloose that Rosa completed, and a few short tales that were written by other authors but had Rosa’s art. Rosa is known for his strict adherence to Barks’s continuity and the many background details he works into his drawings. 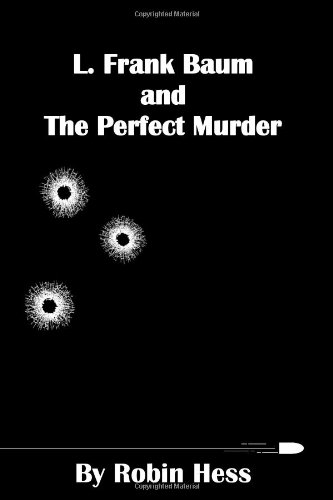 L. Frank Baum and the Perfect Murder, by Robin Hess – I’ve already read Hess’s two Oz books, Christmas in Oz and Toto and the Cats of Oz, and this is a sort of Oz-adjacent work by the same author. It incorporates some biographical details of Baum’s early life into a fictional murder mystery of sorts. I guess it doesn’t really count as a whodunit because the murderer is the most obvious suspect and there aren’t any red herrings, the focus instead being on Baum and his friends gathering the evidence necessary to convict the culprit. As a character, Baum is somewhat idealized, not perfect but pure-hearted and multi-talented. Direct references to the Oz books include characters named Glinda and Mombiton, as well as a possible origin for the name of the fairyland itself. I believe the book is self-published, so I can forgive it for not looking totally professional. Still, I hope later printings fix some of the typos, including the misnumbering of two chapters and the fact that many chapters begin with “[Type text]” at the top of the page.

Castle Waiting, by Linda Medley – The author and artist behind this work was supposed to be a guest at OzCon International, but she was too ill to attend. It’s a series of fairy tale comics, starting with a retelling of “Sleeping Beauty,” but soon turning into its own thing. Most of it takes place at a castle where several odd personalities have congregated, and most of them get their time in the spotlight. These characters include a woman fleeing an abusive husband who gives birth to a part-Leshy baby, a bearded nun plagued by a demon who is merely annoying rather than a tempter, a stork-headed man named and modeled after Arthur Rackham, a knight who’s an anthropomorphic horse, the mad Dr. Fell, and the friendly half-giant Simple Simon. There’s a slice-of-life style to much of it, concentrating more on the everyday lives of the characters than on grand adventure, although there are some significant mysteries that are eventually addressed. I noticed that there was a clear Oz reference in a dwarf being named Ruggedo, but later on Lady Jain actually finds an Oz book in the castle. Someone else makes an Alice in Wonderland reference, and a priest is reading James Branch Cabell’s Jurgen, all in what otherwise appears to be medieval Europe. The Brooklyn library system had the first volume of this but not the second, which I obtained through interlibrary loan. Unfortunately, it’s the earlier one that ends abruptly rather than the one with the epilogue, but hopefully I’ll be able to read the rest at some point. I understand Medley is currently working on the third volume.

2 Responses to Throwing the Books at You