Dorothy and the Wizard in Oz isn’t one of my favorite Oz books, perhaps because the Emerald City seems less welcoming than usual. And after a journey as dark as the one in the rest of the book, where the characters frequently have to kill or be killed. The characters journey through several underground lands before almost reaching the surface and having to call on Ozma for help. The exact location of these countries isn’t entirely clear, as Dorothy, the Wizard of Oz, and their companions reach them through fissures in the ground caused by California earthquakes, yet L. Frank Baum’s own map places them on the Ozian landmass adjacent to Boboland. The International Wizard of Oz Club’s map shows them as being underneath Boboland, which makes more sense, but still doesn’t explain how anyone could get there from California. If you consider Oz and its environs to be physically on Earth, I suppose places deep underground would be underneath many different places, as there’s less room down there. In Yellow Knight, Speedy reaches Subterranea by burning through the ground on Long Island, and arrives in Oz through another hole right next to it. And Giant Horse has Benny falling into a hole in Boston and ending up near the Emerald City, which seems to pretty much require magical as well as physical travel. All of these underground places are considered fairylands, where magic is fairly commonplace and animals can talk.

I’ve written before about the Mangaboos, but I think there’s more to be said about these strange vegetable people. They live in a city of glass surrounded by picturesque plains and mountains. It’s lit by six suns that hang in midair, each of a different color, providing light but not heat to the people below. Because the five smaller suns revolve around the biggest one, the colors of the land below keep changing. The Mangaboos are beautiful in form but largely unemotional, humanoid with expressionless faces and clothes permanently attached to their bodies. There are men and women, but since the people grow on bushes and have no internal organs, this is presumably only a cosmetic matter. The text compares the Mangaboos to potatoes or turnips, even though those are root vegetables and Mangaboos grow on bushes.

All Mangaboos living in the city are adults, as they aren’t picked until they’ve reached adulthood.

They generally only live for about five years, and are planted after they die. The Mangaboos have no need to eat or sleep, so the fruits that grow in their gardens are purely decorative. The Wizard catches a fish in a brook, reasoning that they wouldn’t be vegetable because “[f]ishes are not animals, and they are as cold and moist as the vegetables themselves.” Obviously he isn’t too knowledgeable about zoology, but he apparently turns out to be right. The fish he catches has glistening scales, and either no bones or barely noticeable ones. Undesirables are either thrown to the Clinging Vines, writhing plants that crush everything they touch; or imprisoned in the Black Pit. Fortunately, this pit leads to another country. At least, all of this is true at the time of this book. Melody Grandy’s Disenchanted Princess has Tippetarius (then calling himself Amadin) brought to the Vegetable Kingdom by Himself the Elf. He escapes, taking a Mangaboo who actually feels compassion with him, and later returns with Zim. Zim’s experiments in cross-breeding the Mangaboos with Rose Kingdom royalty result in their becoming longer-lived and actually caring about each other. We’re told in this book that Mangaboos fear the Black Pit because they need light to function, and are healthier the closer they are to their suns. We also learn the names of the suns: Midron, Firenth, Wichtar, Augreth, Imton, and Kizrioth. One of the Mangaboos tells Tip, “Names are for those who are different,” which explains why the only one with a name in DotWiz is the sorcerer Gwig. Most Mangaboos who don’t meet the standard of beauty are weeded out, but the prickly sorcerers are allowed to remain due to their useful skills.

In Sherwood Smith’s Trouble Under Oz, Kaliko magically transports Dori, Prince Inga, and Ruggedo’s son Rikiki to the Vegetable Kingdom, where they find the Mangaboos just as heartless as before, even though this presumably takes place after Zim’s biological reforms. Dori even speculates that their ruler is the same princess Dorothy and the Wizard picked, but this is probably not true considering how short-lived the people are.

The visitors in this book learn that there are mermaids in the waters of the kingdom, and the Mangaboos keep covering them with glass to preserve their beauty. Dori convinces them to stop doing this. In Scott Dickerson’s Ruggedo, the Mangaboos are still largely unemotional, but somewhat kinder than before, and many of them now have names. They are largely obsessed with doing their duty and what is proper. Only members of the royal family are able to lie. The vegetable people also adopted some foreign habits that aren’t strictly necessary for them, so they have a cafe that serves only air and money that isn’t really worth anything. They have no written language, but shops advertise their wares with pictures. Ruggedo goes there to take the Colorless Gloves belonging to Queen Ssyr, which are able to grab anything, no matter how far away. The Mangaboos themselves are apparently unaware of this power. The old Nome King reaches the place by means of a pineapple-shaped mountain in the Land of the Phanfasms, which leads to a passage through an ice volcano, then to the Vegetable Kingdom. Tizzland, which as per Phyllis Ann Karr’s Gardener’s Boy, is a country that can be reached through a mud shaft under the lake in Jinxland, is apparently a “few valleys over” from the Mangaboos’ land.

Inhabited by insect people with wings and inundated with new hatchlings, it’s the law that anyone who lives there more than three months is put to death. Their ruler was whoever possessed the Crystal Butterfly, but since they didn’t much care for rulers, they weren’t all that upset when the Rakpat turned it to china and it broke. The executioner Big Zector and his mate Zuzanna left Tizzland to found their own country, which they did in the mountains east of Oz, calling it Zectorland. It’s not specified whether anyone changed in Tizzland.

On the other side of the Black Pit is the Valley of Voe, a lush place “shaped like the hollow of a great cup.” It is known for its dama-fruit, which makes anyone who eats it invisible. It tastes so good that pretty much every animal there does, including the ferocious bears. The fruit apparently only works in the valley itself. Jack Snow proposed that its name might be an anagram of “Adam,” since he ate the forbidden fruit. There’s also a plant that allows people to walk on the surface of the water, where the bears won’t venture. 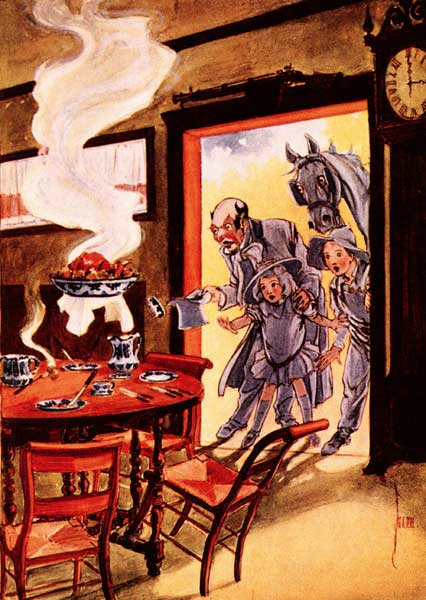 Dorothy and the Wizard visit a friendly family, but learn nothing about the government of Voe. One of John R. Neill’s illustrations shows what looks like a castle in the background, however.

There’s an Oziana story, Jay Delkin’s “The Mysterious Palace of Voe,” that has the Wizard exploring this castle while under Glinda’s tutelage.

Trouble adds that the beautiful Tasca Birds don’t eat the dama-fruit because they’re so proud of their plumage, and that some caves there lead to the Nome Kingdom. Also in some of these caves are the snake people known as Hizzers, who hate Nomes.

The reptilian Dinods and nasty Spider-Bats also live in the area and are enemies of the Nomes.

At one end of the valley is Pyramid Mountain, home to the Braided Man, from which a flaming black sea is visible. Cloud fairies and giant birds can be seen above it, but not much else is known about this area.

The mountain ends in the Land of Naught where the wooden Gargoyles live.

They’re totally silent and hate any kind of noise, and I’m wondering if there’s an intentional theme of each place visited in DotWiz lacking something we normally take for granted. The Mangaboos have no emotions, the people of Voe are invisible, the Gargoyles make no sound, and the Braided Man makes intangible products. The Wizard sets fire when leaving Naught, and in Disenchanted Princess the whole place is in ruins and uninhabited. At least one Gargoyle, Gorry, must have escaped the fire, or been away at the time. Andrew and Rachel Heller’s “Celebrating Ozma: The Silver Jubilee Issue” indicates that some Gargoyles work at the post office in the Emerald City. The city is back and thriving at the time of Ruggedo, so maybe there was a rebuilding project at some point. Maybe the Wizard himself had to go there and help out in order to do penance for burning the place down.

Finally, discussing the Mangaboos gives me an excuse to plug the photography of Xenia Joy. She has several Oz-themed pictures, including this one of the Mangaboo Princess.

2 Responses to Mangaboos and More