The Power of Christ Compels You to Read This Book 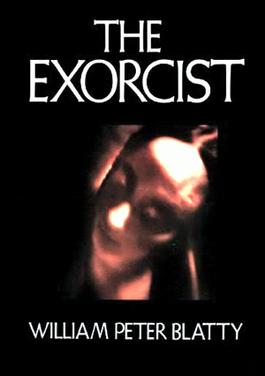 The Exorcist, by William Peter Blatty – The movie version of this was one of the first films Beth and I saw at the theater together. I’m pretty sure the VERY first was X-Men, but we saw the re-release of this one in 2000.

She grew up watching horror movies, while I didn’t. The story is partially based on an actual exorcism that occurred in Maryland, or at least there’s a popular rumor that it did. The common account is that, in the late 1940s, a boy was said to be moving and levitating objects in his vicinity. His family was Lutheran, but the pastor suggested consulting a Catholic priest. Unsubstantiated accounts claim that, during the exorcism, the boy loosened one of his arms from its restraint and attacked a priest with a mattress spring, and that his bed was shaking and words appearing on his body. I don’t believe the boy’s real name is on record, but he was commonly called Robbie Manheim in articles on the case. Blatty’s possessed girl, Regan MacNeil, has the same initials. We have a cat named Reagan, and while we didn’t name her, Beth prefers to associate her with The Exorcist rather than the former president. And yes, I know the cat’s name has an extra A. The book confirms that Regan was named after King Lear, and that her mother considered naming her Gonerill. The Wikipedia article states that Father Merrin’s first name and appearance were based on Gerald Lankester Harding, an archaeologist (but not a priest) who was responsible for much of the study of the Dead Sea Scrolls. And I’ve already written a bit about the demon Pazuzu.

Due to an unusual amount of down time when I wasn’t able to access the Internet, I read the book in two days. I noticed it was very similar to the movie, right down to much of the dialogue. There was an additional subplot about the Swiss housekeepers having a daughter who’s a drug addict and her mother thinks is dead. The book does a good job of building up Regan’s possession little by little, with it being a long time before anything indisputably supernatural happens.

Father Damien Karras was a well-developed character, and Beth has said he’s one of her favorite literary/cinematic personages.