SPOILER WARNING, especially for The Yellow Knight of Oz

Ruth Plumly Thompson introduced the character of Sir Hokus of Pokes in her first Oz book, The Royal Book of Oz, and he quickly became a standard part of the royal court of the Emerald City alongside such familiar faces as the Scarecrow and the Patchwork Girl. He’s an old knight who speaks in the style of English commonly associated with knightly romance. Dorothy and the Cowardly Lion find him in the slow city of Pokes, where he’s been trapped for centuries, and help him escape. When he first meets his rescuers, he tells them, “Long centuries ago, mounted on my goodly steed, I fared from my father’s castle to offer my sword to a mighty king.” Hokus doesn’t remember the name of this monarch, but Dorothy suggests it could be King Arthur. When escaping, he sings “verse after verse of an old English ballad.”

And in Kabumpo, Thompson explicitly ties the knight to Arthur: “Yet the knight was so old that it would give me lumbago just to try to count up his birthdays. He dated back to King Arthur, in fact, and had been wished into the Land of Oz centuries before by an enemy sorcerer.” So he’s from medieval England, right? Well, not according to Yellow Knight, which explains Hokus’ past in detail, but doesn’t entirely match up with what we’re told in earlier accounts. And yes, I had thought there were other mentions of Hokus being from Arthurian England, but I couldn’t find any. Thompson actually becomes somewhat more vague about the matter after Kabumpo. Cowardly Lion just refers to him as “a knight so many centuries old that only in Oz could he be alive at all.” Lost King establishes that there might be some mysteries wrapped up in the knight’s past. Thompson writes, “Dorothy and Ozma, remembering Sir Hokus’s strange history, felt that he might easily be the lost King of Oz.” Perhaps she was starting to consider delving into Hokus’ back story, but I’m not sure how he could have been Ozma’s father if he’d lived for centuries in Pokes. The knight is somewhat forgetful when Dorothy meets him, however, and his own account of how he ended up in the sleepy town could be a planted memory. Gnome King gives Hokus’ age as seven centuries, presumably meaning he was born in the thirteenth century. Geoffrey of Monmouth placed King Arthur’s reign in the sixth century, but later details of the Arthurian legend, like the knights in armor with a code of chivalry, match up more closely with the thirteenth. Of course, Arthur couldn’t have been the ruler of England during a time when we have detailed historical records of the monarchs. T.H. White purposely joked on the anachronisms in The Once and Future King, but I don’t know if Thompson had any opinions on this matter. Not that it makes much of a difference for our friend Hokus, however, as Yellow Knight makes it clear he’s from Oz in the first place.

As per Yellow Knight, Hokus’ real name is Corum, the Yellow Knight of Oz and Prince of Corumbia. Yes, Thompson had a thing for making all her characters with mysterious pasts turn out to be royal, but some of of the Knights of the Round Table were as well. He was on his way to the neighboring kingdom of Corabia to compete in a challenge for the hand of Princess Marygolden. The Sultan of Samandra, fearing an alliance between the nations, transformed everyone in both kingdoms. He was also the black knight and sorcerer who banished Corum to Pokes. His stay there is confirmed as having been about five centuries, which means he was around 200 years old when he set out from his father’s castle. If his recollection in Royal Book that he has “never had a real adventure–never killed a dragon–nor championed a lady–nor gone on a Quest” is accurate, it leaves the question of why he waited so long. It also implies that the Corumbians were already really long-lived at this point, despite other suggestions that Ozites aged at what we would consider a normal rate until around the time of Ozma’s ascension to the throne. He also claims while in Pokes that he’s never heard of Oz and expresses surprise at the Lion talking “quite manfully” even though his horse is revealed to have been able to talk. He remembers the sorcerer-sultan as having shouted, “Live, Wretch, for centuries in the stupidest country out of the world,” while in Yellow Knight he remembers it as “Live, wretch, for centuries in the stupidest Kingdom in Oz.” Is his memory coming back or getting more confused? 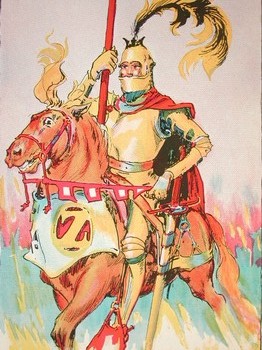 At the end of the book, Corum is restored to his old self, including regaining his youth. (Strangely, that last sentence is not a contradiction.) As fans have pointed out, a young knight doesn’t have the potential as a blustery, constantly frustrated old knight. Royal Book presents him as a man out of his element, seeking to fight dragons and giants but rarely getting to. There’s a bit of Don Quixote about him, except while Quixote lived in the mundane world and encountered windmills when he expected giants, Hokus instead finds a childish giant made of candy and an ancient, tame dragon who doesn’t put up a fight.

He becomes more used to modern Oz in later books, even picking up some American slang from Betsy Bobbin and Trot, but continues to always have the desire to go on quests and fight monsters.

Thompson rarely used him after his disenchantment, although he does make a visit to the Emerald City in Wishing Horse and is mentioned a few other times. John R. Neill does use him, but pretty much ignores Yellow Knight, instead giving the character his old name, appearance, and personality.

Thompson herself seems to follow suit in Yankee, in which the character is only called Sir Hokus during his brief appearance, never Corum or the Yellow Knight. This confused me when I first read the books, but perhaps the simplest explanation is that he aged a bit and grew back his mustache after Yellow Knight. J.L. Bell’s suggestion is that fatherhood might have been what drove him back into old habits. Whether Corumbia has anything to do with Arthurian England remains to be seen. Maybe it was settled by members of Arthur’s court who discovered some way into Oz. I think it’s pretty clear that Hokus himself never actually lived in England despite some evidence to the contrary, however. Then again, there ARE those mysterious 200 years before he was sent to Pokes.