My general formula for deciding what comics to read consists of seeing what looks interesting on the shelves at the library. The problem is that a lot of what I see there is a follow-up to something else, and even the ones that start a new storyline often build off earlier ones. This is good in a way, as I appreciate a sense of continuity. It can make it difficult to keep up, however. I guess it’s not as much of a problem when you’re just reading for the action, but I like a little more exploration of character.

Justice League of America: The Silver Age, Volume 1, by Gardner Fox, et al. – While I tend to read more comics that are either Marvel or not from the Big Two, a DC title will occasionally catch my eye, and it’s usually an old one. Not surprisingly, the stories here were as corny as all get-out, but fun.

Originally published in the early 1960s, they introduce Snapper Carr, part of the trend of regular people hanging out with superheroes. Basically created by editorial mandate, he speaks in then-hip lingo, sort of a Poochie of the sixties.

The character apparently became more interesting in later comics, some of which even gave him powers of his own, but at this point he’s mostly just obnoxious. I also noticed that these stories tend to downplay Superman and Batman in order to give the others a chance to shine. Not that there’s much focus on anyone’s character; it’s more about creative uses of their abilities.

Spider-Man – I had heard some good things about the Ultimate Spider-Man titles starring Miles Morales, so I checked out a few of them. In a world where Peter Parker dies fighting the Green Goblin, Miles is also bitten by a radioactive spider, and takes over the mantle of Spider-Man. 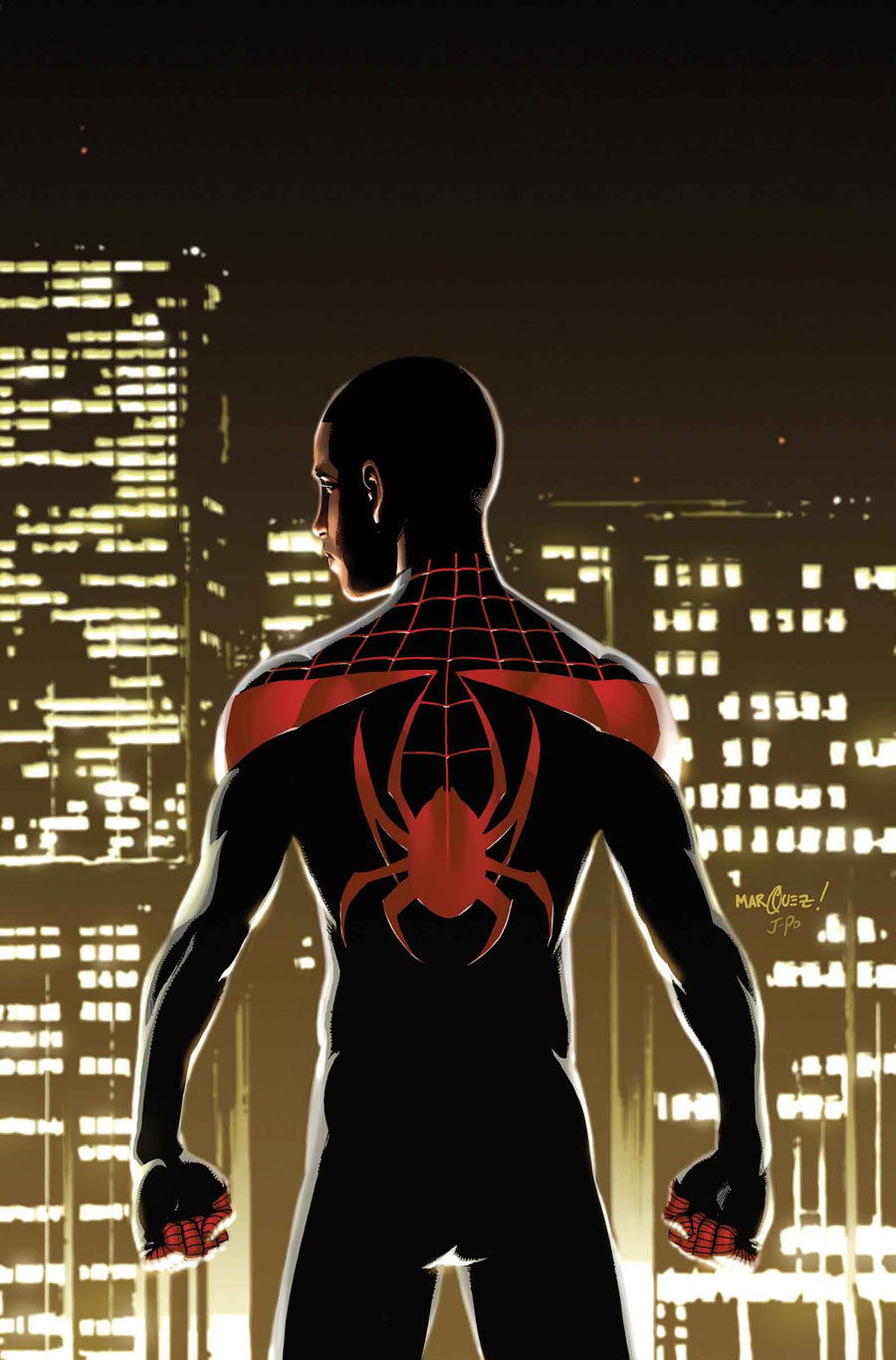 Not wanting to reveal his secret identity to his father, he is for a time blackmailed by his criminal uncle into being a mob enforcer. Later, he learns of his dad’s own background with SHIELD. And if you’re concerned about a non-white Spider-Man only existing in a side universe, he apparently crossed over into the main one after Secret Wars, serving the role in New York. Another alternate-universe title that’s currently running is Spider-Gwen, in which it’s Gwen Stacy who’s bitten by the spider, and Peter is once again dead. 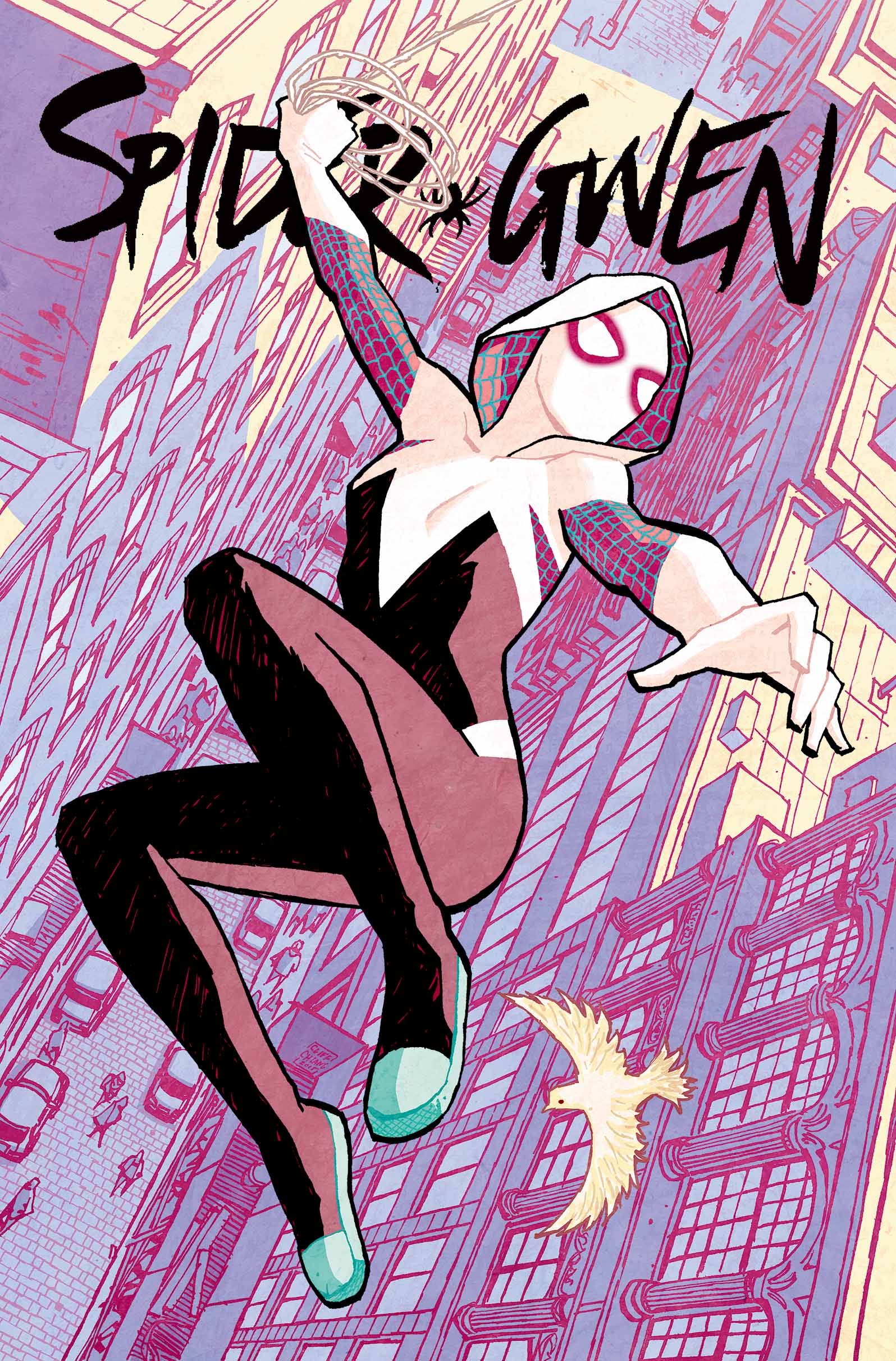 These and other spider-themed heroes, including Spider-Ham, team up to fight a family of trans-dimensional hunters in the Spider-Verse crossover.

Star Wars – Marvel published a series of Star Wars comics back when the original trilogy was still new, and recently started a new one, probably helped by the fact that Disney now owns both properties. I don’t think there are going to be any crossovers with other Marvel series, however, which means Carol Danvers’ cat (well, actually flerken) Chewie will likely never meet the actual Chewbacca. While there are multiple Star Wars comics being released, and many of them show up at the library, the main titles are ones taking place just after A New Hope. Luke learns more about Obi-Wan Kenobi (apparently he kept an actual physical diary, seemingly a rarity in the galaxy), Darth Vader seeks to regain the Emperor’s favor and finds out that Luke is his son, and Han and Leia encounter a smuggler who claims to be Han’s wife. The stories and dialogue are faithful to the characters and the world. Most recently, I read some of the Darth Vader and Vader Down series that have Vader teaming up with Dr. Aphra, a scientist who constantly sucks up to him.

With her help, he gains the assistance of two droids who are basically evil versions of C-3PO and R2-D2, the psychotic protocol droid Triple-Zero and the astromech assassin BT-1.

Delilah Dirk – Tony Cliff’s adventure stories about a bad-ass fighter in nineteenth-century Europe and Asia have some appealing artwork and characterization. The comics are well-researched and mostly fairly realistic for the time, although there are a few fantastic elements, like the flying ship.

Holy Bibble – This is an online comic that I felt worth mentioning because it fits with my interests. It’s basically a comic retelling of the Bible, but with other myths mixed in. There’s presumably some Gnostic influence in that there’s only one real god, the impersonal creator Elohim, with the other deities being angels or demons in disguise. This includes Yahweh, a grandfatherly but rather pathetic man created by Satan who has trouble controlling his powers and keeping followers.

The jokes include riffs on religion, but it’s not primarily a spoof on belief so much as on the myths themselves. There’s some complex back story about the various factions of heavenly and mortal beings, but also plenty of clever one-shot gags.