Uprooted, by Naomi Novik – This is the first book I read by this author. I know she has a popular series of books set during the Napoleonic Wars but with dragons. Partially inspired by Slavic mythology, it’s the tale of a girl who becomes apprentice to a cranky old wizard known as the Dragon, and battles an evil forest that captures and corrupts people. It was pretty dark in spots, not just in a fantastic way, but also in such bits as the prince trying to rape Agnieszka. I also found the sexual tension between her and the Dragon rather disturbing; it reminded me of the main characters in the Paper Magician Trilogy, but I don’t think they had as much of an age difference. Fortunately, that wasn’t the main point of the story. Agnieszka’s development as a witch was interesting to follow, with the novel told from her perspective. I didn’t like it as much as many readers apparently did, but it was a pretty solid story, and I’d be interested in reading more by Novik.

House of Leaves, by Mark Z. Danielewski – I believe this book is considered post-modern, a seemingly paradoxical term that I have trouble wrapping my head around. I think it has something to do with the abundance of references and meta-references, and the non-linear structure of the narrative. Regardless, I really enjoyed it. It’s ostensibly the story of a couple who move into a house that turns out to be larger on the inside than the outside, and how the owner explores the shifting empty corridors that sometimes appear within it. The book is based around a film made about the house, which was apparently a cult classic viewed by many famous people. A mentally troubled tattoo artist called Johnny Truant receives the manuscript from a blind man in his best friend’s apartment building, and finds no evidence that such a film actually exists. Many of the references in it are also non-existent, none of the celebrities mentioned in it have heard of it, and Johnny’s search for the house proves fruitless. Then again, Johnny is himself a rather unreliable narrator. In his notes, he often goes off on tangents about his life, full of bar-hopping, drug use, and sexual escapades. The conceit that the book is the work of a few different authors, none of them totally in their right minds, is an interesting one, as is the use of non-standard textual layout and roundabout footnotes. In one chapter, not only do the footnotes keep looping back on each other, but they include several seemingly pointless lists of names. It’s often quite funny, almost a parody; yet there are plenty of genuinely disturbing parts as well.

New Crobuzon Series, by China Miéville – This series is made up of three books set in the world of Bas-Lag: Perdido Street Station, The Scar, and Iron Council.

Miéville has described his work as “weird fiction,” and while that’s a rather vague description, it’s pretty appropriate. These books are fantasy with elements of politics and horror, set in a world containing both magic and Victorian steampunk technology, inhabited by many different types of creatures often based on mythology. Perdido Street Station sees the city of New Crobuzon dealing with an invasion by trans-dimensional moth-like creatures that feed on minds and secrete a substance that’s being sold as hallucinogenic drugs.

A scientist enlists the aid of a god-like spider in fighting off these animals. In The Scar, the crew of a ship is captured and forced to live in the floating pirate city of Armada. A complex plot involves a lot of manipulation and betrayal, the summoning of a giant sea creature, war with New Crobuzon and the ferocious grindylows, and a place where possibility overrides reality. Iron Council is a more political tale that deals with golems and a collectivist society on board a train. It’s a fascinating world to visit, but I do have to admit I sometimes lost track of the plots. 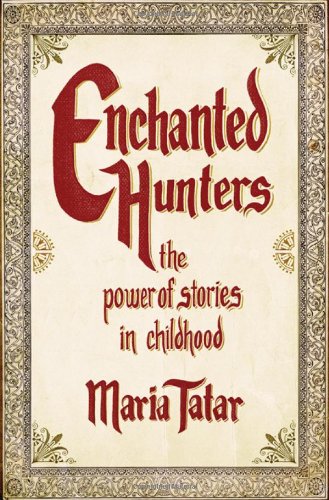 Enchanted Hunters: The Power of Stories in Childhood, by Maria Tatar – The author, a professor and expert on children’s literature, here turns to the subject of how books affect child development. Tatar explores how storytelling and bedtime reading have changed over time, what attracts kids to books, and what lessons children can learn from reading or being read to. Examples range from old classic fairy tales to newer works like the Harry Potter and His Dark Materials series. There are significant sections analyzing Lewis Carroll’s Alice books, J.M. Barrie’s Peter Pan, Dr. Seuss, Maurice Sendak, and The Wizard of Oz. Tatar does tend to mix together elements of the book and the MGM movie, but to be fair, kids growing up on both probably do as well.

1 Response to Weird Worlds of Words