Don’t Morlocks Live in the Future?

The Time Machine, by H.G. Wells – Published in 1895, this was not the first time travel story, but definitely a pioneering work in the genre. The protagonist known simply as the Time Traveller uses a vehicle to travel to the year 802701, in which humanity has evolved into two different sets of beings. The Eloi are small, innocent humanoids who live in an Eden-like paradise on the surface, while the Morlocks dwell underground and treat the Eloi as livestock. The Morlocks are also the smarter ones, who maintain the technology that keeps Eloi society running. I was familiar with the general plot structure, but not so much with the social commentary in the plot. The Time Traveller theorizes that the Eloi and Morlocks are the descendants of the upper and lower classes of his time, respectively, the figurative arrangement of the rich living idle lives while the poor do the actual work becoming literal over the millennia. While the protagonist immediately abhors the Morlocks, there’s also the sense that they turned to cannibalism out of necessity rather than choice. Later adaptations of the story have added more contemporary elements to the basic tale. It’s been years since I saw the 1960 film, but I remember it heavily addressed the fear of nuclear war, both by having the Time Traveller (here given Wells’s own name) make a stop in a war zone in 1966, but with the Morlocks using air raid sirens to lure the Eloi underground. I haven’t seen the 2002 version, but I understand it deals with paradoxes, and has the Earth largely destroyed in 2037 when colonists blow up the Moon.

The Invisible Man, by H.G. Wells – The two Wells stories were in one volume, and I was surprised that this one was longer than The Time Machine, which had a more complicated scenario. In this, a researcher learns how to make himself invisible, but learns that there are too many disadvantages to it. He starts robbing and blackmailing in order to support himself, and finally proposes a Reign of Terror before being taken down by a former colleague. This story was responsible for the image of an invisible person dressing in bandages, a trenchcoat, and a wide-brimmed hat when he wants to communicate with people. 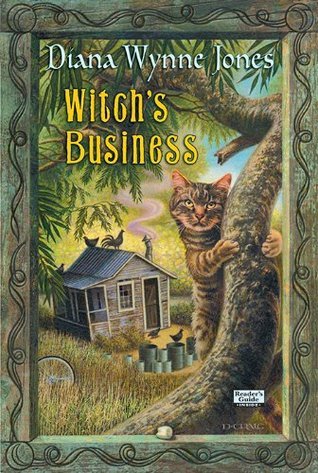 Witch’s Business, by Diana Wynne Jones – I believe this was Jones’s first children’s novel, published in 1973. An earlier title for it was Wilkins’ Tooth, which makes sense once you’ve read a bit of it, but probably wasn’t as enticing to potential readers. While not as good as many of her later books, it does establish the theme she’d use frequently of normal people gradually discovering that the supernatural exists, leading to a mixture of the mystical and the mundane. The plot involves two kids setting up a revenge business, only to find it much more difficult than they had thought. Not only that, but they’re seen as competition by the local witch. The first few instances of witchcraft can be seen as coincidence or suggestion, but it’s slowly built up that Biddy Iremonger has actual powers, as well as a grudge against one of the families in town. The kids, who initially have their own feuds, have to team up to defeat her. One thing I found amusing was the local bully’s slang, which used a lot of words that were foul-sounding but not at all actually vulgar, like “slimy” and “disemboweled.”

The Abominables, by Eva Ibbotson – I think I might have seen some of her books in libraries or bookstores before, but never considered picking up one of them. I received a recommendation for another book of hers, though, and read this one instead because it was automatically available from the library. It’s a good story, detailing the adventures of a family of friendly, educated yetis making their way from the Himalayas to their tutor’s old home in England. After several interesting experiences in various countries, they arrive there, only to find themselves the choice quarry of a hunting club. The idea of monsters being smart and polite while some humans are monstrous is an old one, but I quite liked the yetis. It reminded me of Roald Dahl, if rather less sadistic.

Suck It, Wonder Woman!: The Misadventures of a Hollywood Geek, by Olivia Munn with Mac Montandon – I really don’t know all that much about Ms. Munn, but I’ve had positive associations. Okay, it kind of rubbed me the wrong way back when she started working on The Daily Show and her response to a question about a Jezebel article on how women aren’t being hired to work in comedy was basically, “Nobody’s ever heard of Jezebel.” Actually, I think I’d heard of them being hearing of her. On the other hand, why the hell would you ask her that question? Why not ask, say, the men in charge of hiring on comedy shows who aren’t considering women? There were a few things that bothered me about this book, mostly seeming contradictions from Munn. She makes a point of how her body is natural and not Hollywood-enhanced, but still makes fat jokes. And she tells stories about how badly women are treated in the entertainment industry, then says she doesn’t consider herself a feminist. Almost seems like she wants to have it both ways, but then, this book DID come out six years ago. Overall, though, I liked it; the humor was pretty whimsical, with some moments of insecurity and self-deprecation as well.

1 Response to Don’t Morlocks Live in the Future?