This video is two years old now, and I first watched it more than a month ago, but I thought it was worth commenting on. As it mentions, jumping in video games is kind of bizarre, because how often do people jump in real life? I guess basketball players do so a fair amount, but even the highest-leaping among them don’t come anywhere close to the height that someone like Mario can get.

This Polygon article states that Donkey Kong was the first video game with a jump mechanic; I don’t know if that’s true, but it was definitely an early example of the movement. In fact, the protagonist who eventually became Mario was originally known as Jumpman, so obviously the jumping was considered important.

Picture by Brendan Tobin
That said, Jumpman was hardly as impressive a jumper as he would become in future games. His jumps were the same height and distance every time, and falling down more than the height of his jump would kill him. That makes a certain amount of sense, as he’s landing on a steel girder, but it looks a little strange compared to later games. In Super Mario Bros., there’s a lot more of a sense of physics to Mario’s jumps, but they don’t match real-world physics. He can leap five times his own height, change direction in midair, and not get hurt at all when landing. Actually, I’ve always thought the landing thing was a little tricky. In the two-dimensional Mario games, the hero can fall any distance without harm as long as he ends up within the level. Indeed, the first SMB has him falling down out of the clouds that he reached by means of a beanstalk. On the other hand, if he falls in a pit, he dies instantly. So what’s at the bottom of those pits? He also falls at pretty much the same rate he jumped, with no acceleration due to gravity at work. A running start will aid a jump, and so will pressing the jump button down instead of just tapping it. Mario’s jump is also an attack, and I suppose jumping on top of a living thing WOULD hurt them. There were originally plans to give Mario a weapon (one he could use all the time, not only occasionally like a Fire Flower), but the jump attack economized this. Not all enemies can be hurt by jumping on them, and there’s usually some graphical indication as to why. Also a traditional part of Mario’s jump is the “boing” sound that it makes.

I seem to remember that, the first time I saw a Mega Man game, it sounded wrong that there WASN’T any sound when the Blue Bomber jumped, just when he landed. That’s actually more rational, though, isn’t it? Among other things, this article compares and contrasts the jumping mechanic in SMB and the early Castlevania games, pointing out that Simon Belmont‘s jumping is much more realistic, but also less satisfying. It also mentions something else I’d thought of before, which is that Mario can’t just climb a staircase, but has to jump up. 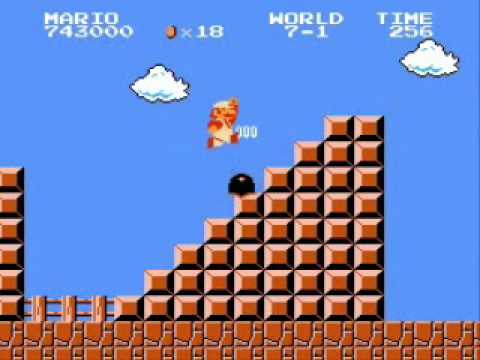 The Japanese SMB2, released in the States as The Lost Levels, lets Luigi jump higher than Mario, but also gives him less traction. All four of the playable characters in the American SMB2 have different jumping abilities, with Luigi using some sort of bicycle kick to his legs in order to jump the highest, while the Princess can hover for a little while. I have to wonder whether she’d be able to do that if she weren’t wearing a dress. In Super Princess Peach, she can only float with the aid of her parasol.

I believe SMB2 is also the only Mario game in which you can jump higher by ducking first, whatever sense that makes. Later games give characters the ability to spin jump, double jump, jump off walls, and so on. In the Yoshi games, he can flutter jump through the air.

The role-playing games often let Mario bounce repeatedly on an enemy for extra damage. As I’ve mentioned before, Mario is kind of chubby, and even the thinner Luigi doesn’t exactly have an athletic build. While the Mushroom World might have different gravity, or perhaps the characters are affected by the same levitation magic that keeps the bricks in the air, Mario is famed for his jumping ability even within that world. So it seems like there must be something special about him, and by extension the other playable characters as well. Maybe their abilities are related to those of the Dragoons from the Final Fantasy series, although they use weapons in their jumping attacks.