Teenage Mutant Ninja Turtles: The Ultimate Collection, Volume 1, by Kevin Eastman and Peter Laird – I picked up a digital copy of this from Comixology when they were having a sale, and I kind of wish I’d bought other volumes as well. Not a big deal, though; I have plenty to read, and Comixology is good about running sales periodically. I grew up with the original TMNT cartoon due to my brother watching it pretty regularly, and was aware that it was based on a comic book that was grittier and less goofy, but never checked it out. Intended as a spoof on the dark and violent comics that were popular at the time, the comic made some pretty direct references to Frank Miller’s work on Daredevil. The Turtles’ origin was specifically tied in with Daredevil’s, and their mentor Splinter and enemies in the Foot Clan parodied Stick and the Hand.

The TMNT universe also has a Retxab Building in New York City, which in addition to being seemingly impossible to pronounce, is a reference to the home of the Fantastic Four. For that matter, it’s mentioned in a story with a character NAMED Baxter. Although the concept was always supposed to be funny, the comic really isn’t internally so the way the cartoons and movies are. Instead of the Turtles joking about everything, they instead take the ridiculous situations quite seriously. These early stories have started developing the Turtles’ individual personalities to some extent: Leonardo is the leader, Donatello the tech guy, and Raphael the angry, aggressive one. I didn’t see as much characterization for Michelangelo, and I understand that the surfer lingo and pizza obsession were largely if not entirely created for the cartoon. Another interesting note that ties into the level of violence is that the comic Splinter trained the Turtles to flat-out KILL the Shredder, and they apparently do within the first storyline, in much the same manner as in the first film (he falls off a roof into a garbage truck). I believe he does eventually come back in some form, but not for a long while. 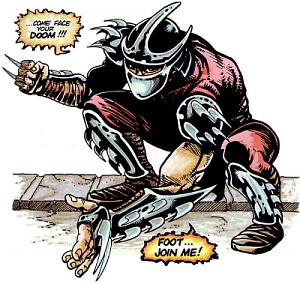 In a weird way, Shredder is kind of like Bluto, in that he’s a villain only intended for one story who in later media became the main recurring antagonist. And in both cases, even media that hew closer to the original tend to use this villain often due to how closely they’ve become associated with the franchise. These early tales also introduce Dr. Baxter Stockman and his Mousers, April O’Neil (here a lab assistant rather than a news reporter), Casey Jones, the Utroms (although they aren’t called that yet), the Triceratons, and a robot called Fugitoid who’s actually a crossover character from an earlier Eastman/Laird project. It’s fascinating to see how these concepts that have been reintroduced in so many different continuities originally got started. It’s pretty telling that something called “Teenage Mutant Ninja Turtles” became so commonplace that the phrase doesn’t even sound absurd anymore. I guess it’s like the Be Sharps, and it gets less funny every time you say it.