Harry Potter and the Cursed Child, by J.K. Rowling, Jack Thorne, and John Tiffany – Does Rowling have some debts to pay or something? Several years after the Potter series was brought to a close, we’re now seeing this play script and apparently more than one movie based on a reference book. Apparently someone saw how The Hobbit was made into three different films, and said, “We can do better than that!” I believe the Enchanted Beasts and Where to Find Them movie opens on my birthday, but I doubt I’ll see it in the theater unless someone else wants to go. Anyway, there was a long wait for Cursed Child at the library (and that’s the electronic version), but I finally was able to read it. It jumps off from the epilogue of Deathly Hallows, which I guess means it takes place next year. Harry and Ginny’s son Albus becomes best friends with Draco Malfoy’s son Scorpius. Harry is okay with this at first, but when hearing something about a “dark cloud” hanging over his son from a centaur, automatically interprets this as meaning Scorpius. You’d think that, if anyone knew not to judge a son because you didn’t like his father, it would be Harry Potter. The Ministry of Magic confiscates a Time-Turner, and a girl claiming to be Amos Diggory’s niece recruits the help of Albus and Scorpius in using it to go back in time to save Amos’ son Cedric. I’m not entirely sure why they went with a time travel plot when Rowling seemed to be consciously avoiding them after Prisoner of Azkaban, but maybe it’s just so they could recreate classic scenes on stage and bring back characters who otherwise wouldn’t be around, like Snape. Actually, couldn’t they have put Snape in a portrait like they did Dumbledore? Also, no Luna Lovegood or Hagrid? Oh, well. The ensuing story is a Back to the Future/”A Sound of Thunder” type of thing, with small changes in the past leading to major upheavals in the present. So when Hermione doesn’t get together with Viktor Krum, Ron never gets jealous, and he ends up with Padma Patil and Hermione a spinster professor. 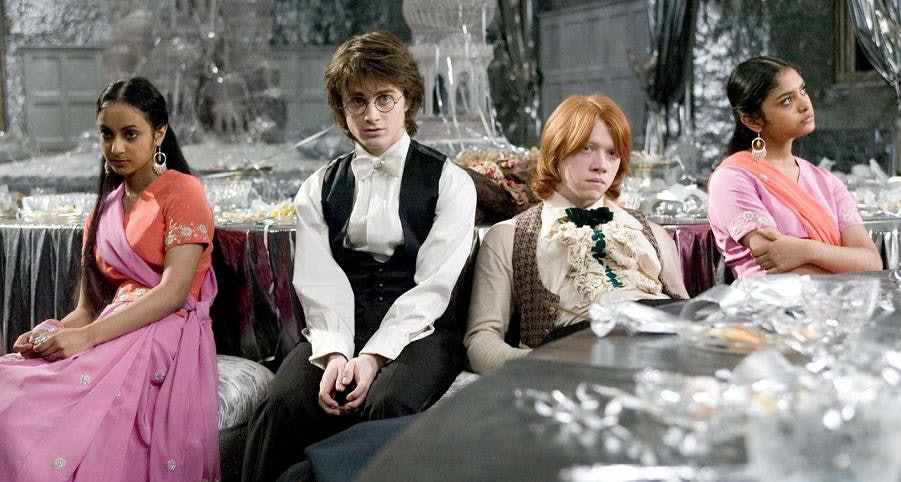 She’s basically Mary in It’s a Wonderful Life, I suppose, lonely, bitter, and educated. So is the implication that your future love life is basically sealed when you’re a teenager? I get that a lot of people who went to Hogwarts together would end up as couples, since it’s a boarding school where they’re forced to spend all day with each other and all, but it still kind of bugs me. And in one alternate timeline, Cedric becomes a Death Eater because he’s humiliated by a time-traveling Albus and Scorpius. So much for his being noble. The script also confirms my theory that wizards do things just because they can and they think it seems cool. Hermione has the Time-Turner accessible to anyone who solves a riddle involving the books on her bookcase. Wouldn’t a combination lock be a lot more effective? There’s also some snarky commentary on certain aspects of the original series, like a comment about how Hogwarts has virtually no security, and Moaning Myrtle mentioning that a sink draining directly in the lake couldn’t possibly be sanitary. (Maybe that’s the actual reason it’s full of monsters. I’m sure that, at some point or other, careless students would have thrown some magical components down the drain.) I wonder if Rowling made these up, or the other writers were making their own comments on her sloppiness. At one point, Albus, Scorpius, and Delphini sneak into the Ministry of Magic the exact same way that Harry, Ron, and Hermione do in Deathly Hallows. Now that Harry and Hermione have important positions there, you’d think they’d implement security to avoid that. Or are they using the Dumbledore method of always leaving a weakness that ingenious kids can exploit just in case those in power are ignorant or corrupt? It’s not the best plot, but it’s pretty cool to see these characters in action again, even if it means finding out the hero of the Second Wizarding War isn’t that great at parenting. Anyway, for all Americans, remember to vote today, and preferably not for Voldemort.