I like to make connections between pretty much everything and the Oz books, although usually the parallels aren’t that close. It works out better when I connect them to The Simpsons. People are saying the show predicted President Trump, which is technically true.

Since he apparently first considered running in 1988, however, I wouldn’t say it’s all THAT prescient. Anyway, I recently asked what Oz character most closely resembles Donald Trump. My idea was Lord Googly-Goo from The Scarecrow of Oz, who’s old, wants to marry a much younger girl, and uses his wealth to influence the King of Jinxland.

Other suggestions included King Skamperoo of Skampavia from Wishing Horse and Dick Tater from Scalawagons. All pretty appropriate, I’d say. In Book of Current Focus discussions, fans speculated that both of these characters might have been drawn as caricatures of Mussolini, although there was no consensus on that.

But then, Skamperoo was unpopular with his subjects before visiting Oz, and it seems that a fair number of Americans actually like Trump for some reason.

All presidential elections in my recent memory have been pretty close. Thinking of rulers in the Oz series for whom public opinion is brought up at all (it often isn’t), they’re generally either universally beloved like Ozma, or reviled by pretty much everyone they rule. The Wicked Witches rule entirely through fear, and their subjects are happy when they die. I guess it’s possible that the wolves, crows, and bees were willing supporters of the Wicked Witch of the West; but the Winkies and Winged Monkeys certainly weren’t. The same goes for Kwytoffle in The Enchanted Island of Yew, Queen Coo-ee-oh and the Supreme Dictator of the Flatheads in Glinda, and Faleero when she temporarily takes over Pumperdink in Purple Prince. That actually applies to the Wizard of Oz as well, but he still manages to remain popular even after he’s exposed as a humbug. According to Tik-Tok, only Kaliko is able to keep the Nomes from rebelling against Ruggedo. The Boolooroo on Sky Island proudly states that he hates everybody and everybody hates him, but his subjects seem to be pretty complacent until Trot and Cap’n Bill show up.

I guess that kind of makes it a white savior narrative, doesn’t it? 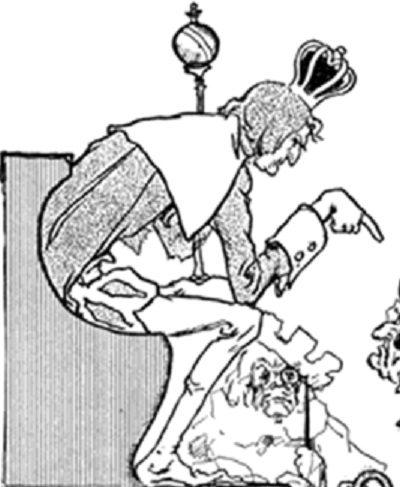 King Krewl of Jinxland is mostly disliked, but does have some supporters who can influence his favor with money (including Googly-Goo), which sounds more like Outside World politics. Then again, much of Oz had stopped using money by that point. King Gos and Queen Cor are said to be dreaded by their subjects, although the raiders in their employ don’t seem to have any problem with them. The people of Rash apparently made several attempts to overthrow Irasha, but the army remains loyal to him. I’m not sure if that’s because they just support the person in charge of the country no matter who it is or that he manages to keep them in his favor through bribes or something. I also feel I should mention the Kinglet of Phreex, King Kleaver of Utensia, and King Bal of Loonville, all of whom have subjects who seem to routinely sass them to their faces with no known repercussions. Well, the Kinglet WANTS to punish his subjects, but is generally either talked out of it or just plain forgets.

And King Ato of the Octagon Isle is flat-out abandoned by his subjects for not being ambitious enough, although they later come back. Jinjur and Gludwig both launch popular revolutions that are initially successful, but turn out to be bad leaders once in power. Gludwig is a problematic character for the racist overtones in his story; but I’d say he’s worth mentioning in that he wears a wig and claims to represent the working class even though he’s rich. Since Trump is both racist and misogynistic, however, I doubt either Gludwig or Jinjur would get along with him.

1 Response to Loyalty to Royalty