Art with Brains and Courage

After my post on books in Oz, Paul Dana suggested that I write one about the performing arts in that fairyland. It’s a good idea, but they aren’t really covered all that much in the books. I’ve looked previously at music in the series, and how L. Frank Baum used the live phonograph to mock the musical styles of his time. As I mentioned there, a lot of the songs that aren’t just impromptu are patriotic ones. In addition to “The Oz Spangled Banner” and “Ozma and Oz Forever,” we are given the words to the national anthems for the Middlings and the Illumi Nation. Also in Kabumpo in Oz, Ruggedo is said to be “playing the accordion and howling doleful snatches of the Gnome National Air.” And Gnome King reports that Scraps has been practicing the Grand March of Oz on Dorothy’s piano.

Other song titles mentioned in the books include “What Oz Is Without Ozma,” “There’s No Plate Like Tin,” and the Ozma Two-Step. An illustration refers to the latter as simply “Oz Two-Step,” or maybe that’s a different song entirely.

March Laumer provides lyrics for the Oz Two-Step in his Fairy Queen. The Shining Emperor Waltz was composed by the Wogglebug in honor of the Tin Woodman. The Scarecrow is said to have an hand-organ in his mansion, Snufferbux can play the accordion, and Jenny Jump says she can sing and play the piano.

In the original stage musical of The Wizard of Oz, the Tin Woodman played the piccolo.

This was never incorporated into the books, and I kind of wonder how someone without breath could make a sound with a woodwind. This despite the fact that he talks, and that usually also involves breath. The members of his court play tin instruments, including trumpets, fiddles, drums, cymbals, flutes, and horns.

Dick Martin did drawings of the Scarecrow and Nick Chopper on various instruments, as well as an interpretation of a scene in Patchwork Girl where the Shaggy Man had a banjo.

Gina Wickwar’s short story “The Harvest Ball” has a long list of characters playing instruments at a party: the Scarecrow on piano, Percy on drums, the Lavender Bear on cymbals, Huffin Puffin on trumpet, Joe King on trombone, Shaggy on soprano sax, Herby on clarinet, Tik-Tok on French horn, Nick and Jellia Jamb on flutes, Jenny Jump on piccolo, Chick the Cherub on glockenspiel, the Soldier with Green Whiskers on the lyre, John Dough on tympani, Scraps on castanets, Woot the Wanderer on tambourine, Ann and Salye Soforth on violin, Tollydiggle on viola, the Frogman on bass, Jinjur on cello, and Handy Mandy on the harp.

One of the inhabitants of Oogaboo grows banjo trees. There’s a band in Tappy Town that plays shoe strings and horns. In Stratovania, bagpipes are popular, and a piper plays a dance tune called the Stratispho. Then there’s Tune Town in Gnome King, where the inhabitants sing and dance all the time, except during intermission.

Led by Queen Jazzma and Bandmaster Oompah, the town is made up of flats with steps that dance, with musical signs marking the streets and trees that bear music notes and play when the wind sweeps through them.

A man named Daddy Linn, with a fiddle body and bow legs, keeps the Viol Inn, which appears to serve only music rolls. The gate can be opened by playing the right chords on the piano, and singing out of tune will automatically take you out of town. Virginia and Robert Wauchope’s Invisible Inzi introduces another music-themed community, Musicton in the Munchkin Country, which seems to be more cacophonous than Tune Town.

And the Musicker, whose name is Allegro da Capo, makes music all the time. While Button-Bright likes his music, most others don’t, so he lives all alone. 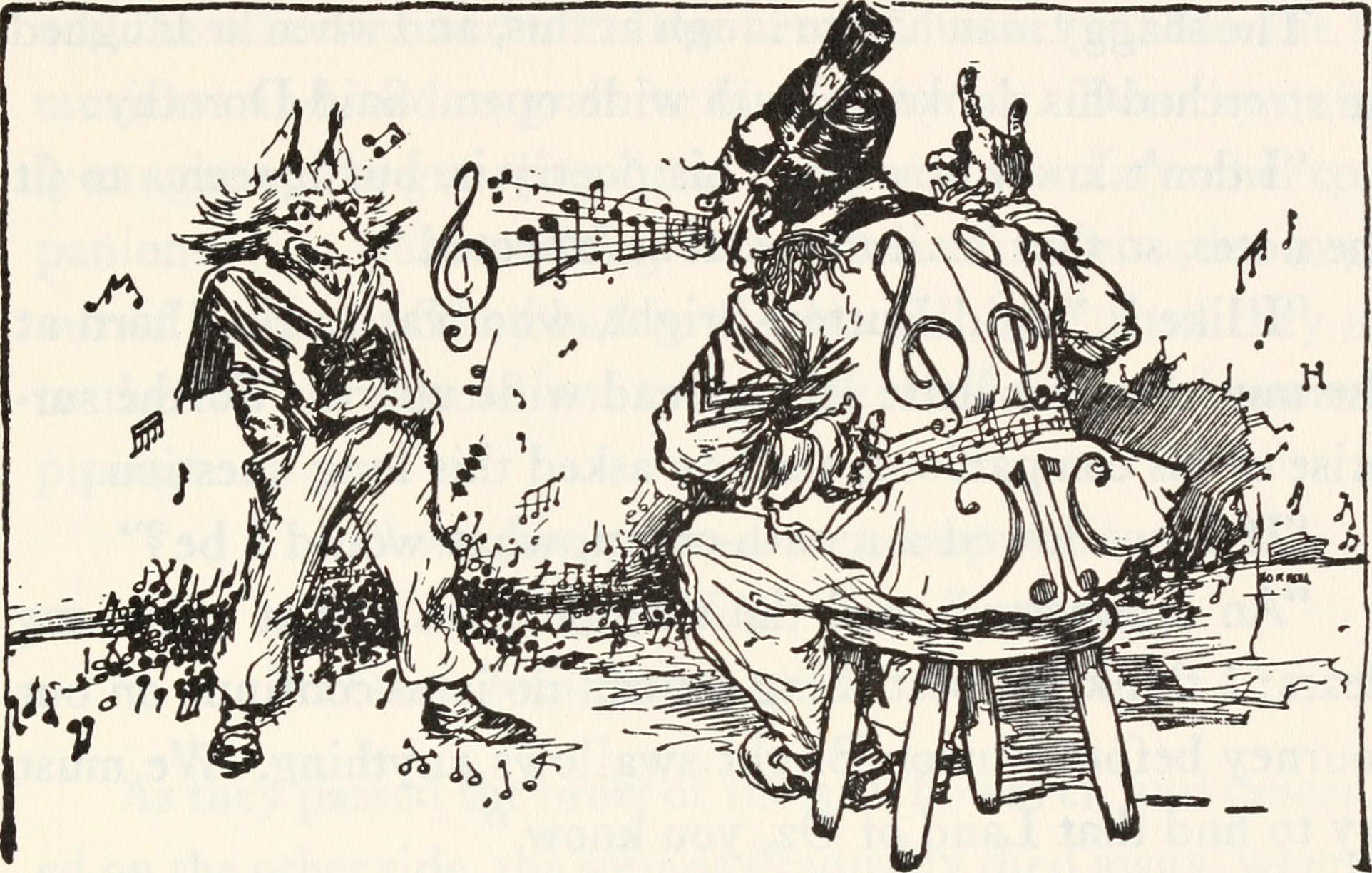 According to Dennis Anfuso’s Astonishing Tale of the Gump, he has a son called Motto von Musicker, who didn’t inherit his father’s ability. Instead, Allegro traded with magicians so they would change parts of his son’s body into musical instruments.

The book that deals with the most heavily with theater is Eloise Jarvis McGraw’s Rundelstone, which features a group of traveling performers called the Troopadours.

They put on a play called Prince Polygon’s Ball, a comedy in two acts about a prince who wants to marry a ballerina. One of the songs from it is called “The Jittery Jig.” About the only other play I can think of is the one that the foxes of Foxville perform in Road. It’s kind of odd that Baum, as an actor and playwright, wouldn’t have had more about theater in his books. We do know from both an Ozmapolitan issue and Eric Shanower’s “Balloon-Girl” that the Emerald City has an opera house. Jinjur apparently demonstrated military drilling there, but I don’t recall any actual Ozian operas being mentioned.

2 Responses to Art with Brains and Courage