A Performance with Merritt

The idea behind the Magnetic Fields’ 50 Song Memoir is that Stephin Merritt would write fifty songs, one for each year of his life. He’s actually fifty-one now, but these things take a while to coalesce. He’s premiering the songs at the Brooklyn Academy of Music over two nights, and I attended the first last night, where the band played the first twenty-five. I figured that was enough for now, although I certainly look forward to hearing the others once the album comes out in March. I just pre-ordered it, and current orders include a print of the album artwork. At the show, Stephin had brief, witty introductions for many but not all of the songs. There was also a projector that played videos for a few of them, and I’m hoping those are also released at some point. I’d seen the band once before, and they switched lead vocals quite a bit at that show. This time, Merritt sang lead on every one, apparently because they were autobiographical. He said that he generally doesn’t like writing autobiographical songs, but realized that such songs don’t necessarily have to be true. Subjects he covered included his unrequited love for a cat his family had as a kid, his admiration for New Wave musician John Foxx, and how he failed and eventually passed ethics class. One of my favorites so far, “No,” was apparently inspired when his mother hooked up with a guru, and expresses skepticism at supernatural beliefs. Another one that stood out for me, “The Blizzard of ’78,” was about he spent said blizzard in upstate Vermont and formed his first band there with two friends. One of the lyrics indicated that they made the Shaggs sound like Yes, and he accompanied the number with the guitar he owned back then, seemingly a bit out of tune. “The 1989 Musical Marching Zoo” marked the founding of the Magnetic Fields in that year, and how he wanted the band to maintain anonymity by wearing animal masks on stage. I don’t know that they ever actually did this, mind you. A lot of the music was electronic, but there were also plenty of live instruments involved, including some rare ones. As I’ve come to expect from Merritt, the songs incorporated interesting arrangements, a lot of humor mixed with some sadness and wistfulness, and unusual word choices.

After the show, the ushers gave out free five-song samplers, consisting of “No” and “How I Failed Ethics,” as well as three songs from the latter twenty-five. You can also hear those songs here. 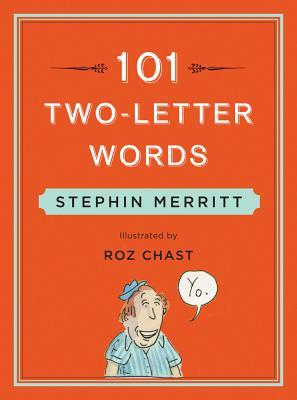 I also purchased a copy of Merritt’s 2014 book (and so far his only one), 101 Two-Letter Words, a collection of very short poems about the two-letter words permitted in Scrabble and Words with Friends, with illustrations by New Yorker cartoonist Roz Chast. The poems and drawings are funny and whimsical, and even include a few running gags, like the Vampire Dog. Merritt mentions Edward Gorey as an influence in the introduction, and there are hints of Ogden Nash and Shel Silverstein as well. Here, you can see Merritt and Sam Davol perform musical versions of “Lo” and “La” in front of a rat terrier named Lola.

1 Response to A Performance with Merritt