I found the subject of this post a few months ago while looking for information on fairy lore from the Caucasus (I’m hoping to use it in a story I’m writing, but that could be a long way down the road), but I decided to save it, as it has a connection to Christmas. This is the Kallikantzaros, a sort of underground goblin that features in the folklore of Greece and the surrounding lands. It’s not entirely clear what Kallikantzaroi look like. They generally seem to be thought of as small, or at least able to take diminutive forms. Some references give them tusks, goat hooves, horse legs, and/or long black tails. 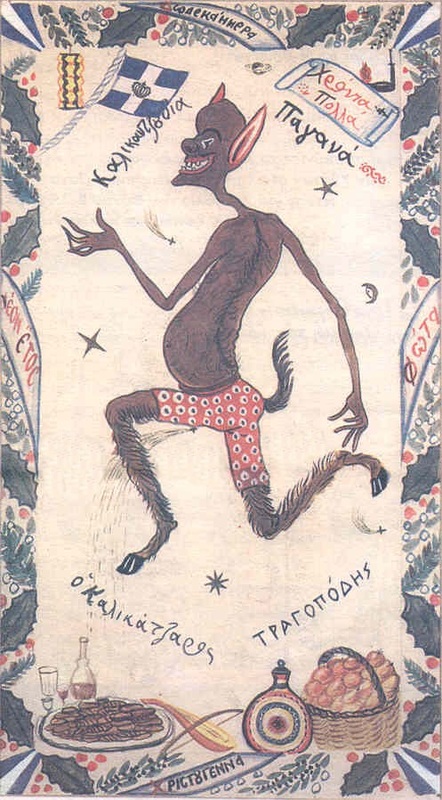 And I guess they wear really tight pants.
Apparently they tend to talk with a lisp, and eat worms and frogs. As they live underground, their eyes have a lot of trouble adjusting to light.

The Kallikantzaroi are said to spend most of their time trying to cut down the World Tree, but when the twelve days of Christmas come around and there’s less sunlight than at the rest of the year, they go above ground and play tricks on people. There are a few different ways that people had for driving off Kallikantzaroi, including keeping a fire burning, setting fire to smelly shoes to drive them away, and placing colanders on their doorsteps. Like vampires, these goblins are apparently so obsessive-compulsive as to have to count any large number of things, like holes in a colander. Unlike vampires, however, they’re unable to count past two, allegedly because they consider three to be a holy, and hence forbidden, number. I’m not sure why they don’t just use 2A, like Discworld wizards do with the number eight. Any child born during the twelve days might turn into a Kallikantzaros, but this can be prevented by binding the baby in garlic or straw, or singeing its toenails. And people born on Saturday are better able to see and communicate with the creatures.

When Epiphany comes around, they return to their underground dwellings, only to find the World Tree has grown back. It’s sort of like Wu Gang and the lunar tree, or to hit closer to home, the myth of Sisyphus. Well, except Wu Gang and Sisyphus are forced to perform their eternal labors, and I don’t know that the same holds true for Kallikantzaroi. Maybe they just get bored, and the tree happens to be there.

The creatures appear in the tale of Kallo and the Goblins, in which the titular girl avoids being eaten by making the goblins fetch her fancy clothes and accessories until the sun rose. It’s a more fashion-conscious version of Thor and Alviss, I suppose. I don’t think the term “Kallikantzaros” is specifically used in the story, but it’s obvious from the description that this is what they are. It’s interesting that the name of the heroine so closely resembles the beginning of the goblins’ name. And could there be a link with Kaliko, the Nome from the Oz books? He also lives underground, although he’s much less malicious (well, except in Rinkitink in Oz). 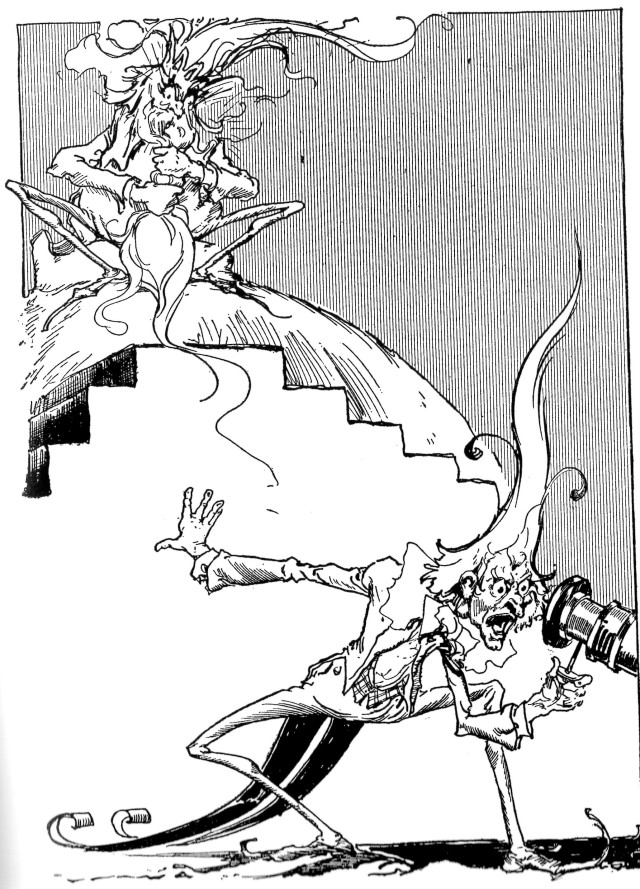 The Greek kalos means “beauty,” which would fit Kallo, but not so much the imps. Calico (the fabric and hence the pattern of cat colors), on the other hand, comes from its origin in Calicut, India, now officially called Kozhikode. I also don’t think there’s any connection to the Hindu goddess Kali, whose name is linked with words for “black” and “time.”